You are here: Home / Economy / Political Leaders Seek Consensus on Energy and Sustainability Issues at Un-Debate

Political salvos were set aside as the four major U.S. political parties gathered at the first joint Leaders in Energy and Potential Energy DC “Un-Debate” on Energy and Sustainability on Thursday September 15, 2016. Over 100 people attended the event that was hosted at the Washington, DC campus of New York University and was sponsored by the Association of Energy Engineers National Capital Chapter and Taylor Strategic Partners. 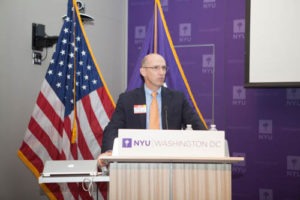 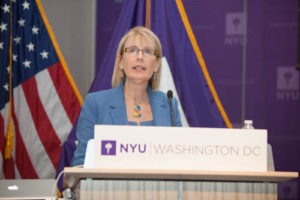 Janine discussed how the traditional debate point/counterpoint format, which encourages opposing sides to prove each other wrong, may be leading to increasing polarization and gridlock. She cited Deborah Tannen’s book, “The Argument Culture – Stopping America’s War of Words”, which points to how our society has become overwhelmingly adversarial, with consequences in our ability to solve problems. The author makes a compelling case that we need to move toward a more constructive dialogue, particularly as our problems become more complex.

The “Un-Debate” was set up to encourage dialogue to foster a marketplace of ideas and to work toward a shared understanding. Four parties were invited to participate.

The panel was moderated by Jan Brinch, an energy consultant and a professional facilitator, with the assistance of Dr. Alexander Dale and Kerry Worthington. The four parties were represented by:

Read more about the panelists here.

Jan opened the discussion by asking each of them to describe their philosophy to the audience. Charles gave his opening statement by underscoring his “firm belief in free markets” and the “need for fiscal responsibility.” He finds inspiration in the tradition of conservationist Republicans like President Theodore Roosevelt. Government should do what it can with what it has and operate within constraints while thinking of the common end goal. If these conditions are met, Charles said, the economy will grow faster than with any other model.

Chris stated that he is a strong believer in “evidence-based decision-making.” He values looking at the evidence and cost/benefit analysis to make the best decision. He said this is especially critical for important policy questions like climate change, fossil fuel dependent energy systems, and national security.

Arvin believes in the need to build an environment where the adoption of technology is user-driven. He advocated for a light approach for government involvement in the energy sector, including through the repeal of fossil fuel subsidies and of laws such as eminent domain.

Tim believes the country has seen great progress in renewable energy in recent years – it has been the biggest source of new energy capacity – but he also believes that other countries, particularly in Europe, are far ahead of the U.S. He argued for the establishment of a Green New Deal, a policy that would need strong political commitment to make it happen. Such a policy would need to modernize the electric grid to be super-smart.

Jan’s first question to the panelists was if they saw areas of consensus budding among them.

Tim said he thought there could be consensus on removing subsidies in the interest of having more of a level playing field. Renewable costs are coming down so fast, Tim added, that if renewables were on a level playing field with traditional energy sources, we would all be moving toward them. Charles agreed that the government could do better at inserting sunset clauses for certain subsidies.

Tim and Chris were more optimistic about the role of government in promoting renewable energy. Chris believes that someday, the emergence of the latest “cool” energy efficiency technology is going to be something consumers get excited about like a new iPhone release.

Arvin agreed that the government should take its hands off of policy, particularly by cutting subsidy programs. He believes that energy efficient buildings can be promoted by removing those policies that prop up the bad parts of the energy system.

Staying on the topic of how to promote a more level playing field for renewable energy to be able to compete, Jan asked the leaders if the policy levers include pricing carbon and cutting subsidies to the energy industry.

Chris agreed that the energy playing field is unequal. He believes the question of whether carbon has a value is something that should be debated.

But the panelists in general were either restrained about the chances for a carbon tax or outright opposed to it.

Arvin in particular does not feel that carbon pricing is the right solution. According to him, those policies result in favoring the largest companies who are able to maneuver themselves in order to avoid the costs of regulation. Charles added that at the strategic political level, those interested in a more favorable playing field for sustainable energy can either keep waiting for a solution for carbon pricing, or they can look at other ways to level the marketplace.

For his part, Tim was skeptical about the idea that the ethanol industry would give up subsidies without a fight, calling it a “pipe dream.” He later added that subsidizing corn-based ethanol is a “terribly inefficient” policy, and that ethanol subsidies are a good example of why it is important to take into account the full impact of any policy.

Jan opened up the session for Q & A, and the first question was about the government’s role in transport efficiency, including the renewable fuel standards.

Charles believes that standards for energy efficiency and renewables must evolve over time to keep up with rapid change.

On Electric Vehicles (EV), Chris believes the move to EVs will be a real game changer in U.S. transportation. Arvin agreed but said he is not a fan of subsidies for EVs. He believes that removing all subsidies can level the playing field and spark innovation. If people stopped using electric vehicles or other modes of transportation and simply stayed home for work, people might begin to gravitate more toward virtual offices, which he argued could have a much lower environmental impact.

Another question turned the discussion to the role of the military in promoting energy innovation, both through its policies, programs, and research as well as through its role as the largest consumer of energy in the federal government. Energy is also an important national security issue for the military.

Arvin echoed that the military invests a lot of resources in energy innovation but pointed out that private companies have often taken these projects to the next level. Since he believes that the private sector is best positioned for research, he argued for getting rid of military research and development programs. Chris provided a counterpoint, highlighting the role of the military as one of the institutions that is best positioned to invest in innovation, energy research, and testing the deployment of technology, something that the private sector might not be able to do because of costs.

Tim spoke about some of the larger issues facing the military in terms of the danger of global warming and the threats it poses to military installations around the world. The military has also recognized the need to invest in renewables because it consumes so much energy. Tim believes that the military budget should shift further toward green R&D.

Taking a step back, Charles philosophized that investing in sustainability can be an important input for solving other national security challenges like peace and poverty. Such investment can help to create the conditions that can promote stability around the world.

Tim believes that sustainability is “the issue of our time.” Chris agreed that it is a really exciting time for energy and sustainability policy, and added that it was refreshing to have the chance to talk about these issues.

Arvin asked the audience to consider the following: “What is the thing that will bring sustainable technology?” The answer, he said, is human genius, and “it can’t be forced or bought.” To him, the government needs to get out of the way and get rid of barriers that prevent that genius from flourishing.

Jan summarized the discussion by listing some areas of potential consensus among the four political parties, including the promotion of energy efficiency and removing or sunsetting incentives/subsidies in order to level the playing field.

Energy issues are vast, complex, and very difficult to tackle in one hour of discussion. Prior to the event, audience members were asked to send the issues that are important to them and that they want to hear more about, particularly in terms of what the parties’ positions are. Here is just a handful of what we heard: 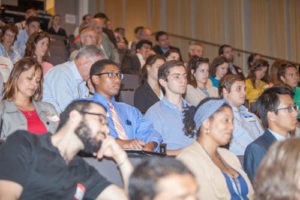 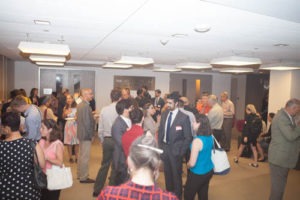 The “Un-Debate” panelists were prepared in advance with materials, including a list of potential areas for agreement, to assist their thinking for the discussion.

Some of these topics were pulled from the bipartisan energy bill working its way through Congress – the Energy Policy Modernization Act. A list of “policy levers” was also provided with solutions that included loans, taxes, subsidizing through direct payments or reducing taxes, simplifying regulation, repealing legislation, and more.

Dave and Janine brought the discussion to a close. As a closing observation, Janine felt that there’s a hunger to collaborate on these issues and left the audience with her hope that this spirit of dialogue could help to bring consensus at the national level.

Thank you and best of luck to the panelists! Leaders in Energy and Potential Energy DC are non-partisan organizations, but both are committed to supporting healthy dialogue on important energy and sustainability issues. Finally, thank you to our sponsors, without which these events could not take place.