You are here: Home / energy / Campus sustainability commitments in action 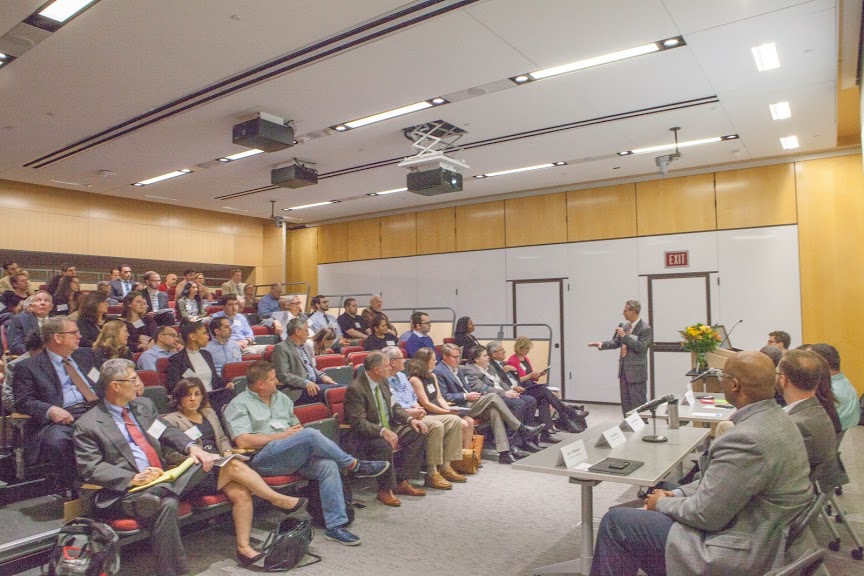 By CAROLINA PENA AND TRAVIS HIGH

As colleges and universities commit to long-term plans for campus and system-wide sustainability, energy efficiency measures, and renewable energy generation, success stories and lessons learned have emerged in some of the biggest campuses in the Washington, DC region.

Campus sustainability managers gathered at the 3rd annual Energy and Sustainability Extravaganza at The George Washington University on February 24, 2017. The Sustainable Solutions panel was moderated by Julian Dautremont-Smith, Director of Programs for the Association for the Advancement of Sustainability in Higher Education (AASHE). The panel included:

As a representative of one of the leading university-led initiatives to “inspire and catalyze higher education to lead the global sustainability transformation,” with nearly 1,000 members, Dautremont-Smith was well placed to moderate the session. He said that almost 600 institutions have made commitments to carbon neutrality via Second Nature – an organization that links higher education leaders who have made climate leadership commitments.

At Georgetown there is a goal of 50% reduction of GHG emissions by 2020, which was met in 2014 by purchasing renewable energy certificates. However, Stewart adds that, being a Jesuit university, the leadership was motivated by the call of the Pope’s Encyclical on climate change to keep pushing forward. The university continues to seek new opportunities for efficiency, conservation, and investments in new renewable power.

UMD embarked on its journey in 2007 following the university President’s Climate Commitment, with the goal of decarbonizing the campus and cutting emissions, focusing on energy. UMD has a 20% energy conservation goal for 2020, and new building developments are to be carbon neutral. Over the border in DC, UDC has aligned its sustainability goals with the ones established by the DC government.

In 2014 AU, GW, and GW Hospital launched the Capital Partners Solar Project partnership that created a renewable energy initiative tapping into solar power from North Carolina to meet a significant portion of their energy needs and reduce their carbon footprints. For GW, the project accelerated the university on its journey toward the carbon neutrality target set for 2025. And in 2016, for the first time, more than 50 % of AU’s power was sourced from solar energy, as a result of this innovative initiative. For its part, UMD aims to reach 100% purchased renewable energy by 2020 and is making good progress.

For several of the local universities, energy efficient buildings are a priority. Georgetown, UMD, NOVA and UDC have planned new construction with a carbon neutral or LEED Certified approach. Investments are being made in energy efficiency upgrades or retrofits.

At AU new buildings are also increasingly being designed to be LEED certified. AU’s Allen said that the university looks at not only the design and construction of environmentally appropriate, cost-effective buildings through LEED certification, but also at the larger question of how to live more sustainably in a college setting. During holiday breaks, for instance, the power is switched off in order to save energy during this period.

UDC’s Thompson explained how the university planned the new Student Center as part of their ten-year campus master plan. Construction of the new student center building is on track to reach LEED platinum certification. The building’s design makes sure the sun’s energy can be captured and used to save on utility costs. Inside the building there is as much natural light as possible, and the building harvests daylight throughout the day.

If that’s not enough, the building is constructed on top of a metro station. This location has helped with changing people’s behavior from commuting by car to commuting by metro.

Opportunities for innovation and learning

Higher education is often seen as a laboratory for real life, and many of these institutions have sought to maximize the learning potential of students by encouraging them to participate in projects. At AU the faculty members research sustainability on and off campus, including projects like the effectiveness of green roofs on pollution control. Georgetown provides hands-on experience to students through internships, class projects and extracurricular clubs, engaging students as leaders in designing and implementing campus sustainability initiatives such as a new green-space on campus.

GW is holding a unique solar design competition for students known as Charged up, with a prize of up to $10,000 for the winning team to build a solar charging station on campus. This project combines the university’s campus sustainability goals with practical student experience in renewable energy innovation.

More and more, as the panel shared their experiences, it became clear that universities are looking for innovative solutions to the challenges they’ve encountered as they try to put in practice ambitious sustainability commitments.

UMD, for instance, is looking into Algae-based carbon capture technology that can absorb NOx and SOx in order to decarbonize its Combined Heat and Power station on campus. Because of the substantial heating needs, UMD operates a natural gas cogeneration plant. If successful, the cellular byproducts of the algae could even result in a profitable enterprise for the university.

Meanwhile, at UDC, the university has installed a geothermal well field under its soccer field and pipes the water through the parking garage to mechanical systems as a way to save on energy costs.

For NOVA’s Johnson, the challenges of embracing sustainability remain high. As an “office of one,” his job consists of a lot of convincing different stakeholders to take action. Nevertheless, the community college is moving forward in areas such as energy conservation, utility management, and commodity analysis. As a commuter college, the largest GHG emissions are from commuting, so some of their programs are in ridesharing and transportation. 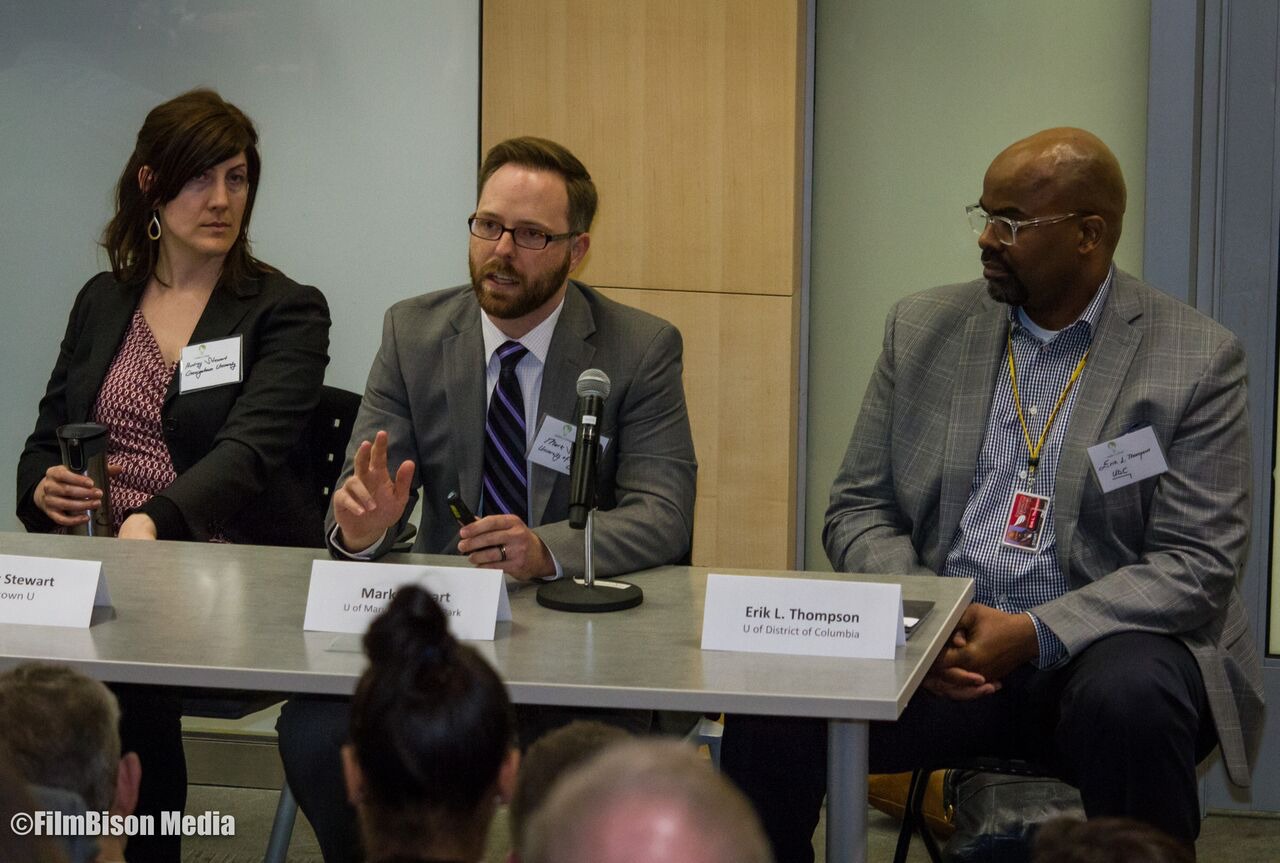 Role of the sustainability officer

GW’s Chapple said that the role of a sustainability officer is to make change, and Georgetown’s Stewart said they serve as a resource and catalyst. But reflecting on the fact that many sustainability officers serve in an “office of one” or as part of a small team, the observer could be forgiven for reaching the conclusion that it’s challenging work. Driving all of this change in universities across the nation, according to Dautremont-Smith, is the high level of interest from students, faculty, and other stakeholders. High demands surely put a lot of pressure on these programs to deliver results.

Chapple opened her remarks by giving a background of the GW sustainability program, which was initially led by students. However, she said, when push came to shove, the success of the GW program also came from the strong leadership of the university’s management team, the setting of clear goals and targets, and building a collective vision.

Higher education has the responsibility to provide sustainability leadership in every aspect, from operations to research and development and practical instruction. Students need to be empowered to be the change agents that the world needs. Programs on sustainability, energy conservation, and clean energy that universities are increasingly providing offer valuable learning opportunities for students and can inspire innovative solutions for clean technology, improve the campus environment, and contribute to mitigating global climate change. 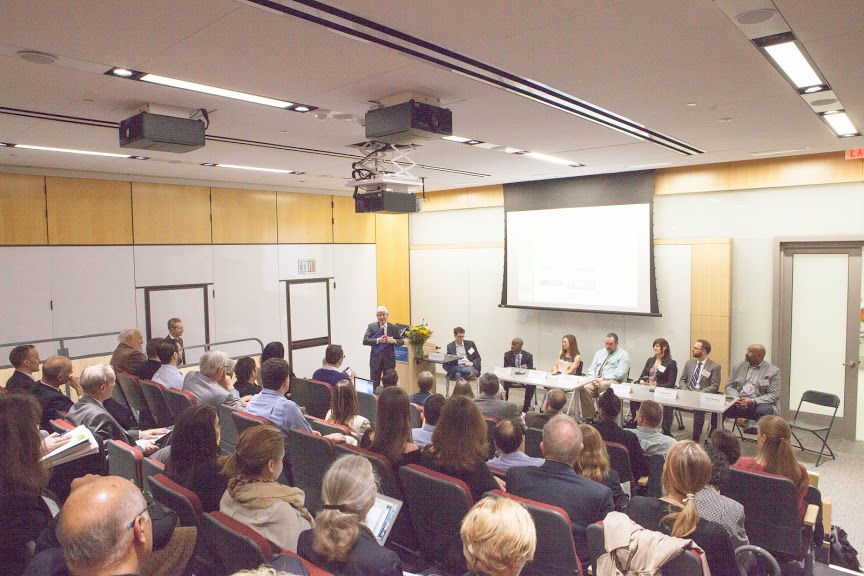 The Energy and Sustainability Extravaganza featured a series of panels, including a CWEEL luncheon, presentations by university sustainability officers and by vendors with sustainable solutions, town hall discussion with government leaders, and networking reception.