By CARLA A. FLEMING, Chief Marketing Officer for Leaders in Energy

At a ceremony honoring “White House Champions of Change ─ Faith Leaders on Climate,” five themes emerged which may be of interest to others who seek to lead and make an impact.

I had the pleasure to attend the celebration of the White House Climate Faith Leaders Champions of Change event on July 20, 2015. The 12 Champions of Change, from many faiths, shared their journey to focusing on taking action on climate change. For some, the journey started as a youngster interested in the environment. Others came to it mid-life as a part of an initiative within their congregation. Still others were activists driving change in women’s rights, civil rights, and voting rights before connecting the dots for how the climate and the environment are integral to the issues they currently care about.

Over a series of two panels, one on Greening Communities of Faith, and a second on Faith Advocacy for Climate, the champions discussed why their involvement mattered, the impact it has had on them, and their congregations, and how congregations across the country can get involved with just one person or one project.

For me, there were five key takeaways:

Huda Alkaff, who leads Wisconsin Green Muslims, wanted to be an environmentalist since she was a child. Working with 200 youths, each month they picked a different environmental topic to focus on such as climate change in February. This past March, they concentrated on reducing water by setting water reduction goals and measuring their results at the end of the month. By establishing rotating topics, they’re able find determine what worked well, where to improve, and determine new goals for the following year.

Steven Breumer, an active member of St. John Evangelical Lutheran Church in Florida, said their first Earth Day sermon came out of a simple effort to clean out a storage closet. By recycling the content, they collected 914 pounds of e-waste. The Earth Day service message focused on “Care for Creation.” As a result, more church members have gotten involved. “This wasn’t a political issue,” he said. “[It was] a moral initiative with instruction from the book, “said Breumer.

Rev. Kim Morrow, Executive Director of Nebraska Interfaith Power and Light, said, “People are afraid of being called to task because of starting sustainability programs.” Morrow suggested people can start with something as simple as food by organizing a potluck lunch and cooking class on Saturday. “A wholesome community-based [program] can transform the world,” she said.

Rev. Lennox Yearwood, Jr., President and CEO of the Hip Hop Caucus, and Church of God Elder and a former White House Intern, said “For too long, black folks have been the least [of all]” He notes seventy-five percent of blacks are exposed to coal fired plants and called for the divestiture of fossil fuels. “[We’re] fighting for this generation and next generations,” he said.

“We’re connecting old school and new school,” he said. “The next generation gets it. Young Republicans get it. It’s about humanity,” said Yearwood. “Fossil fuel is running out by 2065-2075. It will be catastrophic. We need to move beyond old guard.”

Rev. Dr. Durley, former Dean of Clark Atlanta University, the former director of the Health Promotion Resource Center of the Morehouse School of Medicine, and former pastor of the historic Providence Missionary Baptist Church, worked with Dr. King on civil rights, human rights and voting rights. However, he admitted he had to be tricked into working on climate change. Durley notes, “[I] can’t get to my civil rights if I can’t breathe. You must be willing to risk and sacrifice,” he said.

Durley said, “The young people don’t carry the baggage the older generation [does]. They’re free and transparent, not tainted, but transparent.”

Patrick Carolan, Executive Director of Franciscan Action Network, noted activism is an individual activity. He highlighted meatless Fridays is one way people can connect to climate change. With a focus on the Paris COP 21 in November of this year, Carolan noted they’re hoping to get 10K signatures. Several weeks ago, 125 young adults came together to meet in Rome, said Carolan. These are people who got involved in climate change and were from all different faiths. They know this is the future. “First transform individuals, communities, and then leaders,” he said.

Rebecca Lamb, Chair of the Steering Committee for Young Evangelicals for Climate Action, noted her organization focuses on individual, young people under 30 and benefits college students. Lamb said the Climate Leadership Fellows Program combines climate, environmental and faith issues for students interested in demonstrating to the university community that these issues are connected. Students who go through the program address environmental issues not being addressed by their university, she said. They are mentored, equipped and supported throughout their projects. She said, “Some of the schools don’t have recycling programs.” Her organization works with students in the US and overseas, and partner with bilingual universities in the Congo. “Common hope is where [you] find support, said Lamb.

For Rabbi Marc Soloway of Congregational Bonai Shalom in Colorado, he said “Planning for high holidays, who cares what I say.” However, congregants did care because three sermons led to members of his congregation taking action. A Rosh Hashanah sermon led the creation of an environmental group focused on zero waste which has become the policy of their synagogue. Another sermon led to the creation of the Interfaith Community Supported Agriculture Program to collect food left in the fields for those in need. The third, a Yom Kippur sermon, led to a focus on development of a vegetable facility.

“People feel very disenfranchised from Judism,” said Soloway. The coming-together-with-the- environment helps people come together.” He noted it has also transformed their relationship with food. Soloway stated, “Leaving four corners of the farm for the poor is a donation. It makes the Torah message on food real.”

Sister Joan Brown, a Franciscan Sister from the Rochester, Minnesota Franciscan Community and Executive Director of New Mexico Interfaith Power and Light, shared with us, that “enthusiasm and persistence in the trenches” can be the motivation for people to join an initiative. She noted, one member of an Episcopal church was the driving force for their diocese to put solar panels on all of their buildings. She said there are many tools available for churches, including the EPA Energy Star Publication for Congregations.

Nana Firman previously worked with the World Wildlife Fund in Indonesia and was recognized for her work on climate change initiatives in Indonesia, after the tsunami. She saw the devastating disasters and was focused on helping with sustainable construction. “They’re very religious,” she said. She wondered how she could work with the community by engaging their hearts. That question led her back to her own faith. And that’s how she engaged with them ─ by protecting the earth and making it better, which included planting trees to replace those that had been cut down, she noted.

Al Sharpton, Founder of the National Action Network, opened the event with remarks. The reason he’s involved is because African Americans are disproportionately interested in this issue. “For citizens to lead healthy, productive lives, a focus on the environment is key.” he said. “We breathed it every day. We’ve lived it everyday,” he said. “[We] can’t deal with climate change without dealing with it as a health issue and as a civil rights issue,” he said. The Champions of Change “champion all our our rights,” said Sharpton.

Cassandra Carmichael, Executive Director for the National Partnership for the Environment, spoke of working across faiths for years. “We walk separately together. We walk together as we try to accomplish their share of the mission [on climate change],” said Carmichael.

Sunita Viswanath, co-founder of Women for Afghan Women, and founder of Sadhana, felt her work on Women’s Rights didn’t incorporate her Hindu religion with social justice, specifically the environment. As a result, she established Sadhana, an organization that encouraged faith in action by the Hindu community.

One initiative focuses on religious offerings given and placed in the waterways and the need to clean up the water. She speaks with priests and devotees; they recognize this as an issue and each month promote the clean-up of the waterways. “Right in front of our eyes, we see the change happen, people, when asked not to put their offerings into the water” so they don’t pollute the water. Our suffering can lead to action,” she said. 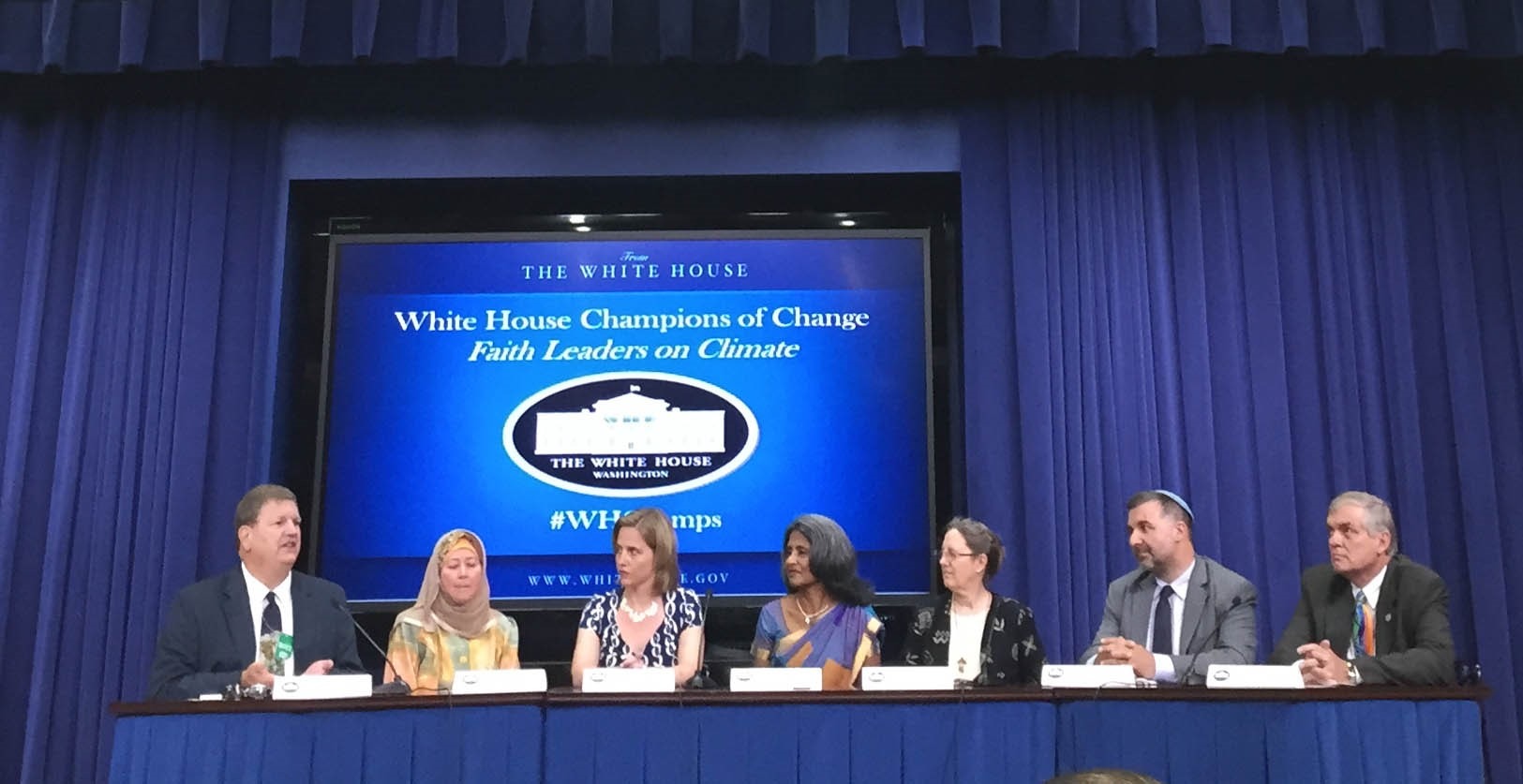 He said they’ve experienced with what it’s like to model faith, community and government can do. That example is Gina McCarthy, the EPA Administrator. They’re promoting “dialogue that leads to action and affects everyone,” said Reyes. “We have to be honest about [the] dangers {we are] facing, what each [needs] to change about ourselves. The conversation must go beyond those that don’t serve the common interest,” he said.

“The solution is to go beyond technical and speak to the human spirit. [We] need to move to a change of heart. Everything is connected. The Pope condemns a throwaway culture-both products and human beings,” he said.

Climate Change is an Opportunity for Communities and Jobs

EPA Administrator, Gina McCarthy, spoke to the Champions of Change and attendees. McCarthy said, “I’m so tired of hearing that giving people clean water and clean air is a burden. That will never happen in any rule I sign.”

McCarthy notes, “If we actually embrace climate change, we can make not just the world sustainable, but jobs sustainable. The challenge is to look at this as an opportunity. If we embrace safer communities, more jobs [are] accessible,” she said. “Let’s connect the dots that have never been connected before,” she said.

What I loved about the event was the passion of each of the speakers, especially EPA Administrator, have for affecting change. It’s a reminder to me that regardless of what your interests are, the issue of climate change touches every one of us– whether it’s healthcare, zero waste, voting rights, women’s rights, or even if it’s been a life-long interest in the environment—and we can all engage to take action.

Resources Are Available for the Religious Community

Brian Deese, Senior Advisor to the President, noted there are resources available to help religious communities to take the next step without reinventing the wheel.

Partnership for a Common Good

Cities of The Future: Integrating Climate Planning and Smart TechnologiesBuilding a Responsive Energy Infrastructure for the Future

‘So What Are You Waiting For?’ Say Climate Campaigners After IEA Says Solar Now ‘Cheapest Electricity’ in Human History