You are here: Home / Economy / Smart Cities Event: It Takes a Village to Build a Smart City

By KERRY WORTHINGTON, Leaders in Energy

Whether it’s using existing resources more efficiently or developing new technologies, everyone can be involved in building a smarter city. At least that is what many were pointing to at the Leaders in Energy’s “Building a Smart City: Global & DC Metro Area Perspectives” professional networking event on September 15, 2015. Members of the audience came from all walks of the sector, amateurs to professionals, looking to learn more about the topics, ranging from distributed energy to urban design, and to understand what global and local players are doing to build a smart city.

Carla A. Fleming, Chief Marketing Officer for Leaders in Energy, opened the event by making an analogy of sustainability and renewables being the Apollo moonshot of today. The prime difference being that the Apollo mission was selective and government led; whereas everyone can be involved in the sustainability and renewable movement and building our smart cities! Instead of framing this movement as a competition with another country, the urgency is for the health of the planet, sustainable jobs, and a sustainable lifestyle.  Carla also prefaced the session by saying that the panelists would take a look at “smart cities in terms of impact on the consumer, but also as a city, as a whole.”

Janine Finnell, Founder of Leaders in Energy and Clean Energy Ambassador, moderated the session, introduced each speaker and also provided insights into investment decisions made by the U.S. Government. She also took an informal survey, asking the audience how many of them had lived largely in cities throughout their lives. A significant number of the audience, around 80%, raised their hands.  Janine reflected on this by citing statistics that currently half of the world’s population dwells in cities and that this is projected to increase to 70% or more by 2050.

“How do we build a Smart City? We don’t know,” said Bill Maguire, Project Director for US Ignite and liaison to the Global City Team Challenge, in his opening remarks. US Ignite is a nonprofit inspired by a White House initiative to share best practices and resources that accelerate innovation and transformation in the U.S. The Global Ignite initiative aims to work with cities to deploy technologies that solve water, air, and energy efficiency sector issues. The Global City Team Challenge was created to promote the development of Internet of Things (IoT) technology related solutions.

The Challenge convenes project teams, matches them with potential partners, provides a webspace to showcase their work, and gives 10 months for teams to prove their methods. The project teams challenge themselves to use new technology, existing infrastructure, build off the government platform, and build global, inclusive teams. The program supports the teams and promotes how the teams are using testbeds that governments can catch onto. With the carrot – funding – and stick – regulation – approach used by governments, government support is vital and US Ignite sees “governments as a playground.” The truth of the matter is that in developed cities, “we can’t just build more, we have to use what we have smarter” Maguire noted.

Although “the Internet of Things” has a specific, technology driven definition to Global Ignite, it really spoke to the human and social interaction, collaboration, and sharing that is required to build an efficient and effective Smart City.

Take Amsterdam for example, which has always been an internationally-minded city and, in recent years, has served as an inspiration to many as a model Smart City. Bart De Jong, Counselor for Infrastructure and Environment at the Royal Netherlands Embassy, noted that with 17 million people in the Netherlands, about the geographical size of the state of Virginia, and with half the country below sea level, precisely the area where the major urban areas are found, smart city development comes as a necessity.

Amsterdam, where one district is designed to become 100% carbon neutral, offers some best practices that support its reputation. The city developed a strategy/vision for 2040, its technology is built to the conditions of the site, and the city developed networks for better exchange of best practices among professionals. Leadership in smart mobility and a sharing economy (appliances, cars, etc) are some examples of the result of Amsterdam’s strategy, which centers on these key areas:

An important lesson learned from the experiences in Amsterdam and other Dutch cities is that smarter technology is not the exclusive path; some challenges can be overcome with existing technologies. Furthermore, the implementation of smart city technology often needs to be facilitated from the top, but its success is always dependent on the bottom-up contribution and incorporation of ideas from local communities.

Amsterdam also participates in the Global Smart City and Community Coalition with the U.S., Italy, and Indonesia. The Dutch King and Queen visited Washington in June 2015 to launch the program. Although Washington, DC is not yet in the Coalition, Chicago, IL, Austin, TX, and Charlotte, NC are.

Kevin Kampschroer, Director of the Office of Federal High-Performance Green Buildings at the U.S. General Services Administration (GSA), took a deeper dive into consumer behavior. A key success factor in the Green Buildings program, he noted, is that consumers – in this case the building managers of federal offices, but also ordinary government staff – have to want to participate in energy-saving practices, and the system needs to be built “based around human behavior.” He used the example that if a building has automatic lights, they tend to go on when you enter the room; the human should have the option of turning lights on—if needed—and not have the system automatically turn them on. We need vacancy sensors, not occupancy sensors. The system already remembers to turn them off.   He said that we need to “give people the opportunity to behave in a way that makes sense.” Systems should be designed around people’s behaviors for the technology to be successful.

Kampschroer gave a shocking statistic that 50% of office buildings in the U.S. are empty, and that very little may have to do with the location of the buildings; mostly it is because we are not using the buildings’ capacity effectively.   We all —federal, state, local governments and commercial tenants — need to examine how to use them in an efficient way, and identify “why people come to work.” The WeWork space, formerly the old Wonder Bread Factory in Washington, DC, is an excellent example of repurposing existing infrastructure. A key part of Kampschroer’s work is rethinking the use of space to accommodate smart people in smart buildings.

On a U.S. county level, Montgomery County, Maryland, has developed a “Thingstitute,” led by Dan Hoffman, Chief Innovation Officer, to support entrepreneurship and innovation around Internet of Things technology. Indeed, the Thingstitute is participating in the Global Cities Challenge.

The Thingstitute programs bring together entrepreneurs, local government, corporations, educational and non-profit organizations to provide a “safe place to fail” for innovation. To Hoffman, the volume of projects is more important than quantity of successful projects; although they are hopeful that every project will get off the ground and move to another department in Montgomery County. The “Thingstitute” is not your “standard government project.” Hoffman hears pitches on smart lighting projects twice a month – which are almost best practices today. The criteria for innovation are that each proposed project:

In a county with over a million people and many potential priorities, underserved areas, including agriculture (a third of the geography of the county is agriculture), retirement homes and correctional facilities, are the priority for these Thingstitute projects. The idea with improving correctional facilities is community oriented. County leaders believe that if rehabilitation is done correctly, there can be a huge cost savings for society, on top of it being the right thing to do. The Thingstitute accepts applications on a rolling basis.

During the question and answer period of the program, many participants were eager to know more. The panelists emphasized behavior science; that there have been more successes with technologies that are built around consumer behavior than those technologies that require consumer behavior to change. Additionally, smart city implementers should be aware that the public’s acceptance of government programs varies. Audience members complimented the Netherlands on building awareness of sustainability at young age, which nurtures the young citizens’ behavior and mindset, which is then brought into the global space. Other questions from the audience included district heating and cooling systems related to buildings and sustainable transportation systems, such as the widespread use of bicycles in Amsterdam (referred to by some as the “Bicycle Capital of the World”) as compared to Washington, DC.

Connections and community building were key elements at the evening’s event. The program not only revolved around implementing networked technology, but also of the professionals in the room. Many attendees had the opportunity to pull the speakers aside for personal questions, as they stayed until late in the evening. Some were eager to know more about the Global City Challenge and The Netherlands, and others were interested in being a part of Hoffman’s Thingstitute and learning more about buildings as a part of Smart Cities.

Our sponsor was Budderfly, a building efficiency management system, and co-hosts included WeWork, which provides shared office space for entrepreneurs and DC Net Impact, a network of socially and environmentally responsible professionals. 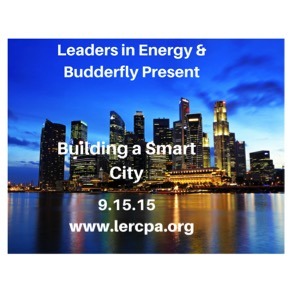