You are here: Home / 4 Gen / Recognized by Leaders in Energy’s Four Gen Awards for His Work with Edison Electric Institute, Lawrence Jones Sits Down with Energy Central

The Edison Electric Institute is a trade association that represents all investor-owned electric companies in the United States. The organization has been operating since 1933, but in the past quarter-century it has expanded its membership to include electric companies all over the world. Lawrence E. Jones, Ph. D., is Vice President of International Programs and is today one of the major driving forces behind EEI’s global aspirations to increase access to reliable, affordable, and clean electricity worldwide. He has just received a Four Gen award for his lifetime of work in the industry – recognition of his consistent work as a forward thinker, and “way-shower” as the awards proclaim.

Born in Liberia, he went to Sweden as a young man, receiving an education and later working there for  ABB, before moving to the U.S. to join ALSTOM  and later EEI. He has over thirty years under his belt working in different aspects of the industry. Lawrence is particularly concerned about issues around climate change, the energy transition, and universal access to electricity across the world.

Energy Central talked to Lawrence about his most recent projects and his Gen X Four Gen Award from Leaders in Energy: 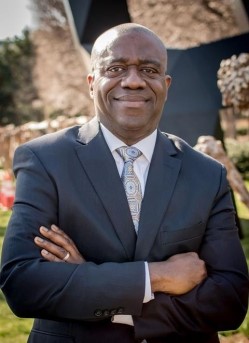 Energy Central: Tell us a little about what you do.

Lawrence Jones: I run the International Program. We now have over 65 non-U.S. electric companies as members with operations in about 90 countries. We work with electric companies, large and small, from all over the world–Africa, Asia-Pacific, the Caribbean, Europe, North and South America, and the Middle East. Some jokingly refer to us as the “United Nations of Utilities” because we have many of the major electric companies in the world participating in EEI. We provide strategic business information through analysis and thought leadership. We advocate for public policy that promotes greater electrification and benefits customers. Through its many platforms, EEI convenes industry and global leaders to discuss and network with their peers on critical issues and trends shaping the industry

Major issues we deal with include decarbonization, the clean energy transition, ESG, infrastructure investment, resilience, supply chain issues, innovation, and cybersecurity, for example. These are common to all kinds of utilities across the globe.

EC: Are there any differences in issues that affect utilities, depending on where they are in the world and what the development status of their country is?

LJ: We do recognize that every country will have its own political, socio-economic and geographical realities. A few years ago, a colleague and I came up with slogan which I believe accurately describes this: The energy transition is global in scope, but local in character. I use that a lot, because that is indeed the essence of our work. Everywhere we go, we recognize that every country has its own political and regulatory systems, so adaptability has to be very important in terms of sharing so-called best practices about public policy, regulation, business models, etc. That is what I find so fascinating about the work we do. Take a single issue and view it through over 65 different lenses. It’s very refreshing that you can have that degree of diversification in your thought process, but it can also be challenging. How do you deliver value to 65 companies that all have different perspectives around the same high-level goals?

EC: How do you view the ongoing Climate Crisis?

LJ: It’s on everyone’s mind and it’s starting to having material effects on many different electric companies in different parts of the world. For example, today everyone is vulnerable to some kind of extreme weather–wildfires, storms, flooding, or heat waves. Clearly climate change is affecting the resilience of energy systems around the world. It is not isolated any longer and the risks are real – it is not a smart strategy for anyone, anywhere, to say it wouldn’t happen to my system. I would argue that almost every electric company in the world has to now put resilience at the core of what it is doing. Increasingly, policymakers, regulators, and investors around the world are focusing on this issue.

EC: Are there other big issues you are concerned about?

LJ: We are in midst of the energy transition which must be beneficial for the whole society, and the other issue that comes in line with that is of affordability for customers. The balance that has to be walked is affordability, reliability, and sustainability. Making sure you have reliability plus clean power plus resilience. The requirements of the grid have changed a lot since the original design. The energy transition will require new infrastructure. In this regard, three key words industry leaders are talking about are adaptation, hardening, and resilience of the energy infrastructure.

Also, related to resilience is another issue: cybersecurity. So we need to look at these different elements when we consider the impact of climate change.

Coming from Glasgow [the COP26 Conference], it was abundantly clear that electrification is critical for addressing climate change. The question is, how quickly can you electrify the economy and how do you electrify it? Recent energy crises in Asia-Pacific, Europe and North America have underscored the importance of resource diversity. The resource portfolio of countries will be based on their geography and resource endowment. There is no one-size-fits-all answer.

Lastly, while we acknowledge the urgency of speed and scale, we must also recognize the transition needed to address climate change, is perhaps more complex than previous ones.  For one, there are more people on the planet than ever in human history. There are many stakeholders with myriad objectives. Ensuring that the transition is just is a grand challenge of satisfying the needs and wants of billions of people. It is not impossible, but it will require a shared vision of the consequences of inaction.

EC: Are political and regulatory structures sufficiently adaptable to ensure the energy transition will proceed successfully?

LJ: What I would say is different countries are at different levels of maturity when it comes to understanding the complexity of the energy transition and taking concrete actions. Some countries have done a good job in being forward-thinking in adapting their regulatory systems to deal with some of the challenges while others are hindered because of politics. The challenge which I’m hearing today – when I talk to electric company executives around the world –  is there needs to be consistency and coherency on the part of public policy so that the investments that are needed can be brought to bear. But as you’re seeing in some countries and regions, policy divergence or policy confusion is one of the things that makes this energy transition very difficult.

So we want to transition the energy system to clean energy, but no one wants to think about the physics and engineering principles for operating the energy grid. There are scenarios where moving too fast can seriously impact reliability and affordability for customers.  So we need to be holistic in our thinking, but also plan long term, and move fast, but also smart.

EC: How do you think the developing world should move forward?

LJ: In Africa and the rest of the developing world, we need more pragmatic, realistic approaches to electrification. We need hybrid solutions that involve both grid and off-grid, but to really scale electrification, more grid than off-grid, is needed. The debate seems to emphasize off-grid solutions, but I think we need to really think about that. Urbanization is a big issue and with greater urbanization across Africa, and the need to promote greater trade on the continent, large integrated systems will be needed to fuel industrialization and continental-wide transportation. Similar need for both grid and off-grid solutions will be important to other developing regions.

EC: That leads onto why you got the prize and what you feel about that honor?

LJ: So the prize was definitely a surprise. It was an honor, and besides, to have the recognition from your peers for what you have done is humbling. I said in my remarks at the award ceremony that getting an award is a reflection on what you have done, but it’s also laying the foundation for what you might do in future. In the Bible it says to whom much is given much is expected. So for me receiving the award came with a greater sense of responsibility: what are you going to do going forward?

What I intend to do is to engage with electric company executives, investors, policymakers, and political leaders technology providers, as well as customers around the world, emphasizing a need for new thinking around a challenge that I think is so critical for the world. That is, electrification for a world where you will have nine billion people.

EC: You are working on two books, one about the benefits of better analytics and data, called Sensing Africa, and the second about your life’s journey. Tell us about the last one.

LJ: The more I travel, the more I realize that we are really indeed one human species. I say to people that I’m part-Liberian, part-Swedish, part-American,  because each country has had an impact on my life. My life’s journey reflects being one man, feeling perfect at home in, and part of, three countries – each country that has molded me.  It is fascinating to discover the similarities and differences. I think we should all think of ourselves as individuals with multiple linkages across the globe. Perhaps, this realization could help us work toward a just energy transition and a sustainable planet.

Editor’s note: this article was originally published on Energy Central

Orlando’s Sustainability & Resilience Director, Chris Castro, Discusses with Energy Central His 2021 Four Gen Award from Leaders in EnergyGreen Jobs Are Not Just for the Young

Lifetime Achievement Award Honoree, Dr. Edward Saltzberg, Reflects on His Recognition from Leaders in Energy and His Time at the Security and Sustainability Forum