When Chris Castro, 32, was brought on to help the city of Orlando become a sustainable, green, climate resilient city eight years ago, some might have considered it an unenviable job. Orlando, probably the U.S.’s tourism hotspot of the southeast, sat far from the table of climate-minded cities. With a powerful tourism industry and a state government infamous for its climate change deniers, getting Orlando to place considered “climate resilient” appeared similar to submitting Everest.

However, as Castro says, the stakes were too high to do nothing. Florida is one of the most vulnerable states when talking about the potential perils of climate disaster: sea level rise, more extreme weather events like hurricanes. Castro, initially brought on to advise longtime mayor Buddy Dyer, now sits as the Director of the Office of Sustainability and Resilience, an office he grew from a shop of 1 to a shop of 12. Similarly, Orlando, once not in the conversation, was recently ranked among the top 25 cities in the country in the American Council for an Energy Efficient Economy city scorecard and has been called the greenest city in the southeast.

Castro was recently named one of four recipients of the Leaders in Energy Four Gen award for his work in Orlando. He sat down with Energy Central to talk about how he did it and what lays ahead. 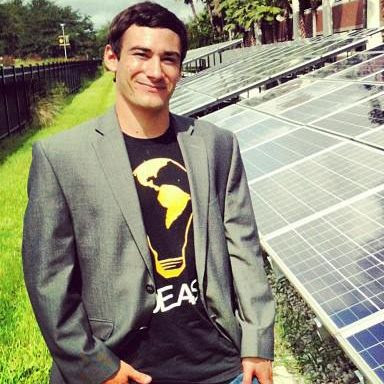 Energy Central: So with your work on the in the public sector and with the city, can you touch on some of your accomplishments that you’ve accomplished with the city of Orlando as the in your current role as a sustainability and resilience director?

Chris Castro: Orlando was not even on the map for cities that were serious about taking climate action and showing measurable progress. So our charge has really been to evolve Orlando into this future ready city at the forefront of innovation and sustainability. So we’ve had to move forward some bold policies: establishing 100% renewable energy commitment for city operations and a citywide commitment to a zero-carbon economy by 2050 or sooner. We’ve committed with our local municipal utility to end coal-fired generation by 2027 at the latest—about 30 years earlier than originally planned. We’ve passed mandatory building benchmarking energy audits and transparency policies for both public and private buildings. We’ve committed to transitioning 100% of vehicles in our city and transit agency fleet to Evs, and we’ve just passed an EV readiness code for all new construction.

EC: Orlando was not even on the map of green cities five years ago, and certainly Florida is not the first state that comes to mind when thinking about climate resilience, though, maybe one of the first states when it comes to vulnerability to climate disaster. How have you managed to put progressive climate policies in place without drawing the ire or backlash of the state government?

CC: There is a deliberate attempt at the state legislature to claw back home rule and local control. There is no doubt we feel the state legislature can be very impactful in our ability to advance decarbonization policies. However, we are fortunate here in Orlando to own our municipal utility and luckily a lot of laws don’t impact our utility’s operation the way they do investor or privately-owned utilities.

One of the best ways we’ve been able to make progress is through the regional resilience collaborative we’ve built. We started thinking about ways the surrounding cities and counties have not taken steps to decarbonize their counties and cities. We thought we should offer support through a peer network of local governments so we created this collaborative which is now made up of over 40 local governments, many that had previously never thought about sustainability. Now we’re working together to do things like publish our first regional greenhouse gas emissions inventory. Every local government in Central Florida now knows their carbon footprint and where they should start to focus their priorities.

EC: Do you find that Orlando is uniquely situated to be a climate resilience  and sustainability leader? Or do you think these initiatives can be retrofitted for big cities across the U.S.?

CC: Every jurisdiction, small, medium, large has a role in advancing a zero-carbon future for humanity. I do think Orlando is particularly well-suited for this work. A major piece is that we own our local electric utility. We have a progressive mayor and a city council that is very forward thinking and we also have community partners in our utility, transit agency, academic institutions and even county government that see the value in moving in this direction. So in one sense, Orlando is unique, but in another sense, we are challenged because  we’re in a state that has literally put its head in the sand as it relates to climate and  we’re still moving it forward. I do think no matter where your jurisdiction is or how big you are, you play a role and we need you to move this forward.

CC: The utility industry is one of the fastest changing industries I can think of, and all utilities are thinking about how to pivot to decarbonization, whether they’ve publicly said it or not. The utility has been incorporating climate risk in its integrated resource plan and we had to hire an outside contractor to perform a distributed energy study that was essentially a rooftop solar assessment of the entire city to see how much distributed energy we could actually produce. They hosted a series of stakeholder workshops and community engagement meetings and, ultimately, what came out of that was the most aligned thing I had seen any utility doing. They committed to net-zero with intermediate, science-based targets: 50% by 2030, 75% by 2040 and so on; ending coal, which I’m still shocked about, and then committing to ramping up nothing but clean energy moving forward.

We are going to transition to natural gas for the next 10 years and then we are going  to retire that plant by 2035 and then nothing beyond that will be fossil fuel.

Now, how do we get them engaged? Cities need to do a better job of reaching out to utilities and engaging them. We need to empathize with their challenges, they’re facing the transition of a 200-year industry in less than 30 years. There’s a lot they have to deal with, and I think that perspective has really helped change the mindset.

EC: Any advice for like-minded individuals trying to make a change in their own community?

CC: I have five key things:

Lifetime Achievement Award Honoree, Dr. Edward Saltzberg, Reflects on His Recognition from Leaders in Energy and His Time at the Security and Sustainability Forum