You are here: Home / alternative energy / Leading Through Adversity: Insights from a Clean Energy & Sustainability Leader 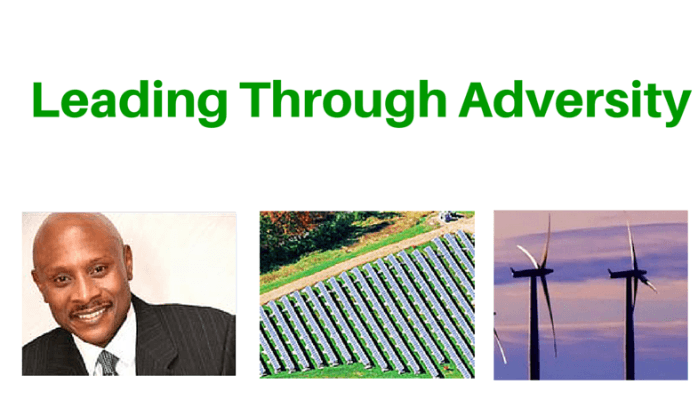 It was a pleasure to recognize Dr. Robert L. Wallace, President, CEO, and Founder of Bithenergy, Inc., as the Baby Boom Generation Awardee at Leaders in Energy’s second annual 4 Gen Event. The 4 Gen event honors four generations of leaders in the clean energy and sustainability field from four generations: World War II (1927-1946), Baby Boomer (1947-1964), Generation X (1965-1980), and Millennials (1981-2000). The theme of the event was “Leading Through Adversity.”

Bithenergy, Inc.
I had the honor of recognizing the Baltimore, MD native’s achievements in the clean energy and sustainability arena through the establishment of Bithenergy, a renewable energy company in Baltimore. It was established in 2009 as a “result of a vision and interest in solar energy Wallace developed as an Engineering and Applied Mechanics student at the University of Pennsylvania,” said Harry Holt, Vice President of Operations, Bithgroup Technologies, Inc., who accepted the award on his behalf.

After graduation, Wallace searched for a job in the solar industry, “but couldn’t get a job with any company doing solar,” said Holt. Instead, Wallace accepted a Field Engineer position with DuPont.

Visioning and networking have always been a hallmark of Wallace’s career. As the fourth of 5 sons, Wallace’s strengths as a kid were in math and science. He leveraged his networking skills at the age of 16 and visited the home of a high school classmate over the weekend. He observed the success of the classmate’s father and asked him why he was so successful. The two words that stuck with him were “engineer” and “entrepreneurship”. At that point, the vision was set. Now, the hard work began— and he “work(ed) backward from the vision,” as Wallace is often known for saying.

After four plus years, Wallace left DuPont to attend Dartmouth College’s Amos Tuck School of Business. During his time there, he conducted research on women and minority-owned business entrepreneurs. He wanted to understand what the keys are for women and minority-owned owners to create wealth, yet give back to the community. Upon graduation, he worked for IBM before deciding to act on the second part of his vision and stepped out on his own as an entrepreneur.

His first company was a mergers and acquisition business in the Michael Milken era of finance that was characterized by widespread securities fraud in the late 1980s. Due to the downturn in the economy, the company ran out of money. Yet, Wallace dusted himself off and pivoted in 1992 to start Bithgroup Technologies, Inc., an IT solutions business named after family members, which continues today.

Later, in the context of the Obama Administration’s policy focus on clean energy, changes in state legislation, local utilities, and industry changes, Wallace conducted extensive research and made another pivot by launching Bithenergy. Starting with an investment of $300,000 and five people, he created the type of clean energy company he envisioned working for when he graduated college. Since that initial investment, Bithenergy has grown to 30 people and generated $7.28 million in revenue in 2014, in less than 10 years. They have over 30 MW of PV systems installed.

This year, Bithenrgy was recognized as the number one fastest growing inner city company by Fortune Magazine’s Initiative for a Competitive Inner City (ICIC). In 2014, they were ranked #49 on the Top 250 Solar Companies by Solar Power World.

Holt acknowledged that Wallace received lots of pushback on pivoting into solar at the time, including questions as to why would he take the risk when he already had a successful business model. Holt said Wallace was undeterred. He believes it is necessary for companies to look continuously ahead to understand the changes in the market, so you are disrupting the market instead of being disrupted.

Bithenergy has contracts with commercial clients, colleges, and universities. They won their first project with a military contract to solar power for a military base. Bithenergy is also pursuing international projects including offshore wind opportunities.

Wallace also shares his hard-won knowledge gained through corporate experience, research on entrepreneurship and experience as a serial entrepreneur by becoming an author. He has written six books and is writing three more books. One of his forthcoming books is titled “Green Gold”, which will explore how companies in the green industry can take advantage of strategic alliances and partnerships. He believes strategic alliances and partnerships are a growth mechanism used by large enterprises that women and minority-owned businesses, as well as green industry businesses, can emulate to grow.

Shira Harrington, Founder and President of Purposeful Hire, was the keynote speaker for the event, presenting on “Understanding the Four Generations”.

Congratulations to Dr. Wallace for being recognized as the Leaders in Energy Baby Boomer Generation Awardee and showing us how to lead through adversity.

Carla A. Fleming is the Principal and Chief Mission Officer for Renewable Marketing, a marketing strategy consulting company. She is also a member of Leaders in Energy and Business Development and Marketing Consultant for High Road Strategies.

Green for Green, Investing in Green TechnologiesLeaders in Energy 2015 Year in Review

Leaders in Energy’s Four Gen Awards: A Look Back Over the Years