You are here: Home / Bioenergy / Event Recap: The Evolving Bioeconomy and Renewable Fuels

The renewable fuels standard, sustainability, algae, and bioenergy job opportunities were key topics during the Leaders in Energy (LERCPA) event, The Evolving Bioeconomy and Renewable Fuels, on Monday June 22, 2015 at the Walter E. Washington Convention Center. Janine Finnell, Clean Energy Ambassador and Founder of LERCPA, referenced the need for industry to conduct “a big pivot” in the way we do business in both a scarce and more open world (see more information in “The Big Pivot” by Andrew Winston) and how energy professionals will need to consider how bioenergy plays into these changes.

Professionals from a wide net of bioenergy, including transportation professionals, and from a variety of places in the US – not just Washingtonians – gathered to discuss trends in the bioenergy industry:

After welcoming guests, including those attending the U.S. Department of Energy (DOE) Bioenergy 2015: Opportunities in a Changing Energy Landscape conference, Janine Finnell spoke about LERCPA and what to expect throughout the evening: several all-star presentations with a keynote from Valerie Reed.

Janine has personal work experience with Valerie as a colleague and friend. They worked together in the 1990s on a bioenergy strategic plan that is still being used and implemented today. Valerie gave opening remarks and helped to frame the struggles and successes of incorporating bioenergy into the DOE programs, which ultimately were instilled in her strong leadership values.

When she started on the team, biofuels technology barely existed. The Office of Biofuels Program team was undersized, and flew mostly under the radar. The first hurdle she tackled, as a recent biochemistry Ph.D. graduate, was interpreting the biochemical, biofuels, and biomass terminology from the National Laboratories to her chemical engineer colleagues, other professionals in her management stream, and other non-technical federal organizations, specifically funders in Congress. At the time the lack of widespread knowledge was a significant barrier to biofuels adoption.

Moving along a few years, but still early in her career, Valerie was assigned to an interagency team made up of USDA, EPA, and DOE. The Interagency Working Group on Bio-products and Bioenergy, now known as the Biomass Research and Development Board, was tasked with developing an Executive Order that would become the guiding policy document for the bioeconomy, to be signed by President Clinton. This Executive Order continues to shape the policy and practice of the bioeconomy in the U.S. 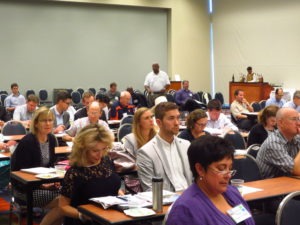 Since then, Valerie has been a key part of the success of the DOE Bioenergy Technologies Office (BETO). Programs and budgets have grown significantly, and as a result new landmarks have been achieved in the industry, especially with the commercialization of cellulosic ethanol – and with more work to do.

Valerie’s support for a closer relationship between USDA and DOE, plus her prior interagency work experience, made her a prime candidate to become the new Senior Advisor of Bioenergy in the Chief Scientists Office at USDA. The barriers of interagency communication will take a career to work through, and she is both fearful and exhilarated to revisit this mission on her journey.

After Valerie’s remarks the supportive partnering organizations – The Clean Energy Research & Education Foundation (CEREF), DC CSR Network, Advanced Biofuels USA, Biogas Researchers, Inc., and the African-American Sustainable Business Committee (AASBC) – briefly spoke on what their mission is and their contributions to advancing the bioeconomy and energy. Jason Force, Founder of Iron Goat, announced that he would be a participant in a special Pitch session for entrepreneurs at the Bioenergy 2015 Conference

Janine introduced Bill Brandon, as the moderator of the panel. She emphasized the importance of making strategic connections via LERCPA, as she had met Bill last year at a LERCPA event when she was researching bioenergy issues in China.

As the moderator, Bill introduced Dan Smolen, Chief Talent Officer for Leaders in Energy. In a Battelle and BIO biotechnology Industry survey, 1.62 million people working across 73,000 individual business establishments are to be found in the bioeconomy – a modest number, says Dan. It is important to realize that the bioeconomy is cross-sector, which includes energy, agriculture, manufacturing and production using “renewable plant and animal resources to produce food, fuel, chemistry and other materials.”

The bioeconomy attracts people from these sectors and is open to a variety of skills and areas of expertise. The Mid-Atlantic region is expected to see growth in these types of jobs. Dan noted local companies working in the bioeconomy and other resources for locating a career – such as the GreenJobBank. In his closing remarks, he reminded participants to continue their education, skills, expertise and training – and provided resources for accreditation.

If you missed Dan’s presentation about finding a job in the bioeconomy, check it out here. We’ve also posted his presentation from our April 16 event on Finding a Bright Green Job in a Dull Gray Economy.

Bill Brandon, moderator of the panel, provided context for “what is the bio in bioeconomy”. He says that traditionally, it included feedstock, microbes for processing and molecules in bio and chemical compounds. However, now in the 21st century bioeconomy, the bioeconomy also includes big data, supercomputing and genome information, which has contributed to a high degree of hybridization of backgrounds. He joked that professionals are even called “bio-engi-maticians” but sternly said “the edge is where the action is.”

Bill called on Kristen Johnson, Sustainability Technology Manager at BETO, where she has been at the intersection of where landscape design principles are applied to bioenergy. Research, development and demonstration of bioenergy (products, power, and fuels) from advanced feedstocks have been challenging, but there have been opportunities through the support of BETO and the National Laboratories. Her programs take a look at developing the entire supply chain for a cross between strategic analysis and sustainable business to promote the economy, society and the environment. The programs help developers with land valuation, their goals, and sustainability with metrics and indicators.

Kristen’s team works on many projects, but she highlighted three that are being developed by National Laboratories with metrics, tools, and field studies:

After a brief introduction from Bill, Scott Sklar brought his experience to the conversation. Scott has been involved in several bioenergy initiatives and has witnessed a change in attitudes and approaches in the industry since the 1970s oil crisis. Bringing in statistics on resources, such as grains and feedstock, and emissions such as nitrogen and carbon, he built an argument that the processes for biomass could be better managed and the industry better educated. The industry is experiencing a “renaissance in materials and bioscience” with improved technologies being rapidly developed. Business models, creativity, interdepartmental activity and approaches need to be prepared for the next big thing.

To add some more context, Bill mentioned that ethanol made its first big landmark in 1939 with a New Jersey Supreme Court examination of anti-trust in oil. Due to the unfolding global situation at the time, market dynamics changed, and the opportunity was lost to see a surge in ethanol use.

Bill introduced Erick Lutt to talk about the Biotechnology Industry Organization (BIO). Erick mentioned that about 75% of his members are in the medical and pharmaceutical industry, but that they see themselves as a technology and innovation organization. The organization is seeing job growth in bioenergy, many of them permanent.

Erick used case studies to support his claim that algae is a resource that can significantly reduce greenhouse gases, including in Iowa where algae is co-located with corn. Then Erick brought up the Renewable Fuels Standard, a controversial topic that spurred many of the audience questions. Renewable fuels are seeing huge investments – in the millions and billions of dollars. There is hope that the Environmental Protection Agency can put renewable fuels back on track.

Bill had heavy-hitting closing comments on algae’s utilization and potential. Algae appears to be a key ingredient to the future of biomass. Commodity markets, production, portfolios, waste-water treatment, animal waste, investment, fracking and natural gas, the automotive business – and many, many more industries can and will be affected by the move toward a bioeconomy.

LERCPA Director of Marketing, Carla Fleming, brought the event to a close with prize drawings for the completion of surveys. These surveys will help LERCPA learn more about how it can extend its offerings and provide excellent events, content, and services throughout the year to provide the greatest value to its members. The prizes included two books authored by Dan Smolen, Tailoring the Green Suit: Empowering Yourself for an Executive Career in the New Green Economy, and one Chipotle gift card.

The audience engaged in a great conversation about the bioeconomy with a lot of different perspectives and angles on the bioeconomy. Following Valerie’s interdepartmental spirit, the audience networked with each other across sectors and disciplines after the panel had concluded.

Did you attend the Bioeconomy event? If you did, and you haven’t already filled out our 2-5 minute survey on your thoughts and opinions about how Leaders in Energy is doing and can maybe help you achieve your goals, please feel free to do so now.

Kerry Worthington began volunteering for Leaders in Energy in spring 2015. She is a young professional working in the state regulatory space, specifically on multi-state issues. Transmission system planning and analysis from a policy point of view has been her focus area for several years, and she is growing into the distributed generation area with an eye on environmental topics.

Photo credits: Vaishali Kushan served as the photographer for the event. Over the past ten years, she has worked in various areas of the international development field with a focus on urban development. She recently finished a report for ISO that investigated role of standardization and R&D in the green building sector – to reduce gas emissions. This multi-dimensional work history enables her to seek game changing solutions to develop integrated strategies, develop programs with measurable results and solicit project-based funding from various donors.

Ethanol and Butanol: Symbiotic Partners for a Modern FuelUp with Octane and Down with Aromatics: Continuing Health Risks with Petroleum Fuels and the Need for Engine Efficiency