You are here: Home / automotive fuels / Ethanol and Butanol: Symbiotic Partners for a Modern Fuel

The debate touting butanol over ethanol as a ‘better’ fuel component has gone on for quite some time in biofuel circles. Those who support butanol point to three key factors:

However, it does has its disadvantages in relation to ethanol, including:

However, we purport that both butanol and ethanol can be blended together to provide a better fuel component.

From the initial development of automotive fuels, there have been two fundamental driving factors – octane and cost. Charles Kettering – through the work he did with Dayton Engineering Laboratory Company (DELCO) – established the basic facts regarding automotive fuels a century ago, which still matter today. His counterpart, Thomas Midgley, discovered the potential for a lead additive to increase octane while working with Kettering.  However, Kettering favored ethanol and suggested blending at 30% with gasoline. Furthermore, he suggested adding butanol to mitigate phase separation.  He also knew that adding aromatics could increase octane.

Fuel manufacturers in the United States, inspired by the work of Kettering and Midgley, have tried both adding lead and aromatics.  However, both have serious health effect issues – mainly that lead is a heavy metal and aromatics create dangerous PAH particles.  Today, auto manufacturers, Oak Ridge National Lab and other researchers say that a modern, 100 Research Octane Number (RON) octane fuel is needed.  The added latent heat of evaporation of ethanol is also a valuable characteristic by cooling the fuel charge and flattening the torque curve.  Oak Ridge pushes the term “renewable super premium” while others prefer the term “high performance regular,” implying it should be the future standard fuel.

Some in the biofuel industry have suggested that ethanol has a high RVP. In truth, neat ethanol has a very low RVP of 2.32 psi compared to gasoline’s 7.8 – 15 psi RVP range.  The RVP of neat butanol is even lower at a range of 0.48-0.77 psi, which is low enough to affect cold starts and drivability.  Ethanol, when blended with hydrocarbons, raises the RVP of the hydrocarbon component due to the phobic nature of gasoline to ethanol.  A certain RVP level is required – 5.5 is the target specification, as it is at the lower limit as defined by ASTM Method D5798 – to avoid cold-start problems, but it is also desired to restrict RVP at the upper end to avoid air pollution from volatile organic compounds (VOCs), which would require a 7.8 RVP or less.  Furthermore, seasonal temperature change must be taken into account when determining these RVP levels.

N-Butanol with a RON of 93 cannot provide a 100 RON fuel without adding aromatics or ethanol.  Iso-butanol is better with a blending RON of 111; however sufficient RVP needs to be accounted for.  Ethanol can easily contribute to a 100 RON fuel with its 123 RON rating, but controlling RVP is an issue.  E10 presently has a 1-psi waiver for maximum RVP and still requires removing some of the lighter, less expensive hydrocarbons.  Adding more ethanol than 10% actually assists in lowering the RVP as the effect of larger amounts of low RVP ethanol begins to counter the elevated RVP nature of a declining amount of hydrocarbons, as shown in Figure 1 below. The horizontal dashed line at 60 kPa (8.7 psi) represents the RVP of gasoline or a blend stock (BOB).  The resulting RVP of different alcohol blends are shown in the curved lines. 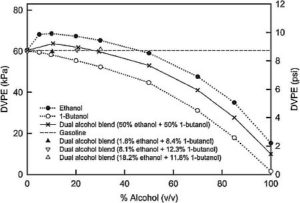 Here is where ethanol and butanol can be symbiotic. When butanol is added to an ethanol/gasoline blend, it provides a significant negative effect on the RVP.  From Figure 1 the maximum ethanol blend to maintain a 5.5 RVP is about 85%, whereas the maximum butanol blend is about 60%.  A combined alcohol blend of about 18% ethanol and 12% butanol can maintain the original BOB RVP but would lack optimal latent heat of evaporation.  A tri-blend of ethanol, butanol and higher amounts of lighter hydrocarbons makes an ideal fuel blend and is an improvement over single blends of ethanol/gasoline or butanol/gasoline.  This blend could use “natural gasoline” from gas wells, butane and other less expensive hydrocarbons while still maintaining the 9 psi RVP maximum standard set by the EPA.

Referring to Figure 2, adding 5% butanol to an ethanol blend will reduce the total RVP by about 0.8 psi.  Adding 10% butanol to straight gasoline will reduce RVP at the same factor.  A BOB or ‘blend stock’ containing 5-8% or more butanol could theoretically be manufactured and certified by the petroleum refiners and distributed by pipeline.  This stock would give refiners some flexibility in blending a BBOB (Butanol blend BOB) while maintaining RVP standards.  If this BOB octane were 88 RON (2010 standard) it could be sold for small engines where they have no fuel control (i.e. powered only a throttle controlling intake air).  With just two tanks – a BOB tank and an ethanol tank – a variety of fuel octane and ethanol blends could be dispensed at the same fueling station.  This would require EPA to certify the BOB but not the final fuel, as that would be a specification that can be predicted and set.

From a short-term perspective, blending an E15eq fuel that is approximately 83% gasoline BOB, 6% butanol and 11% ethanol would overcome the winter blend RVP issue without a waiver.  This would also produce 25% more RINs than regular E15.  Without the cooperation of the EPA and petroleum refiners, butanol gives a way to wiggle through some restrictions to keep advancing the Renewable Fuels Standards (RFS). However, it is not a silver bullet for future high performance fuels, just a necessary collaborator. More technical information can be found at Advanced Motor Fuels.

– Reprinted with Permission from BiofuelsDigest.com