Young Leaders Share Their Ideas for a Better World

I’d like to follow up on my previous report from the Youth Time Global Forum held in Paris, which I attended as a journalist representing Leaders in Energy. The 2018 Forum’s theme was Worldwide Impact Investing: The Role of Entrepreneurs. This emerging form of ‘impact investment’ has the potential to combine best of nonprofit and for-profit systems, for positive social and environmental impact along with sustainable financial returns. Youth Time believes this “win-win formula” is crucial for “addressing global problems and reaching sustainable development goals.” To this end, the Forum provided the opportunity for 15 young social entrepreneurs and non-profit leaders to share their idea for an organization or product to engender social and environmental good.

Puerto Rico in the Wake of Hurricane Maria

One of this year’s young winners, 22-year-old Jose Molinelli Gonzalez from Puerto Rico, presented his project, the Urban Hanging Gardens Initiative.  Jose, a former political advisor and co-owner at La Francaise Corporation, began by providing some context to his project. In 2017, Category 5 Hurricane Maria wiped out 80 percent of the crop value in Puerto Rico, according to Carlos Flores Ortega, Puerto Rico’s secretary of Agriculture. The Hurricane destroyed most of the agricultural infrastructure and crop lands on Puerto Rico, causing a loss of over $780 million in agriculture yields. Banana, plantain, and coffee crops were the most significantly damaged, and the Island’s import dependency went from 80% to nearly 98%, in the wake of Maria. One year later, Jose explained, import dependency is still at 92%. Flooding and storm surge covered a coastal area of over 50,000 acres, and caused a catastrophic damage to both irrigation systems and hydroponic facilities. 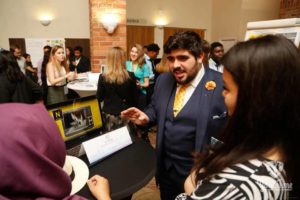 Jose explained that after 2012 the Island saw a surge of young entrepreneurs developing agricultural projects and investing in croplands to expand their farming operations. In addition, due to the rising demand for organically-grown produce, many farmers began to scale up organic operations.

Unfortunately, in the aftermath of Hurricane Maria, many crops and a majority of Puerto Rico’s agricultural land were decimated, forcing both “emerging and experienced farmers to re-invest in soil sustainability and capacity” thus increasing costs for transportation of product to the Island’s capital, San Juan.

Further exacerbating the issues the Island is currently facing after Maria’s destruction is the level of urban decay in the capital city. San Juan, Jose explained, is facing issues due to its many “abandoned structures, as these incentivize criminality and pose sanitary issues.” In 2010, the Municipality of San Juan developed a plan to subsidize the initial startup rental costs of businesses to enable renovation of the abandoned structures as a base for their business operations.

Jose believes that using new technologies such as “condominial indoor hydroponics,” or vertical  hydroponic (and even aeroponic) growing systems designed to maximize space for indoor growing on a large scale, could “greatly mitigate soil maintenance and irrigation costs for farmers.” For example, indoor hanging hydroponic systems could be could be set up with drain and a small cage in order to avoid any obstacles in the cultivation process, and would provide the perfect solution to maximize urban gardening and agricultural space. Furthermore, utilizing abandoned buildings for indoor hanging hydroponic systems in the San Juan Area would be a win-win, an “inexpensive way to mitigate urban decay and facilitate a low cost way to grow crops.” In addition, local farmers grow crops closer to their customers in the San Juan urban area, thus reducing both costs of transportation and environmental issues and emissions related to transporting produce longer distances.

When asked what his underlying motivation for starting the project was, Jose explained that he felt compelled to rectify an issue impacting “many people close to me, both through the bad effects of urban decay and the external food dependency…expanded by Hurricane Maria.” Therefore, by developing a synergistic project, he could both work to fix up the decaying urban spaces he loved as a child, and help the farmers he admires to regain success in the wake of Maria’s destruction. In this manner, the Urban Gardens Hanging Initiative can help renovate abandoned public buildings San Juan by development of urban green spaces and hydroponic agriculture, which in turn can be rented to farmers as production spaces at a reduced cost. Therefore, the initiative tackles urban decay, and at the same time allows farmers impacted or displaced by last year’s Hurricane to regain their livelihood and new farmers without substantial capital to develop their businesses.

During the Youth Global Forum Closing Ceremony, Jose was awarded a grant for investment opportunities, which he plans to use for the purchase of hydroponic agricultural system components, and hopes to raise additional funds for future projects. 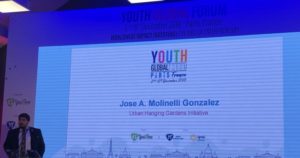 For more on Hurricane Maria and infrastructure in Puerto Rico, see Miriam’s previous article on the Leaders in Energy blog, available here: https://leadersinenergy.org/microgrids-distributed-energy-resilience/

Why Going Green Is Smart For Your BusinessImpact Investing, Climate Change, and the SDG’s