This week, I had the honor of attending the 12th edition of the Ciudad de las Ideas—“City of Ideas”—an International Festival of Brilliant Minds held each year in Puebla, Mexico. Conference speakers adopt the format of short, 20-minute segments to present their exciting and important research and ideas before an audience of 5,000. This year’s festival, organized around the theme of “Epic Ideas,” was held November 8-10.

To me, from an environmental standpoint, we are faced with climate and environmental problems of epic proportions, which require epic solutions.  Included in the conference is ‘WUnder 18’—young entrepreneurs, problem solvers, budding scientists, and creative thinkers who have developed unique solutions for positive change. Their presentations ranged from an allergy-detection device housed in a wrist watch to a classical pianist using  music to inspire positive change.

One of these exciting young presenters was 16-year-old Maanasa Mendu. And importantly, often the best—and most sustainable solutions–to the most difficult problems, are provided by nature itself, as Mendu demonstrated with the energy-providing device she developed. 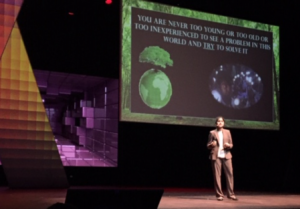 Maanasa discussed her work as part of the segment called “Epic Future,” providing encouragement to those attending La Ciudad to believe in their ideas and know that they can succeed. She told the audience that “You are never too young or too old or too inexperienced to see a problem in this world and try to solve it.” Her talk ended with what she called her takeaways: “1) Don’t be afraid of failure; 2) Inspiration comes in all forms; 3) Collaboration is key.”

Mendu says that she discovered during visits to her grandmother’s village in India that “they don’t have proper access to electricity and lighting.“ This first-hand experience of a need inspired her to look for a cost-effective and easily implementable solution.

Maanasa responded at just age 13 by designing “Harvest,” a nature-inspired energy device that harvests wind, sunlight, and precipitation using the piezoelectric and photovoltaic effects to integrate renewable energy into urban and rural landscapes and provide power to developing countries. Importantly, this device is not only bio-inspired, but also affordable, available at a price point of around $5. Referring to her search for a renewable solution, Maanasa said: “As we know with the whole energy crisis and global warming going on, it’s really important to find a sustainable source of energy that can be easily acquired and used for all of us,” Maanasa said.

Her project was developed as part of the annual Discovery Education 3M Young Scientist Challenge. The submission of “Harvest” resulted in her being named “America’s Top Young Scientist 2016.” In 2017, Forbes recognized her work by naming her to their list of “30 Under 30 – Energy.” Maanasa has spoken about her work at TEDxVienna and received honors from the Ohio EPA and House of Representatives.

In collaboration with plant pathologists and farmers, Maanasa also has developed “LeafAI,” a practical, fast machine learning tool that identifies common plant diseases that received honors from the “Google Science Fair and Junior Science and Humanities Symposium.” The AI app she developed is able to identify 38 classes of biotic plant pathology by using a photo on a smartphone. Her app received 2nd place in Microsoft’s 2019 “AI for Good Idea Challenge,” which challenged “developers, students, and data scientists to use AI to build a more sustainable and accessible world.”

In order to further support STEM education and sustainable development, Maanasa has also helped found the Maruthi Foundation, which has funded 16 scholarships, conducted STEM workshops, and installed clean drinking water systems. Currently, she is working on enhancing “HARVEST” and “LeafAI” and spreading awareness of the importance of STEM education and the global energy crisis.

From a recent interview with Girls & Co, Maanasa gave some advice to other budding scientists:

“My biggest piece of advice is to try stuff, and ultimately believe in yourself! Even though an idea may seem crazy, you may never know whether it may change a person’s life. Remember to take risks! If you have an idea or a problem to solve, don’t hesitate to sketch out a model or build a prototype just using common household materials. When people don’t believe in you or even when you don’t believe in yourself, you must be brave and go for it. You’ll be surprised at what you can accomplish when you put your fears aside. Everyone has the potential to change the world for the better and the hard part is they just have to harness it!”

Opportunities to Join MEIA’s Cohort 1 Startup TeamsFracking Q&A: The background, the ban and what’s coming next