La Ciudad de las Ideas (City of Ideas), co-founded by Dr. Andres Roemer and Ricardo Salinas Pliego, is a three-day celebration of innovative thinking held each year in Puebla, Mexico. The festival just wrapped up its 13th annual event in on December 4-6. 2020, in front of a socially-distanced audience with talks and performances also live-streamed. This year’s theme, Reboot, included wide-ranging discussions on how to solve problems by changing direction and thinking in new and unexpected ways.

A highlight was a talk by Enrique Lomnitz, honored recently as one of National Geographic’s Changemakers for 2020, discussing his approach to sustainable water access and his program that has installed 20,000 rain harvesting devices in Mexico since 2009.

The UN projects a worsening global water crisis with a projected deficit of 40% by 2030. According to Isla Urbana and official data, an estimated 10 million Mexicans lack access to water.  250,000 in Mexico City are not connected to the potable water network while approximately 35% of homes suffer from periodic water shortage. Moreover, according to a study carried out by the World Bank and Conagua, by 2030 access to water will likely worsen for millions of people, and “if current water management practices are maintained, new sources will have to be found for 30% of the demand in the Valley of Mexico.”

Where does Mexico City’s water come from?

70% comes from the Valley of Mexico aquifer – overexploited to more than 200% of its capacity. This depletion is removing hundreds of years of water in just a few years, causing parts of the city to subside. For the rest, 30%, is pumped uphill more than a kilometer and along a network of more than 330 km, from the State of Mexico and Michoacán. Of this 100% that enters the drinking water distribution network, approximately 40% is lost in leaks. At the same time, each year an amount of rainwater equivalent to filling the Azteca Stadium 1,000 times falls on Mexico City, causing floods and puddles and then going directly to the drain.

According to Enrique Lomnitz, the tragic paradox is that Mexico City continues to sink and flood but also is rapidly running out of water . Much of the abundant rainwater is lost as it runs through the city’s drainage system designed for storm control. Mexico City (CDMX) and its metropolitan area, with more than 23 million inhabitants, faces critical strain on water supply for all its inhabitants and has a crucial need for effective and sustainable management of water sources.

“Working with water has enabled me to see the daily struggle people have to get high quality water every day, have homes flooded with sewage water where we have significant rainfall,” Lomnitz said. Moreover, water supply is difficult to attain–many people in Mexico City rely on trucks and sometimes only get water once a week or have to carry water on a donkey. Mexico City is in danger of running out of water with the poorest parts of the city hardest hit.

Enrique Lomnitz has a solution

Enrique Lomnitz proposed a solution to both problems—flooding and lack of access to water for household use—by developing a massive rainwater collection project. He says that there are five benefits to collecting rainwater:

The issue is not just about creating the technical mechanisms for the water collection system. It also has a social benefit. Lomnitz emphasizes that there is an important community aspect, as people learn how to deal with the issue of water and work together to create a solution at the local level. To that end, communication and education form an important part of his rainwater collection model. In order to make the plan viable on a large-scale, it is necessary to influence public policy by mapping block by block the issues of water to identify both locations of severity and socio-economic factors including areas of low income. He claims that mapping is vital to influencing public opinion and therefore acceptance of the model on a large scale. 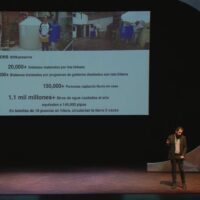 Lomnitz is one of the founders of Isla Urbana, which has the mission of contributing to “a concrete solution to the sustainable supply of water in Mexico,” by developing systems for urban and rural contexts. It is estimated that families can have access to up to 9 months of water each through rainwater harvesting systems.

The system works by capturing water from the roof of a building, directing it through a bypass that separates the first rains of a storm to reduce contaminants. Subsequent rains then go into a cistern, where the water is chlorinated and filtered.

Almost all of the parts of the system are made in Mexico, with local people trained to build and install the device.

Isla Urbana is a multidisciplinary project made up of people from a wide range of different specialties, both social and technical, dedicated to the design and installation of rain catchment systems as an alternative, and sustainable and ‘autonomous’ provisioning of sources of water. The organization seeks to improve the water sustainability of Mexico City, beginning with the families that suffer from the greatest risk to water supply. Isla Urbana also works in rural areas of the country that lack access to the potable water network, particularly in the Huichol mountains, the Mazateca mountains and the Chihuahua mountains.

Guided by the principle of ensuring access to water through “rain for all,” Isla Urbana has developed a hybrid work model: the organization is both a civil association that works in marginalized communities which suffer the most from lack of water; and is also a social enterprise that offers water catchment systems and sustainable water technologies. The organization’s key goal is to enable anyone to “catch the rain regardless of whether or not we suffer from a lack of water, since having sustainable sources of water is a great benefit.”

In the words of Isla Urbana, “let’s catch and take advantage of the rain: sometimes the solution does fall from the sky.”

Dr. Miriam Aczel is Leaders in Energy’s Director of Communications. Miriam is a researcher at Imperial College London’s Centre for Environmental Policy, with a focus on international energy science and policy, with a focus on mitigation of environmental and health impacts of shale gas. She is also co-founder and co-director of the Amir D. Aczel Foundation for Research and Education in Science and Mathematics, a nonprofit based in Cambodia.

Debra Aczel has over 40 years in educational program management, including as program manager at MIT’s Terrascope Program—an interdisciplinary environmental program working to solve pressing global issues. She is co-founder and current co-director of the Amir D. Aczel Foundation for Research and Education in Science and Mathematics, supporting cultural and educational projects in Cambodia.