You are here: Home / climate change / Ende Gelände: ‘When Laws Fail, It Is time for Blockades!’

“If ever there was a state of emergency, climate change would be it.”

On Friday, June 26, 2020, Ende Gelände (a German idiomatic expression meaning “here and no further”) occupied a mine excavator in Jaenschwalde, near the German-Polish border. The Jaenschwalde lignite-fired power plant is owned by LEAG, a Czech-owned company and the fourth largest power plant operator in Germany.

They also occupied a mine excavator and conveyor belts in Garzweiler, in North Rhine-Westphalia, in the west of Germany. The brown coal fuels the nearby power plants Neurath and Niederaussem. They are the two top polluting power plants in Germany.

Ende Gelände consists of people involved with anti-nuclear and anti-coal movements, of tree and forest occupiers in the Hambach Forest, and of larger environmental non-governmental organizations. They use civil disobedience in order to protect the climate.

Last week’s action shows that Ende Gelände has no plans to back down from organizing non-violent direct action protests despite the fact that in late May, the Berlin Office of the German Bundesamt für Verfassungsschutz (BfV, Federal Office for the Protection of the Constitution) decided to classify Ende Gelände as a left extremist group.

Ende Gelände has been organizing non-violent direct action protests against lignite mining and coal-fired power plants since 2015. Lignite mines are located in North Rhine-Westphalia, Brandenburg and Saxony. Lignite (also known as brown coal) is the dirtiest form of coal. The mined coal is transported via rail to nearby power plants.

Germany has 84 coal-fired power plants. In January 2019, Germany announced it would phase out coal by 2038. Last week, on June 24, 2020, Chancellor Merkel approved a $4.9 billion compensation package for utilities that will be affected by this phase-out. Scientists, environmental organizations and activists counter that is not soon enough. To avert climate change, they argue, the plants must be shut down immediately.

In Europe, seven of the top ten polluting power plants measured by CO2 emissions are located in Germany. Of these seven, two are owned by RWE and four by LEAG, hence Ende Gelände‘s actions often focus on these two companies. 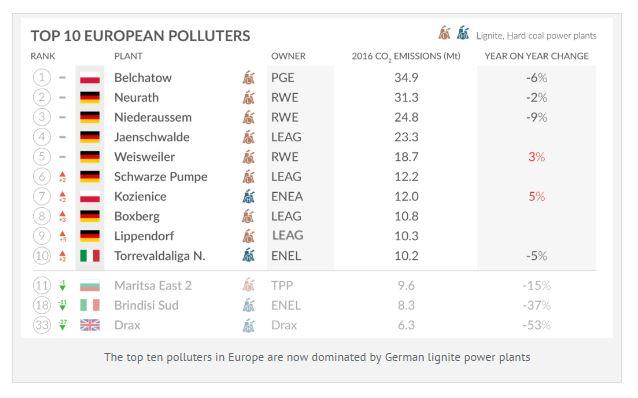 The court mentioned the increase in the number of protests, of participants and of strategies, such as occupying or chaining themselves to the train tracks to prevent the movement of coal, in their statement. Ende Gelände noted that the growth would generally be read as a sign of success but is not because it is a threat. Ende Geländeargues that none of these listed items are anti-constitutional, and in fact, the inverse, that they have the constitutionally guaranteed right to protest.

The court documents furthermore suggest that the Interventionistische Linke (Interventionist Left) are involved, which according to the court “do not openly advocate militancy but do not explicitly reject it.” Interestingly here, neither the use nor the advocacy of militancy or violence is criminal but rather the lacking renouncement is criminalized.

As Sina Reisch, former press spokesperson for Ende Gelände told Common Dreams in an interview, “We do not destroy things. We just sit and occupy space and tracks.”

Furthermore, the court cites the group’s demand for “System change not climate change!” After the Nazi era, the West German constitution included a clause that states one cannot advocate the overthrow of the government. This clause makes sense given the events that led to the Nazi regime. It has, however, been used against leftists, particularly during the Cold War era. The West German constitution mostly forms the basis of the current constitution post-unification.

According to the BfV, left extremist groups can be grouped into two main categories: dogmatic Marxist-Leninists or other revolutionary Marxists, who have the intention of organizing a socialist or communist social order; or anarchists, who believe life can be self-organized without the need for a state. So while the term “left extremism” might suggest a discussion of the use of violence in actions, here it criminalizes the ideological push for a different political (and economic) system. The charges are interesting that they reduce all notions of “systems” to solely the concept of government. Of course, there are many types of systems.

Tadzio Mueller, Climate Justice Expert with Rosa Luxemburg Foundation and active in early Ende Gelände actions, told Common Dreams “we are seen, and feared, as something of a ‘gateway drug’ for a younger generation to fight climate change. That is, ‘one successful blockade, and suddenly you are hooked!’ This classification is a sign that they are struggling.”

According to Sina Reisch “since the 2018 action in Hambach Forest and the 2019 actions coordinated with Fridays for Future, we are really having an effect and delegitimizing fossil fuels.” As to last week’s actions, Reisch said, “they show that COVID 19 has not put the climate crisis on hold.”

Reisch is accused of trespassing onto a coal mine. “One of the reasons the prosecution gave is that it is not okay to put your own political idea above the law, except for in a state of emergency, which is interesting,” Reisch said, “because if ever there was a state of emergency, climate change would be it.”

The charges exhibit what Rebecca Solnit, in her book Hope in the Dark, has referred to as “safe dangers,” where something that is not really threatening (non-violent direct action, in this case against coal mining and coal-fired power plants) has to be demonized in order to protect privilege (profits, in this case of the fossil fuel industry). Solnit states that “safe dangers” deflect from the real systemic issues and inequities, in this case, climate change, and the structures that create them, that is, capitalism. More actions are planned at open pit mines in the Rhineland at the end of September.

Tina Gerhardt is an independent journalist who covers climate change, international negotiations and energy policy. Her work has appeared in Common Dreams, Alternet, Climate Progress, Grist, The Nation, The Progressive and the Washington Monthly.

Jane Fonda on the urgency of climate action: ‘This is it, folks. This is the time’