Given estimates that humans are responsible for around 75% of fires, “this means solutions are in our grasp too.”

While devastating fires rage on across California and the Amazon rainforest following historic heat and blazes in the Arctic earlier this year, a new analysis shows that destructive human activity has led to a troubling increase in global wildfires this year. 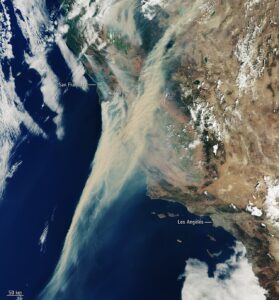 Captured on 19 August 2020, this Copernicus Sentinel-3 image shows the extent of the smoke from fires currently ablaze in California, US. Amid the blistering heatwave, which is in its second week, there are around 40 separate wildfires across the state. Record high temperatures, strong winds and thunderstorms have created the dangerous conditions that have allowed fires to ignite and spread. The fires are so extreme in regions around the San Francisco Bay Area that thousands of people have been ordered to evacuate.

“Governments and businesses need to put together a coordinated global response in line with the importance and urgency of the fires issue, before there is irreversible damage for our planet.”
—Jesper Nielsen, BCG

The report from the World Wide Fund For Nature (WWF) and the Boston Consulting Group (BCG)—entitled Fires, Forests, and the Future: A Crisis Raging Out of Control? (pdf)—warns that “the latest fire seasons have been raging with unprecedented ferocity.”

“The world witnessed the devastating consequences of the fires last year, from billions of wildlife lost and people losing their homes and livelihoods, not to mention the impact on climate. And yet, here we are again,” Fran Price, global leader for forests at WWF, said in statement.

“In April 2020, the number of fire alerts across the globe were up by 13% compared to last year—which was already a record year for fires,” the report says. “Persistent hotter and drier weather due to climate change, and other human factors such as land conversion for agriculture and poor forest management are the main drivers behind the increase.”

As WWF and BCG’s report explains:

Climate change and wildfires mutually reinforce each other, and the fires burning today in many parts of the world are bigger, more intense, and last longer than they used to. If current trends continue, there will be devastating long-term consequences. A greater number of more intense fires will release millions of extra tonnes of carbon, decimate biodiversity, destroy vital ecosystems, impact economies and people, threaten property and livelihoods, and cause severe long-term health problems for millions around the world.

It is estimated that humans are responsible for around 75% of all wildfires, and much of the increase in fire incidents during 2020 can be directly linked to human actions. This means solutions are in our grasp too. There’s no magic bullet that will fix the issue overnight, but there are ways forward if behaviors of the past are changed.

Noting the large portion of fires tied to human activity, BCG managing director and senior partner Jesper Nielsen warned that “the time has never been more critical for climate action.”

“Climate change is largely contributing to this worsening situation,” Nielsen said. “As fires also reinforce global warming, a vicious circle is taking place that needs to be broken. A better focus on prevention and protection measures, especially for forests, is certainly part of the answer. Governments and businesses need to put together a coordinated global response in line with the importance and urgency of the fires issue, before there is irreversible damage for our planet.”

The report specifically calls for governments to increase their national pledges under the Paris accord, improve the accounting process for greenhouse gas emissions from fires that are considered “natural,” reinvest in fire prevention, halt deforestation, carefully reintroduce fire to fire-dependent landscapes, use a science-based approach to forecast risk and prioritize interventions, and “bring business on board” with a focus on companies involved in agriculture, leisure and tourism, energy and utilities, extractive industries, and forestry.

“Proactivity and commitment must be at the heart of a global response to fires and must play out at local, sub-national, national, and regional levels,” said Price. “Preventing fires before they occur is paramount, and far preferable in all respects to suppressing them when they’re burning. Good intentions on paper mean nothing if they’re not followed up with real and effective actions on the ground—and these actions need to focus urgently on forests and addressing climate change.”

Given the role “human negligence” has played in starting fires, particularly in the U.S. and Mediterranean, the report also urges individuals to “take simple precautions not to start accidental blazes,” support civil society organizations focused on fire prevention, make efforts to be “an informed tourist and a sustainable consumer.”

Following the report’s release, climate activists led by Fridays for Future strikers held #SOSAmazonia demonstrations across the globe on Friday to raise awareness about concerns over a pending controversial trade deal between the European Union and the Southern Common Market, a South American trade bloc also called Mercosur.

The E.U.-Mercosur agreement has elicited criticism from environmental and human rights advocates, especially because of the policies of Brazilian President Jair Bolsonaro, whose country is home to the majority of the Amazon rainforest. Earlier this month, after Brazilian government data revealed fire activity in rainforest throughout July rose 28% compared with the same month last year, Greenpeace blasted Bolsonaro’s tactics to battle deforestation as a “PR stunt.”

As Common Dreams reported, Greenpeace Brazil Amazon campaigner Cristiane Mazzetti declared, “Instead of combating criminal behavior and protecting Indigenous forest guardians already hit hard by Covid-19, this government continues to reduce environmental protection and ally itself with those who want to destroy the forest.”

“Join today’s strike for the Amazon,” Greenpeace tweeted Friday. “The rainforest is reaching a dangerous level of deforestation, and the time to act is now!”

Meg Symington, senior director for the Amazon on the Forest Team at WWF-US, called the global uptick in fires “worrying,” particularly pointing to the Amazon.

“The Amazon is not an ecosystem that is adapted to fire, so the fires will have serious short-term and long-term impacts on biodiversity and the conservation of Amazonian species,” she told Our Daily Planet.

“As our global community faces immense health and economic challenges, environmental protections cannot go by the wayside,” Symington said. “We must call for strict enforcement and invest in proactive approaches to end deforestation and curb climate change so we can prevent future disastrous fire seasons.”

Ende Gelände: ‘When Laws Fail, It Is time for Blockades!’“We’re Back”: Greta Thunberg Kicks Off Third Year of Fridays for Future Protests in Germany After Meeting With Merkel

Biden-Harris Victory: A Win for the Planet

‘What the Future Can Look Like’: Study Shows US Switch to 100% Renewables Would Save Hundreds of Billions Each Year

IEA: Renewables on Track to Be Largest Source of Global Electricity in Five Years