You are here: Home / Circular Economy / ‘Zero is the Hero’: International Symposium Educates Students on the Concept of Zero in Math and Minimizes Environmental Impact

By DEBRA ACZEL and MIRIAM ACZEL

The Amir D. Aczel Foundation, in collaboration with the math department of the Royal University of Phnom Penh (RUPP), held a successful international symposium in Phnom Penh, Cambodia, March 19-20, 2019, on the role of the numeral zeroin mathematics. Six hundred first year math students, faculty, and visitors and speakers from Europe, North America and Asia heard talks on zero and how it developed in the East: why is the concept of zero so important in math? How does zero in math relate to zero in philosophy/culture? How do the stories we tell about math and mathematicians change over time? Who invented zero? How do we teach our students about zero? Is the symbol of zero found in Cambodia the world’s oldest? We also wanted to ensure that we reduced our carbon footprint as much as possible—we were striving for a (close to) zero-waste event. Zero, in our event, was to be the hero, both in terms of our event’s focus, and in our approach to environmental impact. The symposium also included talks by Cambodians on “careers using mathematics,” with the goal of informing math students about future options. Currently, most RUPP math students become teachers in schools throughout Cambodia, so finding ways to excite new students to learn math and science is important. The final day also included conversations with Cambodians about what their country needs most in math education. We hope that relationships begun during the symposium will lead to future collaborations and projects. 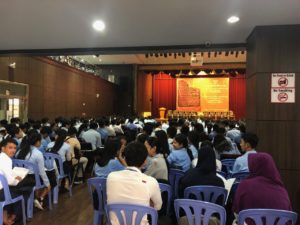 The idea for the conference grew out of the recent rediscovery of one of the oldest—possibly theoldest—representations of zero ever discovered. In 1932, French scholar George Cœdèstranslated and catalogued (K-127) an ancient Khmer inscription. Remarkably, he found that this inscription contained a date with a symbol representing zero. Before this, scholars believed that our numbers hadto have come from the West: Greece or Arabia. The discovery of the zero in Cambodia definitively proved that zero originated in the East, correcting long-held bias in the history of mathematics. This inscription was thought lost during the reign of the Khmer Rouge. Amir Aczel rediscovered this stone, containing a date that includes a small dot to represent zero. His book, Finding Zero: A Mathematician’s Odyssey to Uncover the Origins of Zero, tells the story of his search for this stone. During the period of the Khmer Rouge, the educational infrastructure of Cambodia was destroyed. Now, as Cambodia seeks to develop its economy and grapple with difficult environmental and other problems, the country is developing math and science education both in its large cities and rural communities. The conference organizers hoped to use the story of the Khmer zero K-127 to inspire young Cambodians to pursue education in mathematics.

In addition to challenges related to infrastructure for education, another key issue in Cambodia is environmental degradation, particularly related to plastic pollution. For example, tourism in Cambodia produces 4.6 million water bottles monthly without recycling. In Phnom Penh alone 10 million plastic bags are used are used each day. In planning the conference, we wanted to make the event as close to zero waste as possible. The first step was to avoid plastic bag use. Traditionally, Cambodian foods and markets used banana or lotus leaves to wrap up food. However, beginning in the early 1990s they have been turning to single-use plastic bags rather than the banana leaves and other organic materials, leading to a serious waste-management problem. We were able to source our meals from local campus catering company NISSET Cafe, which used banana leaves to wrap up the deserts and many of the finger foods served in the receptions. Where banana leaves didn’t do the trick, we made sure to rent dishes and cutlery rather than single use plastic utensils. Another relatively easy way to promote conservation and reduce waste was by bringing our own conference bags—printed with our logo—to help prevent unnecessary waste, and that could be used as future shopping bags. Our conference schedule materials were circulated online.

A key barrier to reducing our symposium’s carbon footprint was related to water. Cambodia has a big issue with water quality, with estimates that 4 million Cambodians do not have access to clean water. It was hard to avoid bottled water. Where water purification facilities existed, people could refill their water bottles. In areas with many tourists such as Phnom Penh and Siem Reap there is a push for restaurants and hotels to establish “water refill stations” to reduce reliance on single-use plastic bottles. And of course, hacking open a young coconut for fresh coconut water was always an exciting alternative to water.

During the conference in Cambodia, we learned more about some of the work local organizations and individuals are doing about plastic pollution. For example, Plastic Free Southeast Asia (PFSE) runs workshops to help local businesses and groups develop ideas on how to manage plastic waste. They can also provide consulting to organizations in how to run low-waste, plastic-free conferences. Cambodia has participated in “Plastic Free July” since 2015 and is looking forward again to promoting sustainability by encouraging participants to give up plastics for a month. PFSE has also announced a label to reward businesses that have eliminated single use plastics. 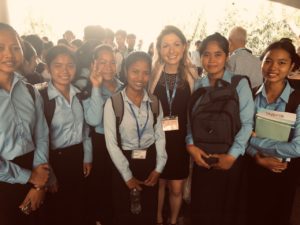 Debra Aczel has over 40 years in educational program management, including as program manager at MIT’s Terrascope Program—an interdisciplinary environmental program working to solve pressing global issues. She is co-founder and current co-director of the Amir D. Aczel Foundation for Research and Education in Science and Mathematics, supporting cultural and educational projects in Cambodia.

Miriam Aczel is a President’s PhD Scholar at the Centre for Environmental Policy, Imperial College London, focusing on international energy and environmental science and policy. Miriam is co-founder and co-director of the Amir D. Aczel Foundation for Research and Education in Science and Mathematics, a 501(C)(3) non-profit supporting education in Cambodia.

She is Director of Communications and blog editor for Leaders in Energy.

Can Dutch Circularity Lessons Be Applied to Northern Virginia?