You are here: Home / Analysis / Why Domestic REC’s Should Take Precedence in Maryland 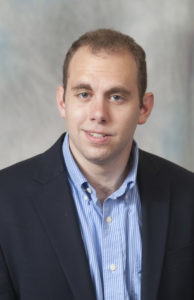 Maryland’s Renewable Energy Portfolio Standard (RPS) serves two purposes: to promote the growth of a renewable energy industry, and to increase the production of renewable energy resources in the state.

RPSs typically require a minimum percentage of the state’s electricity portfolio to be produced from renewable energy. In Figure 1 (below), it appears that the goal of promoting a renewable energy industry has been met. In 2008, Renewable Energy Certificates/Credits (REC) only accounted for about 3,000,000 MWhs of electricity (one REC = one MWh). In 2016, REC production has tripled to nearly 9,000,000 RECs. That is the good news. 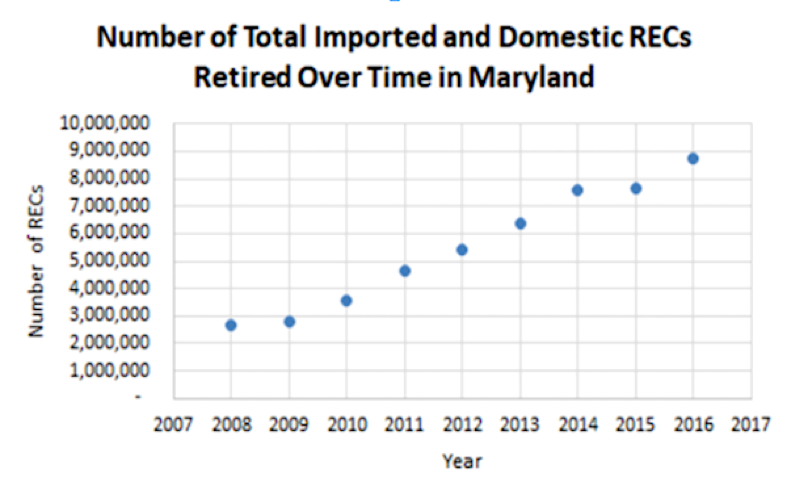 The bad news is shown in Figures 2, 3, and 4, below. Of the RECs used to ensure compliance with the RPS, nearly 80 percent of them were generated from outside of the state and transmitted across state lines; referred to as REC Imports (Figure 2). Figure 3 shows that as the utility companies found that it would be cheaper to purchase RECs from outside of the state, the share of RECs produced within Maryland (referred to as Domestic RECs) has fallen since 2013 from around 23 percent to 15 percent. Figure 4 represents that the share of RECs produced in Maryland and then sold to other states (referred to as REC Exports) has fallen, as neighboring states have decreased their REC purchases from Maryland. 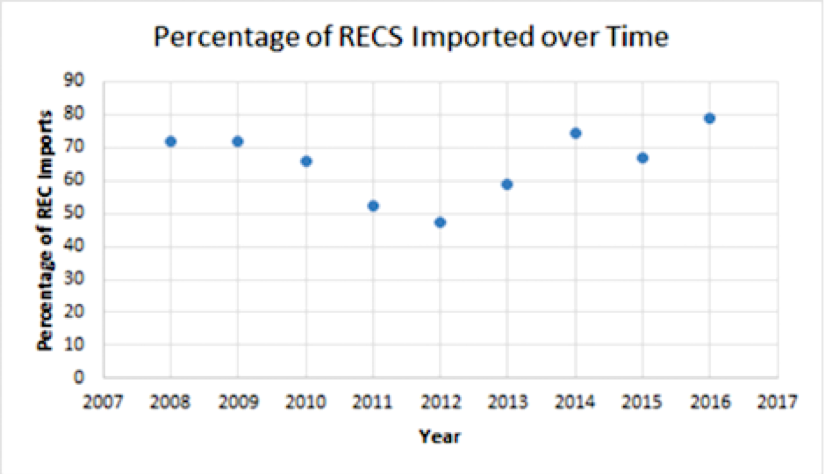 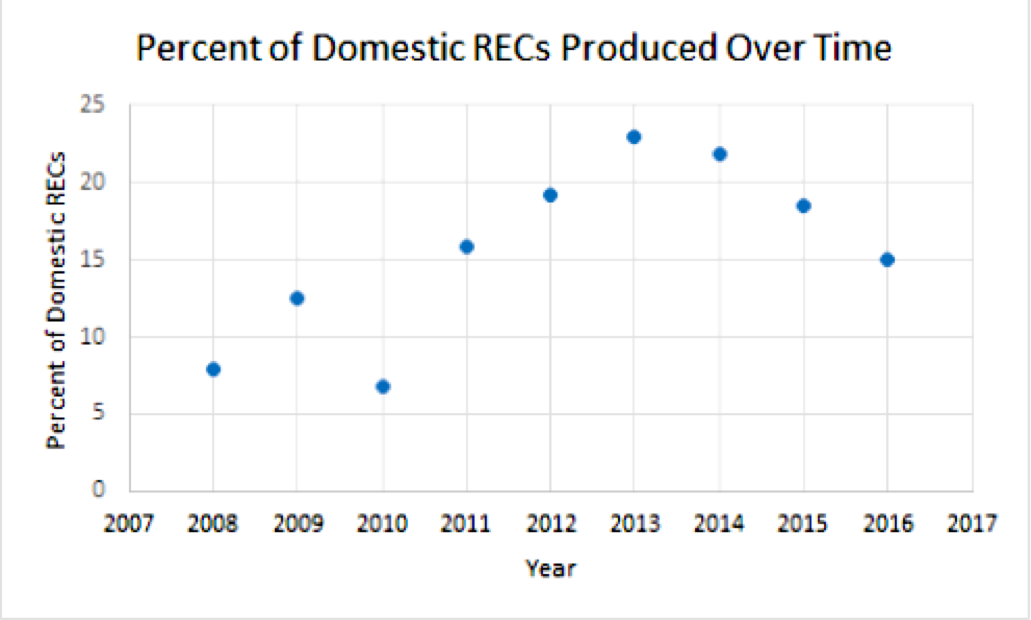 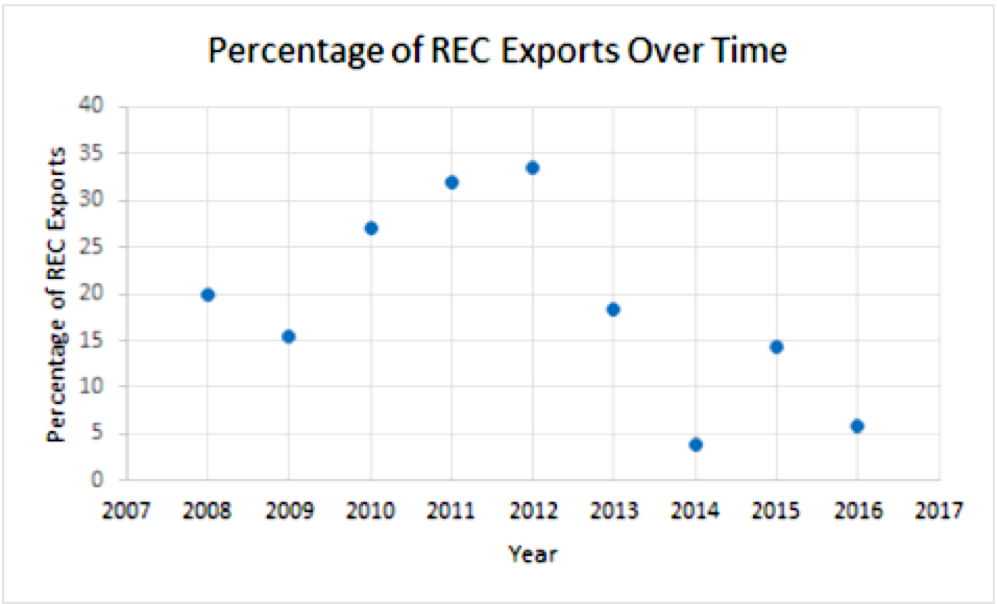 So why does this matter? The Renewable Portfolio Standards are often touted as a policy that has generated both economic benefits and jobs in the state. The data shows that these claims may not hold up. When Maryland’s utilities are buying RECs from renewable energy producers outside of the state, the transactions represent cash outflows. RECs are a mechanism to subsidize renewable energy production, and when the money used to purchase them flow outside of the state, the subsidy impacts the economic growth and job creation of other states, while Maryland ratepayers and utilities share the costs. As a result, it can be argued that Maryland’s RPS is effective at inducing renewable energy generation in surrounding states because Maryland’s RPS requirements are significantly higher in relation to the other states. Figure 5 shows the percentage of energy required from eligible sources over time. In my sample of eight Pennsylvania, Jersey, Maryland Power Pool (PJM) states and California, Maryland’s requirement is the second most ambitious, with a nominal requirement of 25% by 2021. 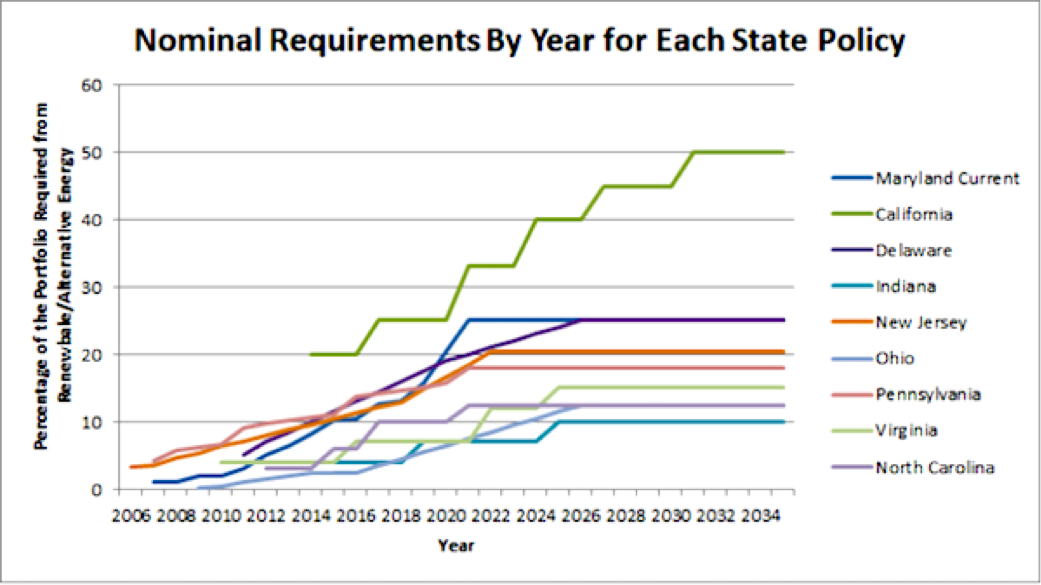 I therefore advocate for an amendment to the RPS policy that would require a minimal percentage of the RECs to be produced in the state. Would that be an efficient policy? Perhaps not. However, answering the question of efficiency in policy depends on how we define efficiency. If it is defined as meeting objectives with the least amount of cost, then this policy would not be efficient. In addition, to define efficiency, we need to define our objectives. I argue that meeting the RPS targets is not the only objective that has to be examined. Because one of the intentions behind the RPS is to increase renewable energy production ​within Maryland​, consideration of the locational attribute of the renewable energy production is an objective that has to be accounted for when defining the efficiency of Maryland’s RPS. Thus, while Maryland’s current RPS is inefficient, a legislative provision limiting REC imports from other states would increase the efficiency of this policy and would be a good step towards increasing renewable energy.

Ryan Block is a second-year Master of Public Policy student at the UMD School of Public Policy, specializing in energy and environmental policy. He is currently researching state renewable energy portfolio standards as a tool for decarbonization, modernizing the energy grid, and expanding renewable energy. Ryan aspires to attend law school to form a career that would combine law and policy analysis in the energy and environmental sectors.