Last month, I attended the Normandy World Peace Forum, Normandie Pour la Paix, as a Young Leader, where I had the honor of participating as the North American representative. The theme of this year’s World Peace Forum was honoring ‘The Peacemakers’, and highlighted those bravely fighting for peace today, continuing the legacy of those who risked their lives for peace 75 years ago at the Allied Landing.

The two-day forum brought together over 5000 people and had several Nobel peace prize speakers, concluding with a signing of the Normandy Peace Manifesto—‘Manifeste Normandie pour la Paix’.

The annual conference is held in beautiful Caen, Normandy, and provides the opportunity for important dialogue about today’s most pressing global problems and an opportunity to work towards peace-building.

Towards Environmental Sustainability and Global Peace

Not surprisingly, the forum had a strong theme of environmental sustainability and a focus on threats to world peace brought about by climate change.  Empowering people—particularly young people—to learn about and engage in open dialogue on often contentious environmental issues is crucial to moving towards a greener, more peaceful future. And while every day we confront alarming news about the impacts of climate change, the important debates and discussions at the Normandy World Peace Forum about how to promote global peace and sustainability left me optimistic and inspired.

Another central theme was education and youth engagement. Last year, the Normandy Region introduced its Peace Education program, which works to recognize and promote actions of freedom and human rights protections. ​​The Prix Liberté–Freedom Award–enables young people around the world to nominate an organization or individual committed to exemplifying the fight for freedom. An international panel of judges chose three finalists from more than a hundred nominations received from across France and around the world. The nominees were Raif Badawi, Lu Guang and Greta Thunberg. Lu Guang, a photojournalist from China, was nominated for taking a stand against industrial pollution from factories. Raif Badawi, a humanitarian activist and author, co-founded the website Free Saudi Liberals in 2008, and remains imprisoned. Badawi has been active for standing up for human rights, particularly women. 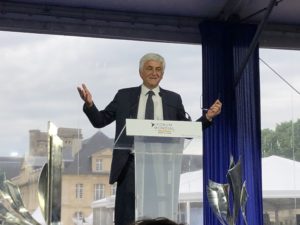 On Tuesday June 4th, during the World Peace Forum “Normandy for Peace”—Normandie Pour la Paix, Hervé Morin, the President of the Normandy Region, announced that Swedish climate activist Greta Thunberg would be receiving the Freedom Award at the end of the month.

The Prix Liberté was nominated and awarded by a panel of young people aged 15 to 25 from around the world.

Thunberg was invited to collect her award during the World Peace Forum in Caen. However, due to school commitments, she was unable to attend the forum, and instead made plans to collect the award later in the summer.

“The climate crisis is not only threatening the living conditions for billions of people. It is indeed threatening our whole civilization as we know it. And it is the ones who are the least responsible who are affected the most.

I have decided to donate all of the €25 000 price money to 4 different organizations dedicated to climate justice:

CARE – who is focusing on helping women and girls in the global south to cope with the effects of rising temperatures and a changing climate.

As well as 350.org and Greenpeace International who both fight for climate justice, the environment and to keep the fossil fuels in the ground.”

Thunberg inspired a global movement for climate action with her strikes from school every Friday in order to raise awareness of risks of climate change. In an interview, she explained:

“I was 7 or 8 when I first heard about climate change. And I saw these pictures of starving polar bears, and extreme weather events and floods and plastic in the ocean…and I became very worried and very depressed… Because most other issues, we can ‘undo’ in the future, but not the climate–there are tipping points—points of no return, and once we pass those points, there is no going back. And I thought I could do something good with my life, instead of being depressed. ”

Thunberg is also forward about being on the autism spectrum, to which she credits her ability to focus on one topic–climate change. In an interview with the New Yorker, Thunberg discussed how she first heard about climate change as a young child, and has been researching it ever since: “I can do the same thing for hours.”

And back in March, Thunberg was nominated for the Nobel peace prize. The young founder of the Youth Strike for Climate movement first began a brave solo protest in Sweden in August which has since inspired students across the world, growing to over 100 countries and involving hundreds of thousands of young students.

Norwegian Member of Parliament Freddy André Øvstegård said of the nomination, “we have proposed Greta Thunberg because if we do nothing to halt climate change it will be the cause of wars, conflict and refugees…Greta Thunberg has launched a mass movement which I see as a major contribution to peace.”

The now 16-year-old activist first gained attention in August 2018 when she protested for nearly a month outside of Sweden’s parliament in response to the Government’s proposal to phase out coal by the year 2038. However, Thunberg argued that the change could be made much sooner, and went on a strike from school to protest the slow action on climate.

In response to her nomination for the Nobel peace prize, the young activist Tweeted that she was “honoured and very grateful for this nomination. Tomorrow we #schoolstrike for our future. And we will continue to do so for as long as it takes.”

The Urgency of Now

Thunberg’s nomination is rooted in the clear connection between world peace and environmental quality, equity, and sustainability. And she is also a symbol of the importance of youth engagement, education, and giving everyone—regardless of age—a seat at the table.

As she said in her speech at Davos in January, “we are facing a disaster of unspoken sufferings for enormous amounts of people. And now is not the time for speaking politely or focusing on what we can or cannot say. Now is the time to speak clearly. Solving the climate crisis is the greatest and most complex challenge that Homo sapiens have ever faced. The main solution, however, is so simple that even a small child can understand it. We have to stop our emissions of greenhouse gases.”

Thunberg also highlighted the collective responsibility—and power—that we all have: “We all have a choice. We can create transformational action that will safeguard the living conditions for future generations. Or we can continue with our business as usual and fail. That is up to you and me.” 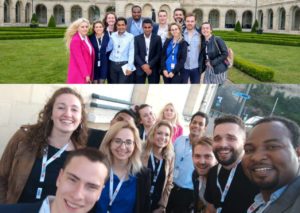 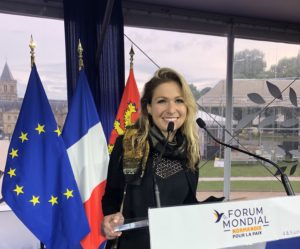 Miriam Aczel is a President’s Scholar PhD Candidate at Imperial College London’s Centre for Environmental Policy. Her research is on international energy science and policy, with a focus on mitigation of environmental and health impacts of shale gas, as well as citizen science and public participation mechanisms. She is also co-founder and co-director of the Amir D. Aczel Foundation for Research and Education in Science and Mathematics, a nonprofit supporting educational programs in Cambodia and beyond.

What do we produce 2.6 million pounds of, every single second?Climate as a Security Issue: A UK Perspective