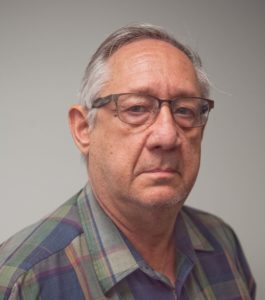 According to the Paris Accords on Climate Change, each country is to develop its own goals for CO2 reductions and develop a program to meet these goals.  Brazil is an interesting case study in this effort.  Unlike other countries, Brazil has chosen to place a strong emphasis on transportation rather than electrical generation and building efficiency.  Brazil has a long history in renewable fuels with a continuous ethanol blending protocol since 1931.

In December of 2017 the Brazilian government passed the RenovaBio program in record time under the leadership of Congressman Evandro Gussi, pictured below.  Since then, the RenovaBio Committee has quickly moved to work out details of the program which is strongly based on California’s Low Carbon Fuel Standard.

In April and May, the proposed protocol was opened to public comment in Brazil.

Delegation to Washington, DC and California

On June 11, a delegation from the Ministry of Mines and Energy, charged with the new program’s implementation, and Brazil’s National Agency of Oil, Natural Gas and Biofuels (ANP) came to the Wilson Center in Washington DC for a public conversation on RenovaBio. The delegation was in Washington and California for meetings with the U.S. government and the private sector to discuss lessons learned from the implementation of the RFS and the LCFS in order to improve the development and implementation of the new policy in Brazil.

I attended the private sector discussions and offer the following observations and comments about the RenovaBio program.  It should be noted that this program covers all types of renewable fuels including bio-methane and renewable diesel. 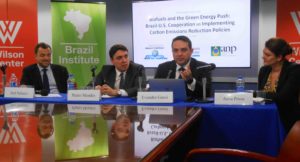 Influence of California Low Carbon Fuel Standard and Carbon Intensity; but Better, albeit a Few Complications

First, RenovaBio certainly is an improvement over California’s LCFS in that it is performance-based rather that proscriptive-based, which often has unrealistic default CO2 values.  This has been a great point of discussion concerning US corn ethanol vs. Brazilian sugarcane ethanol.

As pointed out by one participant, this performance-based carbon intensity evaluation should be extended to ‘crop’ (feedstock) production. It is presently limited to fuel production only.  A third party certification entity will issue Carbon Credits based on each production facility’s technology and operations.  While CO2 intensity valuation of feedstocks should eventually be included in the protocol, it will become more complicated as wastes other than agricultural crops and residues become part of the picture.

The responsibility for meeting government goals is placed on fuel distributors to record Carbon Credits.  As a demonstration of how changing conditions often are counter to regulations, the Brazilian Senate, on June 20, 2018, passed a bill to allow sale of hydrous ethanol directly to retail outlets.  This option, bypassing the distributors, may make economic sense but is inconsistent with the proposed method for recording Carbon Credits.

Second, my understanding is that the petroleum portion of a fuel is not analyzed for carbon intensity.  While using an assigned benchmark petroleum value for measuring improvements is fine, if petroleum does not receive a carbon rating for fuel production, improvement figures will be skewed.  The carbon intensity of petroleum is going up and even if the renewable portion is going down, real improvements may not be present.  Brazil could be just ‘treading water’.

Third, there is no accounting for drive train efficiency.  Advanced internal combustion engines might someday top 50% thermal efficiency (presently at about 42 – 46% for advanced engines and about 34% for conventional gasoline engines) that is then reduced by transmission and drive shaft frictions.  An EV drive train does not have these reductions and also has easy access to regenerative breaking, another plus for efficiency.  Electric drive trains are not just for batteries (BEV) but are also for fuel cells (FCEV).  Fuel cells today can reach a 58% thermal efficiency that is reduced only by the electric motor efficiency (about 93%) for a total efficiency of about 55%.

The superiority of FCEVs is hard to dispute, but the prevailing idea of hydrogen as the energy carrier is easily disputed.  To me, the use of hydrous ethanol to fuel the FCEV is a clear winner for a number of reasons:  Its distribution network is simple and, in Brazil, already mostly in place.  Its production process is a lower carbon process than anhydrous ethanol for petroleum blending or production of hydrogen from natural gas, and it can be easily integrated with the fuel distribution systems for conventional ICE vehicles.

In Brazil, on August 4, 2016, Nissan introduced the “e-bio fuel cell vehicle” that runs on hydrous ethanol or water diluted hydrous ethanol. To me, continued development of biofuel-powered fuel cells is a no brainer.

The transparent performance evaluation to determine Carbon Credits for biofuels is a big step forward for Brazil.

There was no discussion of how Carbon Credits might be traded to even market variations and will need to be addressed.  The US ‘RIN’ system is certainly one not to be duplicated.  A transparent and restricted trading market should be established, possibly with government as the middle-man.

With a well-designed Carbon Credit market, incentives for drive train efficiencies can be incorporated into the Carbon Credit portfolio. To truly have a non-biased program, the value of an efficient vehicle should be integrated with the production of low carbon fuels.  These additional Carbon Credits could be aggregated by the vehicle dealer or fleet owner and traded through the Carbon Credit market.  It is conceivable that the value of these credits could be incorporated into the dealers’ financing for an efficient vehicle to incentivize purchase of that vehicle.

The ‘internet of things’ can easily be used to monitor transportation.  It is already being used by insurance companies to help determine auto insurance premiums.  This approach does not need to be a mandate and can be a voluntary program for owners of high efficiency drive train vehicles.  Through a performance-based assessment, the value of a high efficiency vehicle can be assigned a value for CO2 reductions beyond the default baseline presently being assumed.  Data for these credits could be gathered at time of fueling or through a mileage recording method.  Generating these ‘Carbon Credits’ based on kilometers driven or liters consumed would be easy.  What to do with them may be open to further discussion. Such a program could not only establish Brazil as a world leader in low carbon fuels, but also establish it as an early adopter of advanced vehicle technologies and potentially advancing their ‘green technology’ manufacturing base where products could be exported.

BILL BRANDON is the Chief Technology and Research Officer and Vice President for Leaders in Energy. Bill is deeply engaged with the biofuels and materials industry and also has a deep understanding of engines and alternative fuels.

Cambodia’s Renewable Energy ProspectsCanada and climate change: the transition to a low-carbon economy is a golden opportunity

Why we shouldn’t leave out biofuels in the energy transition