You are here: Home / Electric Generation / America’s Power Crisis: The Surprising Link Between Clean and Dirty Power (and how to break it)

There is no energy crisis.

The world is awash in energy. The sun will always shine, the wind will always blow, and the tides will always ebb and flow. The world even harbors vastly more fossil fuels than we can afford to burn.

Instead, we face a power crisis. Power is defined as how quickly we use energy. The difference is not empty pedantry. How we discuss the problem has substantial consequences for the solutions that we must consider. If our problem was not enough energy, or not enough clean energy, the solution would be simple: install solar and wind energy indiscriminately.

Unfortunately, almost every major challenge in energy policy is actually a problem of power. Even if the sun shines tomorrow, it doesn’t mean it will light our homes tonight. Not only do we need energy, we need it right now. That’s the problem of power.

In order to provide specific examples of our power crisis, I will use solar energy as an example for the rest of this article, but similar arguments apply to wind energy.

The electrical grid is a marvelous machine. For over a century it has provided us with electrical power on demand. We need not think twice before turning on a light switch, or air conditioner because we know the electrical power will always be available. Always. Rain or shine. Day or night.

Unfortunately, solar does not share this same 100% uptime dependability. Solar and wind are wonderful sources of clean energy, but they are poor sources of power because they are not dependable. While we would love to be able to use solar to replace fossil fuels, instead we must continue to add fossil generation capacity alongside solar generation.

I will first examine this link between clean and dirty power. Then, I will end by exploring how Tumalow is helping to break this link using battery energy storage.

The supply and demand for power on the grid must remain balanced at all times. This is a fact, and this is a difficult job because we don’t have to tell anyone at a power plant when we plan on using electricity. Our demand for electricity changes second to second, and it is up to the suppliers to keep up with the high demand for capacity. As more solar is added to the grid, this job becomes more difficult because the supply side becomes unpredictable as well. How does this occur? 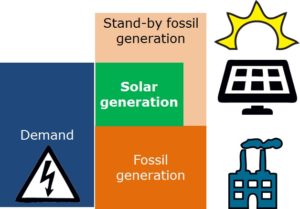 Imagine a solar park such as the 20MW installation Dominion proposed recently.  What happens during a partly cloudy day? In a matter of seconds, the production could drop by 75%. To keep the electrical grid stable additional generation must come online.

How much additional generation? Fossil fuel generators have a property called a “ramp rate” which describes how quickly the generator can change its output. A typical ramp rate is 8%/minute. If we assume that on a breezy day a cloud can cover the sun in 10 seconds, the implied ramp rate of solar is 450%/minute – over 50 times as high as the fossil generator ramp rate.

The same problem occurs in reverse as the cloud passes. Solar production soars in seconds and the fossil generator must “ramp down.” A generator which ramps up and down is less efficient than one that outputs power at a stable level.

Solar produces a lot of energy during the day and none at night. This creates two related problems. The first is the large ramp rate that occurs during twilight hours. We already discussed how difficult it is to ramp fossil fuel generation.

The second is more subtle: overproduction during the day. Many fossil generators cannot be shut down. They must generate electricity all the time because it is too difficult and expensive to turn them off, cool them, and then start them back up again when needed. This is already becoming a problem on the island of Hawaii, where the combined production from solar and fossil plants which cannot shut down can actually exceed the demand for power.

This effect has been called the “duck curve” because the graph of it resembles a duck flying to the right.

Let’s recap the challenges we covered so far. We cannot replace fossil generation with solar power. Instead we must continue to maintain fossil generation for those times when solar is unavailable either overnight or due to inclement weather. The required amount of fossil generation is significant, because the ramp rate of solar is so much higher than that fossil generation. And we cannot allow too much solar onto the grid due to overproduction concerns. These effects are all related to time: too much or too little generation all at once. This is the power crisis.

Make no mistake: solar energy is a revolution. Solar represents the first example of distributed electrical infrastructure. Energy storage devices such as large, stationary batteries installed into buildings will be the next critical piece of distributed electrical infrastructure. Not only can they can help solve the power crisis, these devices reduce electricity costs for the buildings they are deployed in.

Energy storage has a ramp rate high enough to keep up with intermittent solar power. Storage can be charged during times of overproduction, and discharged to reduce the peak loads. Because it is sited at the load, storage even eases the strain on aging transmission and distribution equipment.

Energy storage breaks the link between clean and dirty power. Storage is the perfect complement to capricious solar energy: a device that is a reliable source of power even if it’s not creating any energy.

The importance and inevitability of energy storage has been echoed by nearly every industry stakeholder from utilities (Duke Energy, Consolidated Edison) to regulators (California PUC, New York PSC) to business consultants (Deloitte, Accenture, Navigant), and is a rare point of consensus in a contentious industry.

Unlike many other parts of the electrical grid, storage does not need to be installed by mandate and funded by utility rate payers. Instead, we can solve the power crisis using market forces. Tumalow gives schools and businesses lower electric bills and emergency power at no cost. We do this by installing energy storage and sharing in the savings.

Buildings are charged for electricity differently than you are at home. Buildings face a surcharge levied on the highest power usage over any 15 minute period during the month. This is called a demand charge, and it can be 40% or more of a building’s total bill. Discharging energy storage during this 15 minute period reduces the demand charge, and reduces the building’s electric bill.

When a building sees this measured and verified savings on their electric bill, Tumalow shares in the savings to cover our costs. Because they paid nothing upfront, the project is cash flow positive from the first month. And the battery installation will continue to create savings month after month.

Electricity has been supplied and delivered in almost the same way for nearly a century: by continuing to build large power plants far away from an ever increasing demand. This model has successfully kept the lights on for 100 years, but it fundamentally limits the amount of clean but unreliable renewable energy it can accommodate.

Tumalow doesn’t think solar should be limited. With energy storage we can take the limits off solar energy and solve the power crisis, all while reducing your electric bill.

For more information, or to see if your building could benefit from a Tumalow energy storage solution, please email us at info@Tumalow.com.

‘What the Future Can Look Like’: Study Shows US Switch to 100% Renewables Would Save Hundreds of Billions Each Year