You are here: Home / Uncategorized / Young Activists Aren’t Waiting For Anyone

Older generations have generally favored “nowism,” which privileges short-term well-being at the expense of long-term environmental and societal sustainability. And today’s youth are done with it.

On the liberal left, an emerging multiracial activism surrounding environmental degradation has become visible. But it isn’t just limited to climate change: mass impoverishment and indebtedness, combined with the dismantlement of education, employment, and shared social systems, is forcing today’s young activists to confront the intergenerational implications of “nowism.” Nowism privileges short-term, present-generation well-being at the expense of long-term environmental and societal sustainability vital to younger and future generations.

“I have a 29-year-old daughter and a 6-year-old son,” said Dune Ives, managing director of Lonely Whale, a nonprofit that works to reduce plastics use and waste that imperils the oceans. “They’re both mad.”

So are millions of their peers and older allies worldwide, climate-strike demonstrations show. Deteriorating environmental conditions and fewer resources aren’t the only challenges future generations must confront. Younger Americans, already poorer and more indebted than their forebears, are being asked to sacrifice more to subsidize more opulent current generations, who seem amenable only to token moderation of their lifestyles and privileges.

Today’s climate and social justice activism go beyond popular clichés that young people are romanticizing the Green Agenda and Black Lives Matter. Younger generations and people of color of all ages are suffering real, imposed economic and environmental difficulties, yet are also displaying stunningly positive and future-oriented behaviors and attitudes on key indexes. They’re seeing a reduction in risks they face, while older and more established populations show sharply increased risks and have embraced backwards-looking politics. 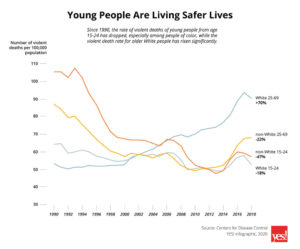 Figure 1 shows one aspect of the widening old-new divide that confounds traditional assumptions about social trends. On one hand, White people ages 25 to 69 show rising rates of violent death, including suicide, homicide, fatal accidents, and overdoses from 1990 to 2018, rising from 53.5 per 100,000 population in 1990 to 91.2 per 100,000 in 2018, according to the Centers for Disease Control and Prevention. Meanwhile, non-White people of all ages showed marked decreases in the violent death rate, and even younger White people have seen overall lower rate over three decades. (Among both White and non-White people, violent death rates are considerably higher in states that voted for Donald Trump in 2016 than those that voted for Hillary Clinton.)

Another manifestation of nowism, generational wealth, peaked with the baby boomers (those born from 1946 to 1963). In contrast, the following Generation X (1964-1980), was the first in modern times to be poorer than its parents. Millennials (1981-96) are poorer still—they own 3% of the nation’s wealth, compared with 21% owned by baby boomers and 16% by Gen Xers when the average age of those generations was 35. The 7-1 per capita wealth gap between boomers and millennials approaches the 10-1 wealth gap between White and Black Americans.

Attitudes and behaviors also increasingly split along generational and racial lines. Climate change arouses much more concern in racially diverse younger generations—as might be expected, since they will face the brunt of its impacts.

A 2018 Gallup poll found that considerably higher proportions of millennials and Gen Zers (born from 1997 on) believe in and worry about global climate change, though many older people also were aware. Likewise, Black and Hispanic Americans are more concerned about climate change than White people are.

Taken together, what can be drawn from these younger-generation trends of higher environmental awareness, greater safety from violence, and less overall wealth?

“There’s this generational divide,” Ives said. “Are we really able to shutter our own egos as adults, our own expectations of what we think the world owes us, what we earned through the years?”

The remedy to nowism is not to ensure that younger and future generations enjoy the high-consumption, high-pollution lifestyles of present generations. That isn’t sustainable. Younger Americans need to inherit environments capable of sustaining moderate, equitable living standards.

Falling generational wealth, instead of being a net loss to quality of life, can become an important adaptability tool in the transition to a less wasteful future. However, a smooth transition won’t happen automatically. To avoid an outcome in which poorer nations and communities bear a disproportionate impact of waste and pollution, we will need to make major changes to the structure and uses of resources that recognize that inequality is a major impediment to sustainability.

Previously I have argued that we need to stop misrepresenting young Americans as symbols of a culture gone wrong. Instead, we need to look to those real young-age trends as demonstrating the need to bring young people into greater power and shared leadership.

“It is impossible for them to turn away from this,” Ives said of the challenges the young face. “They see their future. They know what’s coming. Seventh graders know that in the year 2025, how hot it’s going to be, they’ll know how much plastics will be in the ocean.”

The use of disposable plastics, which were originally developed for sanitation against disease (“the Dixie cup is still identified as the thing that saved us from the Spanish flu,” Ives noted), is surging again in the coronavirus epidemic’s demands for gloves, masks, and to-go containers. The plastics industry has been lobbying for a $1 billion congressional bailout, a prime example of the mantra, “Never let a good crisis go to waste!”

Young activists may be opting for more direct action than relying on adults in power, but older generations still have a key role to play. “We shouldn’t be voting for ourselves anymore,” Ives said. “We should be voting the way these kids want us to vote.”

There’s evidence it’s working. In the annual Ocean Heroes Bootcamp hosted by Lonely Whale, Captain Planet Foundation, and Point Break Foundation, Ives said, “the kids come. Then the parents come… The parents are concerned. They want to understand what their kids are working so hard to accomplish.”

Mike Males is a senior researcher for the Center on Juvenile and Criminal Justice, the principal investigator for YouthFacts, and the author of five books on American youth.
Editor’s note: This article was originally posted on for YES! Magazine, a national, nonprofit media organization that fuses powerful ideas and practical actions. Licensed under a Creative Commons Attribution-Share Alike 3.0 License.
Investing in Sustainability: How Businesses Can Save Money and the PlanetInvesting $2 Trillion in US Clean Energy and Infrastructure Could Create Millions of ‘Good Jobs,’ Analysis Finds

Building a Greenhouse? Research These 5 Things Before Starting