You are here: Home / Smart Grid / Unlicensed Wifi Spectrum and the Smart Grid

Over 70 clean energy professionals gathered on Tuesday, March 22, 2016, at the Edison Electric Institute (EEI) in Washington, DC for the event, How the Smart Grid and Unlicensed Spectrum Impact Energy Efficiency, sponsored by WifiForward. Event discussions were captured under the hashtag #LESGENERGY. The event examined the importance of smart grid technologies in enhancing the grid for energy savings and distributed energy technologies, and in particular the important role of access to radio spectrum and wireless services to support smart grid technologies.

Janine Finnell, Founder and Clean Energy Ambassador, Leaders in Energy welcomed the attendees. She noted how timely and relevant it was for this event to take place at the Edison Electric Institute, an association for investor-owned utilities. Their members operate in all the 50 states and the District of Columbia, and the organization itself dates back to 1933! 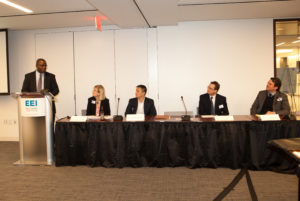 The Public Utility Holding Company Act (PUHCA) was passed by the U.S. Congress in 1935, thus EEI was started 2 years in advance of PUHCA, which facilitated the regulation of electric utilities.   Legislation known as the Energy Independence and Security Act (EISA) was enacted in 2007 to help upgrade our current electric system to the Smart Grid. In a nutshell, the term “Smart Grid” refers to the increased use of communications and information technology in the generation, delivery and consumption of electrical energy.

Janine also gave a shout out on Leaders in Energy and its mission to build a community of leaders to enable solutions for a sustainable energy system, economy, and world.

Welcoming remarks were given by Lawrence E. Jones, Vice President of International Programs at Edison Electric Institute, who received a Ph.D. in Power Systems Engineering from the Royal Institute of Technology in Stockholm. As part of the leadership of an association that represents investor-owned utilities in the U.S. (70% of the domestic industry) and over 40 countries, Jones is well placed to take the pulse of the power generation and distribution industry. According to Jones, utilities are increasingly focusing on how consumer behavior and energy consumption impact the industry and improve energy efficiency through smart grid technology and the wifi spectrum: “If we bring together utility and telecom worlds, there’s a lot we can do for society,” he said.

Full biographies are available on the event announcement. Unfortunately Chowdhury could not join due to a hitch in his travel plans, but in his stead, Russ Ehrlich added his perspective.

The unlicensed spectrum, according to Cheung, refers to frequencies set aside internationally for any use that complies with rules, but that does not require a license. Cheung pointed out that smart metering depends on wireless network, and this could be from the unlicensed spectrum. He gave the audience a few resources from the federal government in this area, including the Presidential Memorandum, “Unleashing the Wireless Broadband Revolution” (2010), which requires that the Federal Government make available 500 MHz of Federal or non-federal spectrum for both mobile and fixed wireless broadband use by commercial users within 10 year. Another resource was the Report to the President, Realizing the Full Potential of Government-Held Spectrum to Spur Economic Growth by the President’s Council of Advisors on Science and Technology (2012). The Council is comprised of academic, business, and government leaders.

Cheung spoke about the changing environment for risk in the electricity sector. Increasing extreme weather events and aging assets put at risk the capacity of electric utilities to maintain critical functions when the power goes out. Utilities need communications to be restored and operational in order to restore the grid. But there also needs to be innovation in the grid to ensure continuing economic prosperity for the nation. 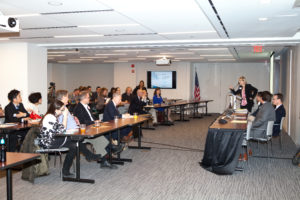 Ehrlich from Pepco gave the utility perspective. The utility’s goal is to provide reliable efficient electricity to customers because customers want lower bills, and they want the lights to stay on. The utility is networked with redundancies to make the grid work.

A well networked grid requires a good communications network. For Pepco, the network is built on fiber optics, with 5,000 miles of cables. The utility looked at different bandwidths to see what the network could support. As Ehrlich pointed out, the challenge with a big utility company is there’s no blank check to pay for the last mile of fiber optic cables.

The event was followed by networking. Observations from the attendees included the following:

“Although utilities are widely viewed as stodgy, risk-averse entities, it was refreshing to hear about Pepco investing a lot of resources into advanced smart meter technology for a more efficient grid.”  (MB)

“Very informative! I was particularly surprised to learn from Russ Ehrlich that utilities presently rely on a patchwork of frequencies because there is not a specific part of the spectrum allocated to their needs, given how integral and critical communication is to reliable and secure grid operations.”  (DA) 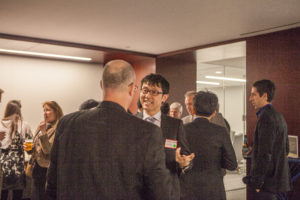 Thanks to Leila Mathur Peck, Vice President at Morgan Stanley Wealth Management, for her contributions to this article. All photos courtesy of Agustín Cruz – augie.cruz@gmail.com. Preceding this event, we shared an article titled Smart Grid Perspectives – Bottlenecks in Today’s Grid Transformation from Bert Taube, the 2,000th person to join the Leaders in Energy Research, Communications, Policies & Analysis LinkedIn group. Thanks to everyone who played a role in putting this all together.

We like to help our members wherever we can. If you want to write a blog article, speak, or help sponsor one of our events on a particular topic of importance to you, let us know.

[i] The day following the March 22 event, Exelon concluded its merger with Pepco Holdings. 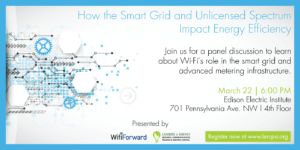 COLD@HOME: Probing the growing problem of fuel povertyLeaders in Energy: a fast-growing matchmaker for employers, collaborators, and perhaps investors

Technology: A Key Driver to a Sustainable Future