You are here: Home / sustainability / There is No Planet B: A Visit to a Solar Open House

The impending environmental crisis is undeniable. Writer and management consultant, Margaret Wheatley once said “There is no power for change greater than a community discovering what it cares about”. Communities in DC are one example leading the change towards climate change. Recently I attended a solar open house in DC organized by National Solar Tour. The house owner was gracious enough to give me a tour of the house and his Solar Rooftop installation. This house shows how beauty and sustainability can go together.

There are 22 Solar Photovoltaics (PV) panels installed on the rooftop which supplies nearly 8kW of solar power to the household and helps to make the house a Net Surplus. The systems take care of the utility needs of the house and feeds back the excess electricity produced to the grid using SolarEdge Inverter Technology. The solar panels installed are not put on any inclination, which is a slight disadvantage because it is not at an optimal angle. However, the change in electricity production is negligible and since it’s on a ballasted system, it reduces or rather nullifies the cost of installation involved. The Ballasted system is an alternative to the standard solar mounts which avoids drilling down roofs. Concrete blocks are provided over the panel area to secure them from wind lift off. The maintenance cost is also zero, since there are no moving parts. 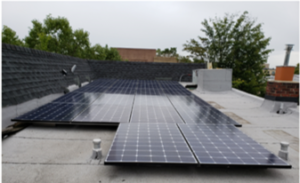 A typical rooftop solar power system consists of PV panels and an inverter system. PV panels harnesses energy from the sun by producing DC current. The inverter converts this DC current to a more usable AC current for household appliance and can be fed into the utility grid. Fifteen years ago, the invertor technology also known as String Invertor was very primitive, panels were connected in series or “strings” and even if one them fell under shade, the whole string panel production was affected. This especially becomes an issue in a household solar installation, since chances of a panel being in shade becomes more.  One important advancement that solar power technology has made is the power optimizers and microinverters can theoretically extract maximum power from each panel. Microinverter systems are made up of individual “micro” inverters which are connected to each PV panels rather than having a single string inverter and without being affected by shading or poor performing panel. Power optimizers on the other hand is a low-cost version of the microinverters which are still connected individually to the panels send out an “optimized” DC current to a single string inverter. Power Optimizers make the DC to AC current conversion more efficient.

The homeowner makes use of various federal and utility incentives and programs such as the Solar Renewable Energy Certificates (SERCs) and Federal Income Tax Credit (FITC) which gives him a substantially faster rate of return on his panel installation. SERC are solar incentives that allows households with solar rooftops to sell certificates for the energy produced to utilities. For every 1000-kilowatt hours (KWhs) produced, a homeowner gets one SERC–which are worth over $250. In addition to the SERC there is a 30% FITC which taxpayers can earn for their Solar Panel installation. 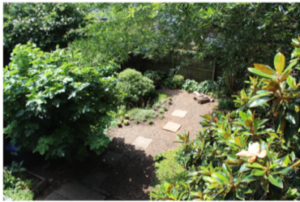 In addition to this, they have installed low e-coating windows– low emissivity windows that block the ultra-violet rays of the sun–so as to promote minimal power usage. Also, on the west side of the house, they have planted deciduous trees, which block the sunlight in the summer afternoons to reduce energy load further by reducing AC and fan usage. Since electric heat consumes a lot of power, the clothes here are air-dried. There is LED lighting throughout the house. To reduce storm surge water, they have an installation that collects the water from the roof and sends it goes directly into the backyard.

This homeowner’s practices demonstrate his passion for the environment and importantly shows how D.C. residents are doing their part fighting climate change by shifting from fossil energy to greener sources.

Aarathi Vadapalli is a recent Chemical Engineer Master’s graduate from the University of Maryland. She is currently volunteering at Advanced Biofuels USA. Her Master’s research focussed on semiconductors and thin film deposition which can be used in solar panels. She is passionate about fighting for climate change and environment. Her primary interests lie in renewable energy with a focus on biofuels.

Gaining Momentum on Your Green Career: An Interview with Dr. Beth OffenbackerFarmers and animal activists help form unlikely alliance to preserve and protect life on Earth

Solarize: the Grassroots Initiative that Cut Solar Costs up to 35%