After a slew of earthquakes triggered from shale oil and gas operations, the Oklahoma Corporation Commission (OCC), the state’s oil and gas regulator, released new rules designed to reduce seismic activity. Hydraulic fracturing—fracking—is being used in combination with horizontal drilling to extract shale oil and gas in what has been called the “US’s hottest new area for horizontal development” in the state’s SCOOP [1] and STACK [2] shale plays, located in the Anadarko Basin.

The two hydrocarbon-rich shale formations are particularly attractive to developers both because of their “competitive drilling costs” in addition to the fact that they have “stacked formations,” meaning that drillers can target oil and gas at multiple layers in the rock strata. The two fossil fuel-rich formations have seen an increase of 70% of initial production rates since 2013.

However, increased production has also led to a significant rise in the number of earthquakes and seismic activity in the area. Fracking, an “unconventional” oil and gas extraction method, involves pumping a mixture of water and chemicals at high pressure deep into the porous shale rock to blast open cracks and liberate trapped fossil fuel resources. Once the pressure is released, the wastewater flows back to the surface, allowing liberated oil and gas to flow to wells. But this “produced water” has to have somewhere to go, and is often disposed of by injecting the wastewater deep into underground formations. 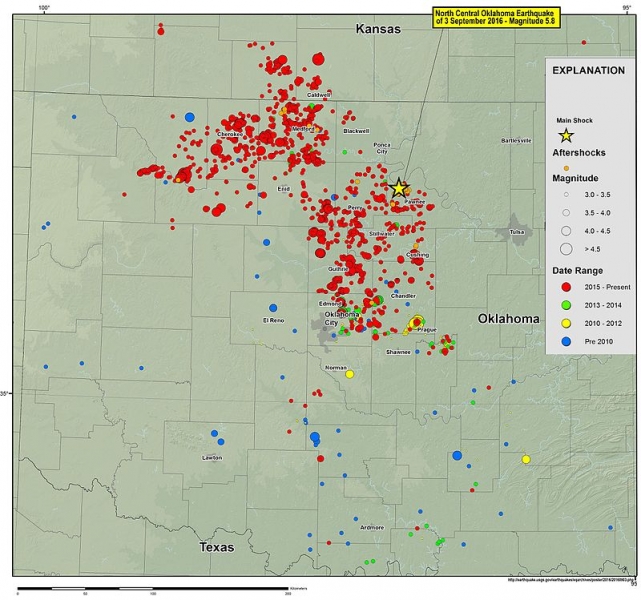 Wastewater injection, a process similar to fracking and used to dispose of waste fluids from fracking as well as from other industrial activities, has been linked to increased seismic activity. A new study published in Science just a few weeks ago showed that the linkage is even stronger than previously thought—seismic activity in Oklahoma is “strongly linked to wastewater injection depth.” The researchers found that the deeper underground the site of water injection, the stronger the resultant earthquake, and they could even predict the approximate magnitude of the quake based on the depth of the underground injection site.

The rise in number of earthquakes in recent years in Oklahoma is unprecedented. In 2008, the state had had only one quake of magnitude 3 or greater, but by 2015, this number had risen to over 900. Oklahoma had transformed from a state with very little seismic activity to one that was more seismically active than parts of California—a change that follows the ramping up of oil and gas operations in the state. With now over 10,000 underground injection sites across the state, Oklahoma well operators have injected an average of 2.3 billion barrels of wastewater each year over the past seven years.

While the OCC introduced new regulations in 2015 to reduce the amount of oil and gas wastewater injected underground, the magnitude or energy of the earthquakes experienced in the state has not been reduced as much as expected. Rather, some of the largest earthquakes experienced in the state, including a quake of magnitude 5.8 near Pawnee, occurred after the new wastewater injection regulations were implemented.

Nonetheless, since December 2016, there have been 80 earthquakes of magnitude 2.5 or greater in the SCOOP and STACK region of the state, according to OCC public information manager Matt Skinner. Clearly, the 2015 regulations were not enough to curb the quaking. The new regulations released just last week are therefore designed to reduce seismic activity resulting from fracking operations, not just the wastewater injection processes stage.

The OCC announced last week that all firms within certain areas are required to use a seismic array, which detects underground shaking and gives information in real time. The new rules also reduce the minimum earthquake threshold for which operators have to reduce activity, from magnitude 2.5 to magnitude 2, and after earthquakes of magnitude 2.5 or greater, well operators and drillers must cease all activity for at least six hours.

By targeting the SCOOP and STACK areas, means regulators are recognizing that the process of fracking itself, in addition to wastewater injection, can cause earthquakes.

There are other potential solutions. For example, University of Southampton Prof. Thomas Gernon, one of the authors of the recent Sciencestudy, explained that current wastewater injection regulations in the state require operators to either reduce the amount of injection or decrease the depth of injection site, but often do not specify by how much. He therefore recommends that “raising injection well depths further above the basement rocks in key areas could significantly reduce the annual energy released by earthquakes, in turn making larger earthquakes less likely.”

As policy discussions continue to shift, recent studies and experience confirm the link between unconventional oil and gas operations and induced seismic activity. Until all of the complex processes are better understood, regulators should take a more precautionary approach to avoid increasing numbers of earthquakes.