You are here: Home / CWEEL / Perspectives on Advancing Gender Equity in the Energy Industry

The 6th Annual Clean Energy & Sustainability Extravaganza program at the University of Maryland-College Park on February 28, 2020 started with the Council on Women in Energy & Environmental Leadership (CWEEL) luncheon panel on advancing gender equity in the energy industry. The four panelists shared a variety of experiences and perspectives, yet with common threads between them.

We started off hearing from Laurie Wiegand-Jackson (shown at podium) who has a successful career both in corporate America and as the owner of Utility Advantage. Laurie is the founder of CWEEL and shared some of the goals and benefits offered by the Association of Energy Engineers (AEE), including the most recognized certification of Certified Energy Manager (CEM). Laurie spoke about how CWEEL supports professional development for women in the industry through various activities which include scholarships and mentoring. CWEEL participated in a study on Women as Levers of Change and we are looking forward to its release later in March. CWEEL is also participating in Vision 2025 which is devoted to increasing and empowering women in the energy and environmental fields. This is an important endeavor and we need everyone, men and women, to get involved to help achieve gender parity. Laurie also shared stories about how she has had issues in her career with being driven and working hard but then hitting the glass ceiling repeatedly. Now as the President of her own business she leads in a way that treats everyone how she would want to be treated. She believes transparency on gender parity is good for business. She stressed we need open conversations about equity in the workplace, and there need to be goals for this with targets and measurements to hold them accountable just like any other corporate goals. 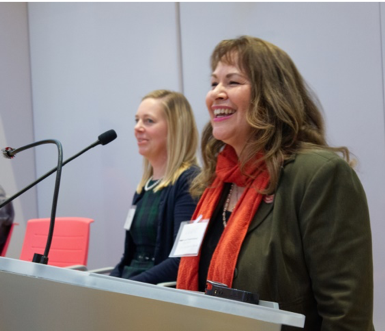 Next we heard Janine Finnell, the passionate founder of Leaders in Energy, who shared memories from the past CWEEL events at various local universities highlighting women in energy and sustainability careers. Janine divulged the foundation of her vision and determination through the journey of a young woman learning about adventure, risk-taking, and perseverance riding her bicycle across the country, then a year abroad in Nigeria, then writing her Master’s thesis on methane digesters in India providing biogas and fertilizer. She knew energy was where she was going. But she was surprised to learn it was not easy being a woman in this field. Janine discussed a report by the International Renewable Energy Agency (IRENA) on gender perspectives in renewable technology that highlighted how much needs to be done. Some of the solutions IRENA recommends include gender targets, legislative policies i.e. Canada requiring 30% of licensed engineers to be women by 2030, better work policies, flexible work schedules, mainstreaming gender perspectives i.e., female engineer blogs, getting more women on company boards, and creating networks and supporting mentorship through organizations that help women in the industry.  She mentioned that some researchers are also making the case that having more women in the energy industry will help speed the shift to a low carbon energy system (see suggested reading below). Janine inspired us that we can do so much as a country to help create the conditions for jobs for all of us so we can do the important work that needs to be done.  As an example, she mentioned the book by Basil Hero titled “The Mission of a Lifetime: Lessons from the Men Who Went to the Moon” which describes this complex human and technological organizational feat in achieving this great societal undertaking and how we need a similar determination to meet our current challenges such as climate change. She provided some personal observations and solutions including the importance of innovative workplace policies, benefiting from male sponsors, the importance of continuing education, networking, and helping others and volunteering. Janine impressed upon us, drawing from a recent Harvard Business Review study (see suggested reading below), that for women to achieve workplace equality with men, corporate society will need to implement a more humane work-life balance with less grueling work schedules. 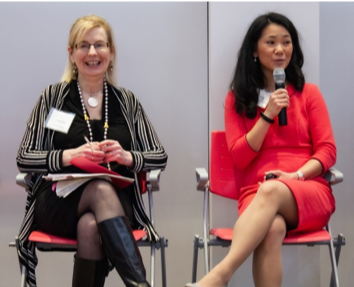 Next up we heard from Janine Helwig (pictured above, holding microphone). Janine depicted her career in stages and shared observations of gender parity. As a woman in college she knew engineering was a male dominated major but was naïve about any gender inequalities and did not initially sense it, although she has retrospective observations. Even in grad school, she saw inequities in a 1:10 ratio of female professors, but she still felt equivalent. Moving into her internship out of grad school, she was fortunate to find a great environment to work with men in the firm who advocated for women. But from there she moved into a federal job as an energy manager and, as the only woman in the entire facilities department, she struggled to have her voice heard. As this was clearly not the environment where she could prosper, she moved on as a staff engineer with George Washington University and spent five years in that position before she achieved her current position in a leadership role as the Director of Utilities and Engineering over an all-male team. She found she had to re-establish her clout and re-earn trust, and was constantly second guessing herself.  At this stage she also became a mother and then struggled with work-life balance. Janine reflected on the reality that women spend a disproportionate amount of time doing domestic house work in addition to their jobs and cited a study with the International Labor Organization which concluded women essentially work two “shifts” and give 100% to both. In working through those difficulties, she found what she referred to as the “Ikea effect” where if you put in personal labor on something you get more satisfaction and you achieve more fulfillment and happiness. You recognize the sacrifices you make to achieve a goal. In the end it is more work-life integration rather than balance. It looks different for everyone and sacrifices have to be made to achieve it. Janine left us with a quote from Jack Welch “There is no such thing as work-life balance, there are work-life choices and you make them and they have consequences”. 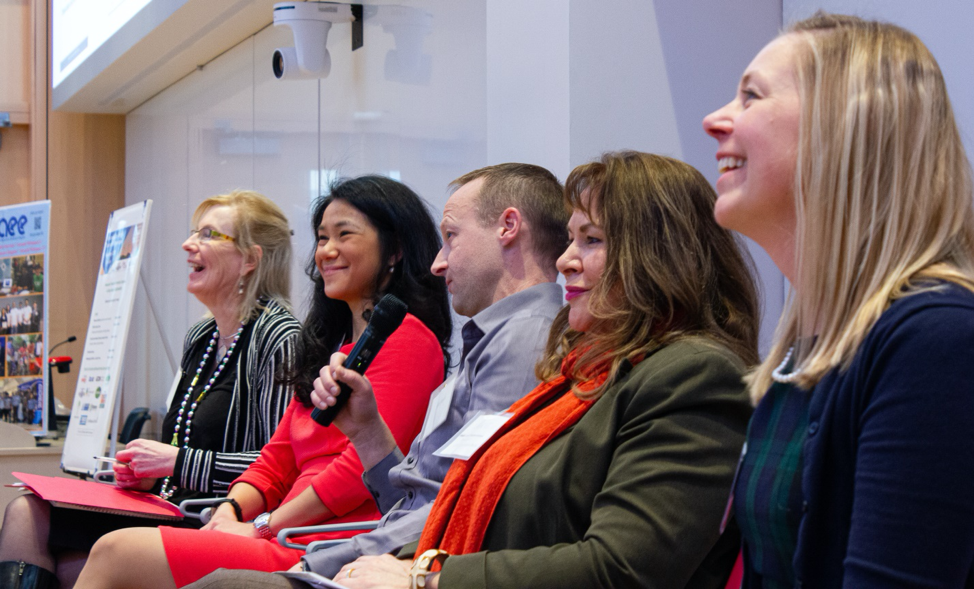 Next we heard from Ben Rupert, an entrepreneur working in energy management, although he is primarily a stay-at-home dad of two toddlers. Ben explained how he grew up in a very blue collar “gender traditional” environment in rural Michigan with a father who was an electrician. Yet his professional life took him to the Seattle and San Francisco Bay Areas where he was fortunate that his most prominent mentors and role models ended up being impressive women who had risen by finding their own way in the male dominated energy and utility industry. Yet he also saw the perspective of women’s struggles. Eventually Ben’s wife took on a prominent role at George Washington University with a lot of responsibility while she was also pregnant with their second child. She was extremely busy and he had an opportunity to move into consulting work and take a new role in the family as the primary caretaker. He still worked to move his career forward and support his wife in moving her career forward while also working to be a good parent. He echoed the sentiment that there really isn’t work-life balance. Some advice Ben provided is to recognize there are sacrifices with the decision and embrace the discomfort. He bragged about his wife and her career accomplishments, but noted she too had taken a hard look at her goals and drive and how she could make it all work and what sacrifices she would need to make. Later Ben provided insight about some interesting experiences he has had as a stay at home dad with strangers who do not consider he could be the primary caregiver. He has observed there are disparate gender role ideas in various cultures, geography, peer and age groups and it is an evolving society.

The panel presentation can be viewed at the Leaders in Energy Event Archives.  This event was conducted in partnership with the Association of Energy Engineers National Capital Chapter (AEE) with support from the AEE’s Council on Women in Energy and Environmental Leadership (CWEEL). Many thanks also to Edison Energy for their sponsorship of the CWEEL luncheon and panel session.

Anne Kirby has ten years of experience developing solar projects. She considers much of her role as an educator and trusted advisor, helping companies navigate through the complexities of the evaluation of solar. Although she graduated from Widener University with a bachelor of science in Management Information Systems, it was her environmental studies there that drove her passion for creating a more sustainable world. She is the Private Sector Chair of the Delaware Energy Services Coalition, is on the Steering Committee and Outreach Committee Co-Chair with Green Building United, and is President of her Civic Association.