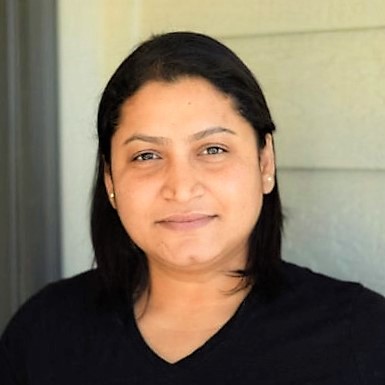 On Friday, June 8th, Leaders in Energy held its inaugural Green Leaders for Local Impact Retreat at the Potomac Overlook Regional Park in Arlington, Virginia. The event was co-hosted by the Nature Leadership Center.  The purpose of this retreat was to celebrate the World Environment Day (June 5th) and examine how the United Nations’ (UN) Sustainable Development Goals (SDG) can be translated into local actions.

Participants explored how community initiatives and local personal leadership could help accelerate action to address global goals, particularly Goal 7 (Ensure access to affordable, reliable, sustainable, and modern energy to all),  Goal 8 (Promote sustained, inclusive and sustainable economic growth, full and productive employment and decent work for all), and Goal 9 (Build resilient infrastructure, promote inclusive and sustainable industrialization and foster innovation).  Additionally, the retreat was an opportunity for local green energy champions to get to know each other, build networks, and map local green energy initiatives being led by local governments, businesses, and citizens.

Janine Finnell, Executive Director of Leaders in Energy and Dr. Beth Offenbacker, Founder of the Nature Leadership Center and Director of Training and Development at Leaders in Energy, welcomed the attendees. Finnell highlighted one major global environmental success on behalf of the United Nations has been the Montreal Protocol where harmful chemicals, such as chloroflourocarbons, which were eating a hole in the Earth’s ozone layer were successfully banned in a relatively short period of time.

As 17 goals are a lot to consider, the intent was to initially focus on selected goals (numbers 7, 8, and 9) on clean energy, jobs, and resiliency.  The organizers also realized the holistic and crosscutting nature of these goals, so the retreat was also very open in considering aspects of the other SDG goals.  Finnell thanked MOM’s Organic Market for providing the delicious healthy food. 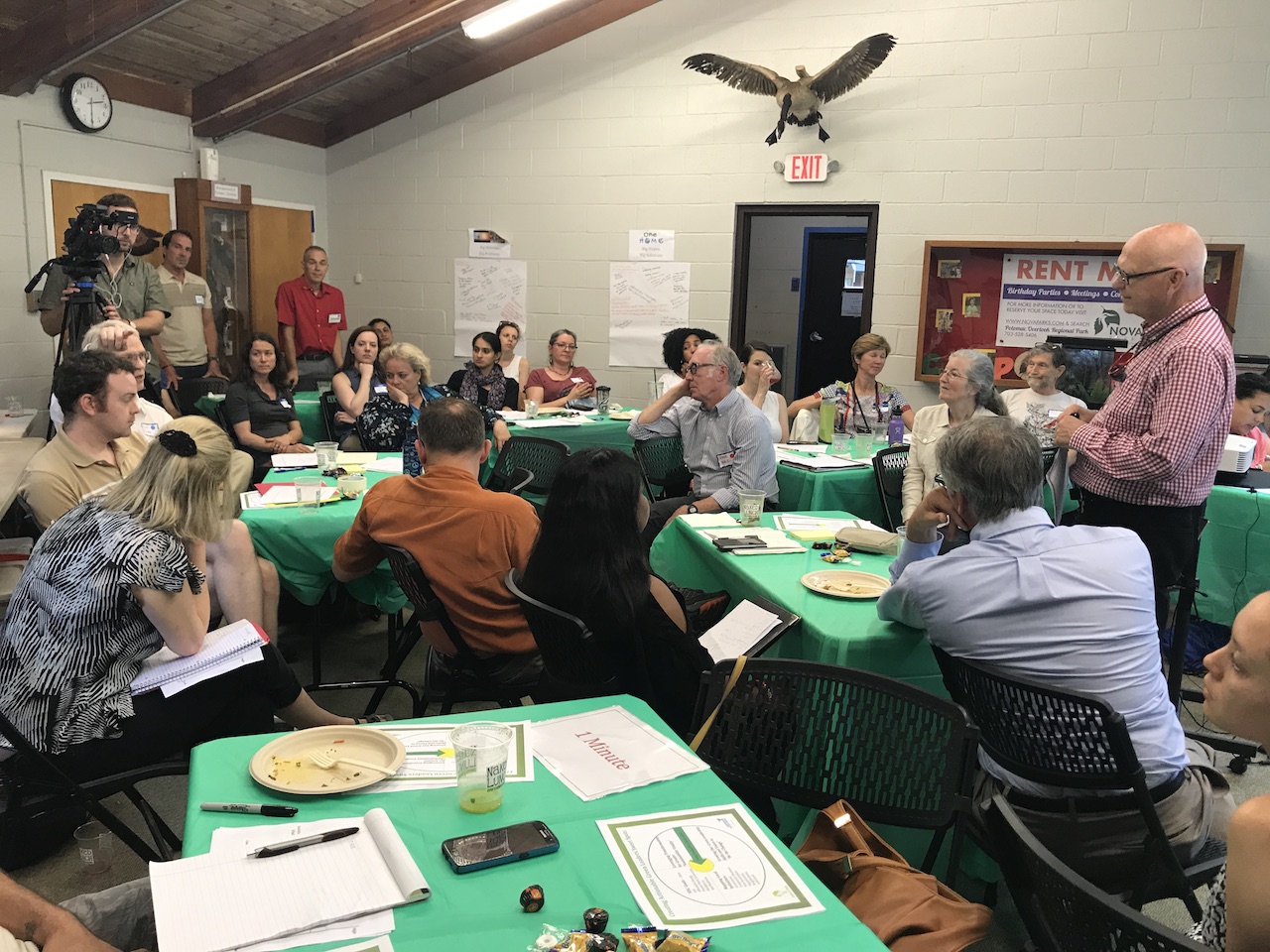 The Retreat was divided into several sessions including an examination of the SDGs, a Glimpsing the Future exercise, Mapping Local Initiatives exercise, and green leadership exercise.  It also included a nature walk.  The purpose was to be as interactive as possible in exchanging ideas. People also listed Big Opportunities and Big Challenges and they were included in some of the discussions.

The first speaker of the day was Nancy Donaldson, Past Director, International Labor Office.  She provided an overview of the 17 SDGs goals and then focused UN SDG 8 on jobs and economic development.  Donaldson began her talk by introducing the 17 SDGs, pointing out that they were based on the 8 Millennium Development Goals that were able to bring many positive results worldwide since inception. She observed that Goals 8 and 9 can work together in such a way that sustainable energy projects mainly based on renewable energy projects like solar and wind power plants can create good jobs and decent work. New energy projects can also make small communities resilient when faced with natural hazards and calamities.

Diving deeper into SDG 8, she shared statistical data with the participants that half the world’s population still lives on of about $2 a day and even in the United States having a job cannot guarantee an escape from poverty. Putting green job creation at the heart of economic policy-making and development plans will generate not only decent work opportunities but also more robust, inclusive and poverty-reducing growth. Davidson concluded her talk by sharing some of the targets under the SDG 8 that need to be achieved by the year 2030. 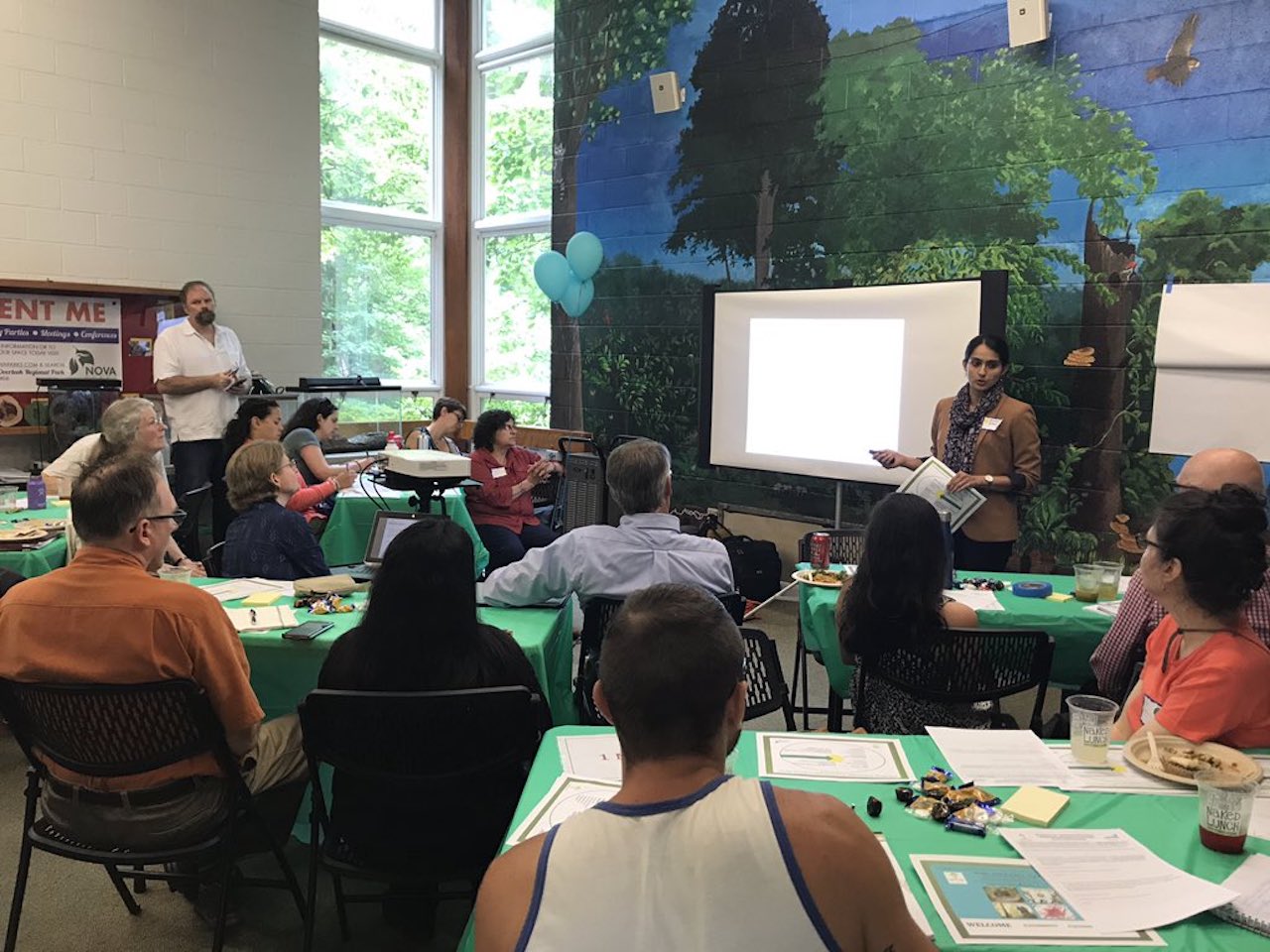 The second speaker of the day was Ruchi Soni, Energy Access Manager, United Nations Foundation, who spoke mainly on the Goal 7 on Affordable and Accessible Energy. She began her talk by introducing the audience to the details of SDG 7 and its specific targets.  The main challenge in achieving the lofty targets under SDG 7 is in developing countries where energy consumption is growing. Though significant progress has been made to reduce global energy intensity, it still falls short of the 2030 targets. In the United States, Soni pointed out that the electricity generation takes up most of the fossil fuel consumed in the country. The U.S. also does extremely well in other indicators like energy access, energy efficiency, and the contribution of renewable energy to total electricity produced in the country when compared with other countries. However, much improvement needs to be done, and individuals can contribute by using fuel-efficient vehicles, changing to district energy production systems to cleaner alternatives, improving building efficiencies, and using energy-efficient devices in households and workplaces, among many other options. Soni concluded her talk by providing some global examples, where adapting clean and efficient use of energy have helped communities reduce their energy intensity.

The third speaker, Annette Osso, Directing Manager, Resilient Virginia, brought to the discussion what local communities are doing to address the SDG 9: Industry, Innovation, and Infrastructure. Resilient Virginia was established in 2014 for accelerating resiliency planning in Virginia communities, including households, businesses, governments, and institutions, to better adapt to natural and human-made challenges while remaining healthy, vibrant, and safe places to live, work, and raise future generations. Osso explained the different targets under the SDG 9 and presented some of the critical details of the status of infrastructure in the US and how climate change would economically impact the country. She expressed the belief that given the impact of climate change to alter the seasons, that the US needs to develop infrastructure that can adapt to those changes. Preparing local infrastructure for the impending natural calamity-induced damages would require major investments and state and local government agencies would require taking new leadership roles.  Osso shared with the audience some of the actions taken by the government locally to meet the goals of the SDG 9, including the OneNYC program of New York City, the Baltimore’s Sustainability Plan, and the City of San Jose’s plan for implementing UN’s SDGs at the local level that were formed in the past couple of years. She also described the different actions taken by the local governments: the Sustainable DC Plan, the Metropolitan Washington Council Government’s Regional Climate and Energy Action Plan, among others.

The Future of Sustainability

Jim Burke, Futurist, Ascent Virginia, spoke next. His talk focused on how sustainability would look in the future. He opined that forecasting sustainability would require understanding one’s own assumptions and biases and looking beyond them while stepping out of individual comfort zones. He insisted that to forecast sustainability, it is pertinent to collect information taking a systems approach and to analyze how trends interact and influence each other while looking for weak signals and clues. Ultimately, he pointed out a forecast is most useful for the questions it raises.

The first session was followed by a nature walk where the participants spent some taking a stroll around the Potomac Overlook Regional Park, getting introduced to the beautiful surroundings and interesting flora and fauna of the area. This was followed by a session where participants were broken into small teams to discuss on to apply the SDGs goals in the Washington DC region. .

One of the thematic areas for discussion was SDG 8 and what the local county was doing to meet the goals. Lindsey Shaw of Montgomery County shared detailed descriptions of several Montgomery County programs, including Property Accessed Clean Energy Programs (PACE) financing.  There was some discussion regarding how these programs link to employment, but an acknowledgment that the connection to green jobs and employment is not explicitly included as objectives of these programs.

A similar observation was made about Arlington County’s Energy Master’s program, which seeks to train Energy Masters to help with residential energy efficiency.  Again, the program’s primary goal is to reduce energy waste. One idea was to develop more apprenticeship programs to train energy auditors. .

Additional discussion included “pickers,” people who earn a living (or partial living) by finding items of value in the trash. This is an important source of income for many populations in lesser developed countries, providing “employment” and reducing waste.  Finding valuables in waste is not nearly as widespread a practice in the US and is even illegal in some jurisdictions.  No solutions were forwarded, but there was an acknowledgment that some form of this might serve to support this SDG.

Another area of interest was raised around styrofoam. Currently, styrofoam is not recyclable in the DMV; it ends up in landfills where it takes up lots of space and adds to toxicity.  An opportunity to support the circular economy while also forwarding goals of SDG 8 was recognized.  Local advocate Miriam Gennari (aka Styrofoam Mom) has been seeking to identify entrepreneurial companies that would like to use Styrofoam as a feedstock.

The second thematic area of discussion was on SDG 7 where the participants discussed clean energy projects locally. Where programs like the Empower Maryland and Energy Coach Network, Maryland, are some programs initiated by the local state-level government, programs like Solarize NOVA, Grid Alternatives, Energy Masters with EcoAction Arlington, and other solar co-op programs are driven by community members. The participants pointed out that the state of Maryland also provides incentives for electric vehicles and the Electricity America Program from Volkswagen is looking to fund EV Chargers for large buildings.

The third thematic area was SDG Goal #9.   Annette Osso facilitated the group and wove in themes from the organization that she directs, Resilient Virginia and their work to connect the rural/urban communities for better resiliency planning.  A representative from the Metropolitan Washington Council of Governments also contributed in regard to their efforts taking place that are discussed in their Regional Climate and Energy Action Plan.

The fourth thematic area for discussion was that of the “Other SDGs” group. The focus of the discussion was primarily on ways to localize the SDGs through organizations of affiliation to attendees. The “other” SDGs group discussed a variety of topics, including: the importance of using education as a vehicle for correct methods to dispose of different products, the idea of implementing gardening in the elementary school curriculum as a project-based learning activity for better overall health and nutrition from an early age, the Global Co Lab’s partnership with the Smithsonian in an effort to facilitate action-oriented discussions among youth and adults on the environmental SDGs through design lab salons, and MOMs active donations and food banks for the homeless in the D.C. area. 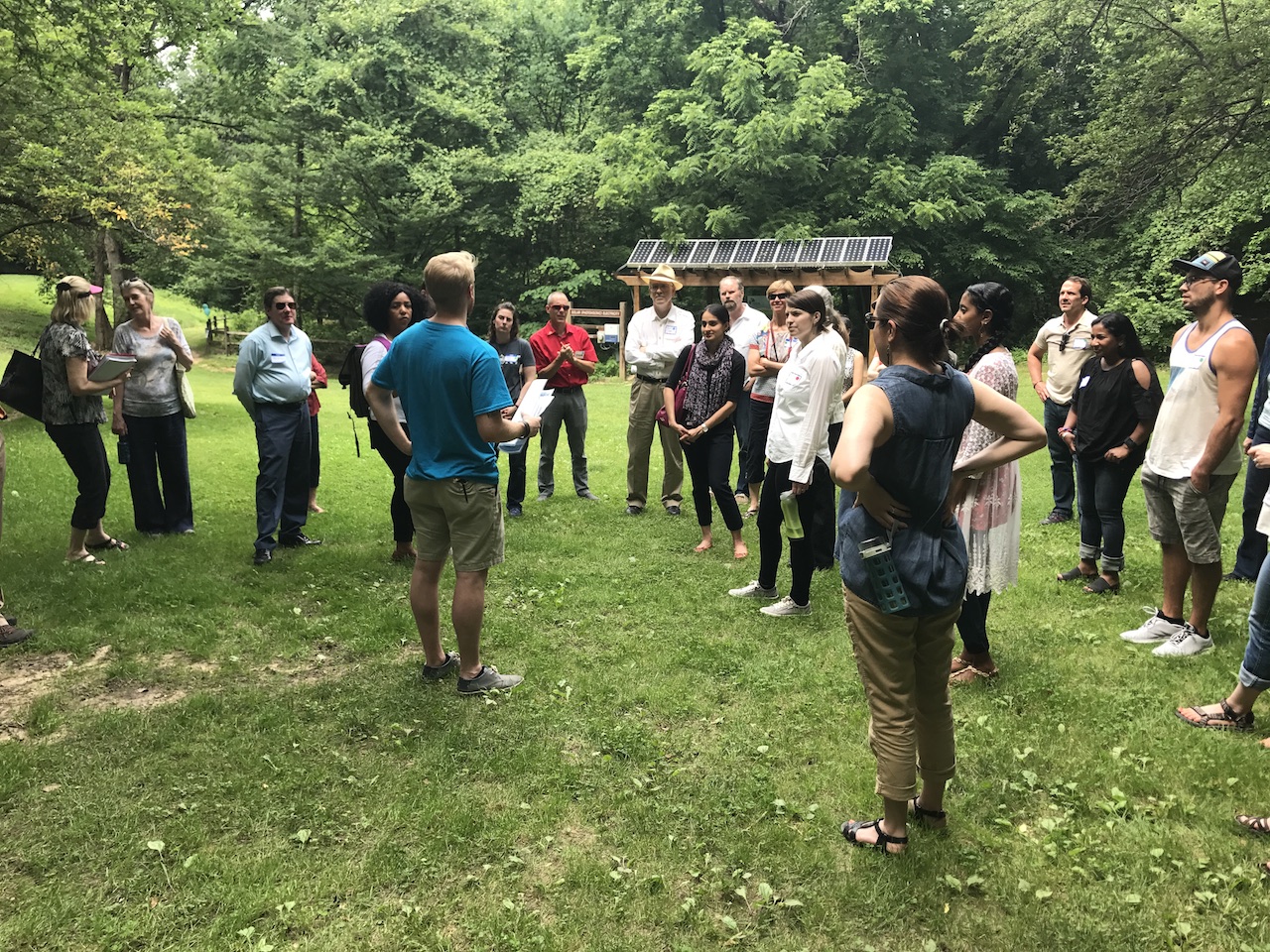 After a very fruitful day of sharing ideas and getting to know more about localized efforts, the retreat concluded with some final thoughts from the event organizers drawing attention to the big problems of environmental damage and climate change. Beth Offenbacker, Ph.D., drew attention to the fact that while on the one hand, the tasks of addressing the problems are daunting, ‘big solutions’ are also emerging that are hope-inducing.

A circle of action was formed with people stepping up to make personal commitments involving areas of specific interest such as on reducing waste.

Next steps include the consideration of a Green Leaders Impact session to explore project incubation, green leader development, and growing the green network.  This may be carried out in small groups of 3-5 people who are working on local projects on the different aspects of SDGs to help identify initiatives that can nurture and grow.

Aparajita Banerjee, Ph.D. in Environmental and Energy Policy, is interested in exploring how effective policies can be framed and implemented to transition to a sustainable and alternative future. Her expertise are in bioenergy and renewable energy, sharing and circular economy, and degrowth. Apart from publishing in different peer-reviewed journals, she has recently co-edited a book titled “Environmental Policy and the Pursuit of Sustainability.”

Leaders in Energy’s Four Gen Awards: A Look Back Over the Years