Potential Energy DC (PEDC) and Leaders in Energy hosted their sixth annual green financing forum on Thursday, January 23. This year’s event, “Green Project Financing for Growth” was sold out, and looking at the program it’s no surprise. Program planners for the two organizations brought together a veritable brain trust of green bank, finance, and energy industry leaders who discussed a wide variety of issues and provided insights into best practices.

Arlington Economic Development (AED) generously provided the program’s venue.  AED, which is a part of the Arlington County Government, is dedicated to the preservation and enhancement of an economically competitive and sustainable community, and the creation of exciting, diverse, and amenity-rich places. AED provides visionary leadership and superior services to Arlington’s business community, its tourism industry, and its real estate development. Marian Marquez, Director Business Investment, welcomed the crowd noting that clean energy companies are among the targets the County is heavily recruiting. As an example, she pointed to Amazon’s recent selection of Arlington as the site for its HQ2, noting that their RFP asked about the types of clean energy companies, policies, and activities the county already had.

She opened the discussion by noting that Montgomery County Maryland was the first county in the US to declare a climate emergency, setting forth an ambitious set of greenhouse gas emissions reduction goals. Likewise, Janine gave a nod to DC’s Mayor Muriel Bowser’s pledge to make the District climate resilient and carbon neutral by 2050.  She pointed out that big ambitions will require big funding and that both Montgomery County and DC have created green banks to help them move forward in the green energy transition.

Alex Kragie spoke first and provided context for comments. He noted that climate change is the “really big problem”, one that is no longer up for debate and around which the politics in DC haschanged dramatically. Two factors, the billions of dollars of damage to military installations and the unprecedented flooding in the Midwest, he feels have put the issue forefront on politicians’ minds. In spite of this political awakening, Kragie noted there is a lot of work that needs to be done vis-à-vis the amount of investments being made to combat climate change. As a point of reference, he cited Bloomberg New Energy Finance noting that in 2018 approximately $65 billion was spent; 10% more than had been spent in 2017. Yet, the 2018 number wasn’t much more than the $62 billion spent seven years prior in 2011. Further darkening the waters Alex pointed to Wood Mackenzie research that estimates it will cost $4.5 trillion over 10 to 20 years to transition the US power grid alone from carbon. In short, the levels of necessary investments required to make a difference aren’t even close to being reached. 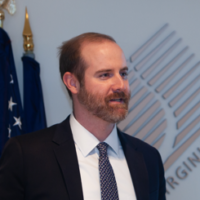 Kragie noted that much of the attention given to policy debates tends to focus on the “sticks”, for example regulatory responses, clean energy targets, and carbon pricing. All of these he acknowledged need to be done, but more attention also needs to be given to the “carrots”, i.e. green banks. He explained that green banks aren’t depository institutions, instead, they serve to facilitate connections and relationships between clean energy projects and the capital required to bring them to life. They serve to maximize the deployment of clean energy projects within their jurisdictions.

In practice, green banks in the consortium have created more than $4 billion in total investments since 2011; not an insignificant number, but still far below what’s needed to make the necessary difference. At the Federal level, Kragie noted that there is a piece of legislation, The National Climate Bank Act, that is gaining traction. The National Bank would be capitalized with $35 billion, and managed by an independent, non-profit entity. It would have three main activities. First, it would provide support to existing state green banks to help them scale their own activities. Second, it would directly fund Federal activities, particularly important for larger-scale projects. Third, it would be charged with establishing state and local green banks.

Tom Deyo followed Kragie, and began his comments with recounting the beginnings of the Montgomery County Green Bank (MCGB) with $14 million in 2016 provided by Montgomery County. From these humble beginnings, Deyo laid out the progress his group has made in moving local markets with a total of $25 million received from the County to date. With these funds, the MCGB first targeted the industrial commercial sector, looking at Michigan Saves as a model. With three lender partners initially lined up, Deyo noted it still took 18 months for two projects to be started and anticipated working with its lender partners on loans in the $50,000 range. Each project however exceeded expectations; one loan was for $200,000, a second was for $800,000. As well, the bank facilitated an additional $400,000 bridge loan, evincing its ability to be flexible in its lending practices. 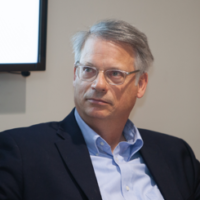 Key to MCGB’s success, Deyo points out, have been two abiding aspects. First, is recognizing that each project is unique and offering one-size-fits all products will not work. Second, is conducting aggressive outreach in different markets. More recently, the bank has been developing a residential product that it will launch in early February 2020, partnering with two credit unions to provide loans. Affordable housing is another area into which the bank has expanded, which provided unique challenges with respect to capital stacks. MCGB conducted a technical assistance program, and proposed a financing package for consideration to the property owners. Community solar projects are also a new area of focus for the bank, partnering with Groundswell. Finally, the bank has moved to develop power purchase agreements (PPAs) for projects of less than 50 kw, working to launch this product in the spring of 2020.

The final panelist was Cheryl Chan, representing the DC Green Bank (DCGB). She began laying out DCGB’s history by noting that it started with the District of Columbia Green Finance Authority Establishment Act  signed by Mayor Muriel Bowser in July 2018. The Act established the DC Green Bank is a quasi-governmental financial institution and officially made DC the first US city to establish a green bank. Its primary mission is to accelerate the deployment of clean energy, energy efficiency, and resilient design by leveraging private investment and is capitalized through 2025 with $105 million from the Renewable Energy Development Fund(REDF) and the Sustainable Energy Trust Fund (SETF). Alluding to earlier comments, Chan noted that this amount is nowhere near the estimated $1.8 billion to $2.3 billion needed to meet DC’s climate change goals. 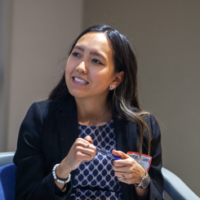 Chan continued by speaking about the DC Clean Energy Omnibus Bill passed in 2018, that laid out its climate goals: achieve carbon neutrality by 2050, achieve a 50% reduction in carbon emissions by 2032, achieve a 50% reduction in energy consumption by 2032, and derive 100% of its energy from renewable sources by 2032. Another aspect of the Bill included the Building Energy Performance Standard (BEPS), that mandates that as of 2021 owners of buildings larger than 50,000 ft2 that operate below an energy standard had to bring up their performance within five years. The DCGB would then fill the role of helping building owners finance the necessary upgrades and improvements to meet the standards.

The DCGB is currently in its administrative development phase and as yet has no products or programs in the marketplace. It’s passed bylaws, created a Board of Directors, and is currently seeking an Executive Director/CEO. Its ambitious plans however include four main products:

Chan concluded that the ripple effects of the DCGB’s efforts will positively affect other areas such as creating jobs, helping the city achieve its broader sustainability goals, reducing utility costs, and overall transforming the market for a broader acceptance of energy efficiency efforts.

Agustín Cruz is Director of Programming for Potential Energy DC, a DC-area incubator for clean energy and sustainability technology start-ups. Agustín is a relationship management and business strategy professional with extensive experience in a variety of industries.