You are here: Home / Uncategorized / Audi, racing ahead on its environmental goals

Following a 2016 emissions scandal, the luxury subsidiary of the German automotive group Volkswagen has increased its commitment to sustainability.

Audi, the luxury subsidiary of the German car company Volkswagen, has made sustainability a centerpiece of the brand’s plan for the next thirty years, announcing ambitious targets on electrification. Audi plans to offer 30 electrified vehicles by 2025 and have electrified vehicles account for one third of Audi’s global sales by 2025. By 2025, Audi aims to reduce lifecycle fleet emissions by 30% and achieve company-wide net zero carbon emissions by 2050. Audi also seeks to electrify all core model lines by 2025 (Audi’s 2019 Sustainability Report pages 17 and 47). Such announcements, however, contrast with Audi’s previous commitments to diesel fuel and efforts to abridge the results of emissions tests on its vehicles.

In 2016, Volkswagen, Audi’s parent company, was fined more than $30 billion by German and American authorities for violating emissions rules. New documents emerged in June 2019 that detailed Audi’s role in Volkswagen’s attempt to sell Americans on the concept of ‘clean diesel.’  Audi engineers developed a system that would detect signs of an emissions test and would accordingly ramp up pollution controls to be compliant. However, during everyday use, the cars’ emissions were well-above legal limits. As part of a settlement with the state of California, Volkswagen invested $2 billion in the creation of Electrify America, an independent subsidiary of the Volkswagen group that is installing charging stations across California and along highways in the United States. This investment appears to represent a broader shift in the company’s commitment to environmental and social sustainability. 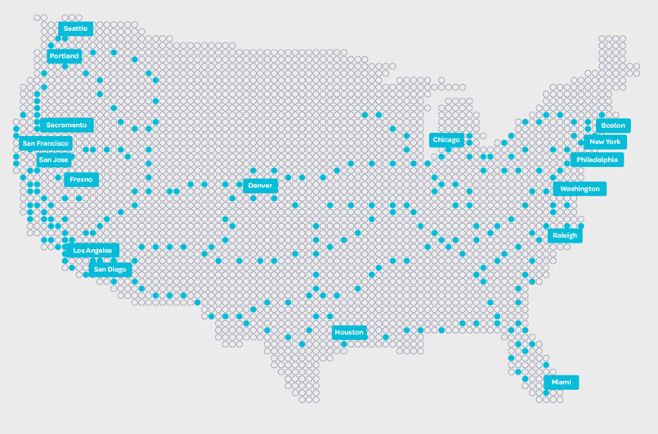 Electrify America’s plan for charging station construction over a 10-year period ending in 2027.  The company deployed 2,000 fast chargers across 42 states in 2019 and is focusing on constructing high-speed Zero Emissions Vehicles (ZEV) charging equipment along the United States highway network –Electrify America: Our Plan

In the past, the Volkswagen group in which Audi is a member has experienced issues with its supply chain. As Audi and other car manufacturers gear up to produce more electric vehicles, supply chain will likely become an even greater issue. Electric vehicles are powered by lithium-ion batteries and made with materials that include cobalt. More than half of the world’s cobalt originates in the Democratic Republic of Congo (DRC). According to Amnesty International, children and adults in the DRC work in hand-dug cobalt minds and face serious health risks. Demand for cobalt is expected to rise to 200,000 tons per year in 2020. Major technology and automotive companies, including Volkswagen, have been implicated in supply-chain investigations by Amnesty and others. Audi’s 2019 sustainability report outlined goals for increasing environmental and human rights concerns in its supply chain. Similarly, in April of 2019, Volkswagen Group announced the implementation of blockchain technology to trace materials ‘from mine to factory’ to ensure supply chain transparency.

In producing its vehicles, Audi has recently implemented the following objectives: decarbonization, water usage, resource efficiency, and biodiversity. Decarbonization refers to the reduction of greenhouse gas (GHG) emissions produced from economic activities such as transportation. Audi’s Brussels plant, the company’s first accredited carbon-neutral plant, serves as a model for how the company plans to decarbonize the production of its vehicles. The plant is powered almost entirely by renewable energy, including 89,000 square meters of solar panels that cover the plant’s roof. Audi’s Hungary plant in Győr, powered by a mix of a geothermal heat supply and photovoltaic panels will become Audi’s second net-zero production plant by the end of 2020. In terms of water and resource efficiency, Audi’s Mexico plant in San José Chiapa recycles 100% of generated wastewater. Finally, Audi has worked to promote biodiversity around its operating sites by converting 17 hectares of its Münchsmünster plant into natural land, hosting more than 110 plant species. Such efforts appear to be bearing fruit as the company’s GHG emissions are slowly declining.

Cars are not only one of the leading causes of air pollution, emitting tropospheric ozone and particulate matter, but also contain many hazardous substances internally. The idea of a circular economy goes beyond the elementary school mantra of ‘reduce, reuse, recycle’ and argues that products should be developed and produced with their lifecycle in mind. Instead of developing products with small lifecycles to intice customers to purchase a new product or newer version of the product, companies would build products meant to last and consider the lifecycle implications of the materials they use. In following the German tradition of being masterful recyclers, Audi has developed a database called the International Dismantling Information System (IDIS). With the help of this system, Audi facilitates the dismantling of its vehicles, the disposing of hazardous substances, and the recycling and refurbishing of components such as engines transmissions, axles, and electronic parts. In addition to assessing the lifecycle of the materials used in its cars, Audi is also working to expand its electric vehicle portfolio. 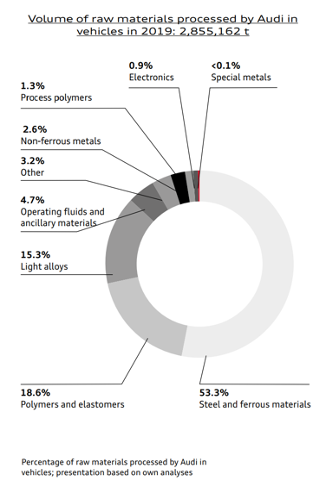 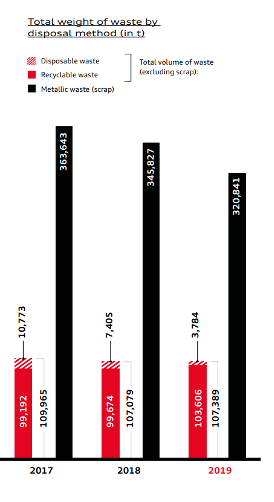 Expansion of EVs and Charging Infrastructure

To understand Audi’s electric vehicle goals, I spoke with Audi of America’s Government Affairs Director Spencer Reeder. Reeder began his career in the physical sciences, working as an aerospace engineer, and then as an earth scientist for University Corporation for Atmospheric Research (UCAR) which is also home to the National Center for Atmospheric Research (NCAR). As he traveled the world in Asia and central America for earth research, he became more and more interested in the intersection of climate and policy. After a policy fellowship in Europe, he worked on climate policy for former Washington Governor Chritene Gregoire.  Next, he managed the climate philanthropy efforts of Microsoft co-founder, Paul Allen, which led him into the transportation sector and finally to a job in government affairs at Audi. In his role, he works with partners such as Electrify America to expand charging infrastructure and expand the adoption of Audi’s plug-in vehicles in the U.S. market.

I asked him how many charging stations we will need for it to be possible to phase out the gasoline-powered private car and he responded that “no one knows that answer with 100% confidence.” He underscored, however, that “there is not enough charging infrastructure in the United States,” and clarified that such infrastructure is adequate in “only a small handful of cities.” Reeder explained that “most Audi customers have access to home charging systems,” facilitated in part by the company’s partnership with Amazon Home Services. According to Reeder, that home charging station should satisfy “90 to 95% of your driving needs,” although he acknowledged that such systems don’t necessarily work in apartment buildings and high density cities. To accommodate long trips and living situations without garages, the 2020 Audi e-tron comes with 1000 kwh of free charging with Electrify America and Reeder emphasized that Electrify America will have “500 direct-current fast chargers (DCFCs) installed by the end of the year.”

When asked if the COVID-19 pandemic changed Audi’s priorities in relation to sustainability, Reeder responded that “COVID-19 has highlighted the importance of this.” He maintained that sustainability is one of the pillars of Audi’s mission and that although the company will experience some duress, “that does not deter our commitment to sustainability.” As companies in the United Kingdom and mainland Europe slowly bring their plants online, will companies stay committed to the idea of a green recovery?

More than 200 central bankers, finance ministry officials and leading economists as well as top EU officials have stressed the idea of a green recovery. Since EVs and charging infrastructure would be integral to such a plan, the state of the electric vehicle market should be examined. In the United States, Tesla still dominates the electric car market, but the aforementioned investments of Volkswagen and other players promises to make the race more competative. For example, General Motors, owner of Chevrolet, Buick and Cadillac, has committed to an all-electric future, working with EVgo, ChargePoint and Greenlots to create an EV-charging network of more than 31,000 ports.

China is the world’s largest electric vehicle manufacturer and buyer. Following massive government support for the industry, Chinese EV manufacturers tripled to 400 registered nationwide, including companies such as NIO and CATL, an electric battery maker that supplies BMW. Abidjan, the capital of Côte d’Ivoire, has embraced electric buses to transport college students to the University of Félix Houphouët Boigny and Uganda and Rwanda have sought to lead East Africa in expanding EV infrastructure. In Latin America, Mexico has been leading the way in an EV revolution as EV rose by 90% in 2018.

The EU’s Green New Deal is poised to be at the heart of the bloc’s COVID recovery package and city leaders across the world have joined the growing call for a green recovery. Thus, it seems as if Audi and the Volkswagen group’s shift from extolling the virtues of ‘clean diesel’ to investing in EVs has come at the right time. However, ensuring that the company’s supply chain respects human rights will be necessary as Audi acts on its ambitious environmental goals. Similarly, public policy such as carbon pricing and green infrastructure investments will be essential to achieving the desired green recovery from the coronavirus pandemic. 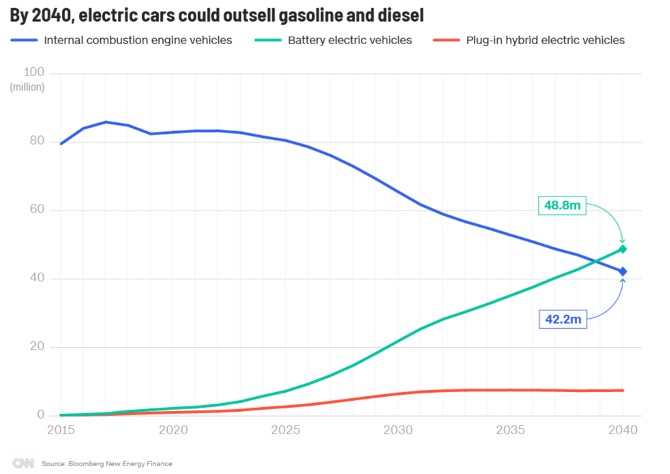 Why the environmental movement should stand up for Black livesGivePower, a model for sustainable development