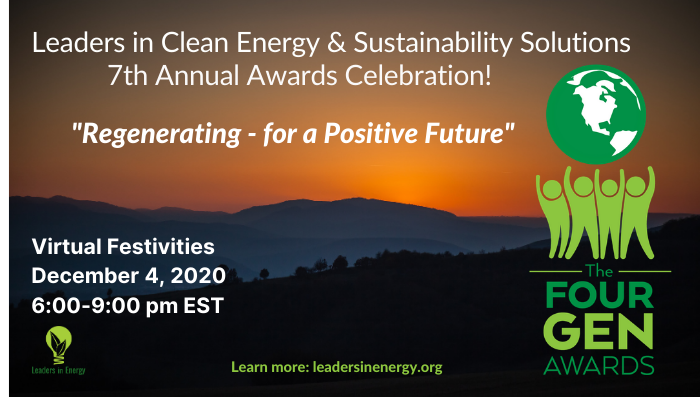 THIS EVENT IS FREE – thanks to our very generous sponsors!
A gift to everyone in these challenging times – please join us!!!

WELCOME– We invite you to join us for our Seventh Annual Four Generation of Leaders in Clean Energy and Sustainability Solutions AWARDS CELEBRATION.   The “Four Gen” Awards! This year’s theme is “Regenerating – for a Positive Future!”

We are honoring multigenerational leaders who are helping to regenerate natural systems and economies to create prosperity and resilience through projects, programs, and initiatives that connect with this theme.

SOCIAL HOUR: 6:00 – 7:00 pm
Small Group Networking Session to Connect with Other Forum Attendees: 6:00 –6:30 pm
“Solar-Powered” Green Cocktails – Learn how to make a “50 Shades of Green” and” Shenandoah Old-Fashioned” cocktails and mocktails from John Shope, from Catoctin Creek Distillery.  In 2013 they installed a 41kW solar array which offsets about 85% of electrical usage in the distillery.  They source local grains for their products. (6:30 – 7:00 pm) 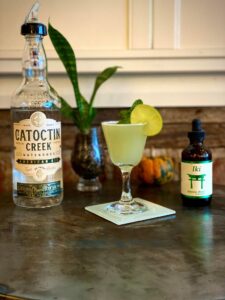 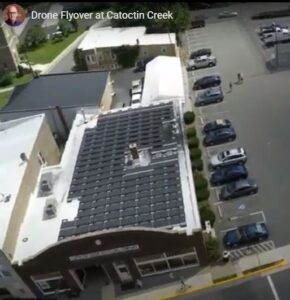 AWARDS PROGRAM (7:00 – 8:15 pm)
Be inspired by our Four Generations Awardees (and Lifetime Achievement Awardee! – Learn more about them further below!

Why this year’s theme? Many studies now point to the necessity for a fundamental and encompassing transformation in how our society conducts its activities. The World Economic Forum report alone identified 15 systemic transitions with annual business opportunities worth $10 trillion that could create 395 million jobs by 2030. Together, these can pave the way towards a human- and nature-positive development which will be resilient to future shocks. (See links below to World Economic Forum* and Global Commission on Economy and the Climate**.)  Our theme categories included:  Clean, Efficient, and Reliable Energy; Big Picture, Long-term Planning for Sustainability; Circular Economy and Innovative Regional Development; Ecosystem Restoration; Innovative Businesses and Entrepreneurship; Regenerative Agriculture; Resilient Communities and Prosperity Redefined; Steady State Economy; and Climate Restoration

* The Future of Nature and Business)
** (Unlocking the Inclusive Growth Story of the 21th Century: Accelerating Climate Action in Urgent Times),

Become a sponsor and show your commitment to clean energy and sustainability solutions!  Learn more here!  (Contact Marty Silber, Leaders in Energy Director of Development and Fundraising, at marty.silber@gmail or call or text 571-236-5396).

Thanks to Our Sponsors 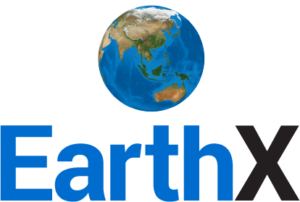 LEARN MORE ABOUT OUR AWARDEES HERE 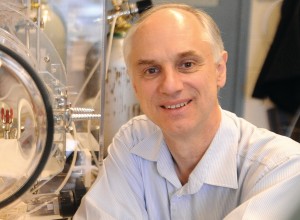 Dr. Klaus Lackner is the Director of Center for Negative Carbon Emissions and professor at the School of Sustainable Engineering and the Built Environment of the Ira A. Fulton Schools of Engineering, Arizona State University. His research has focused on closing the carbon cycle by capturing carbon dioxide from the air, carbon sequestration, carbon foot-printing, including the use of “artificial trees” to offset carbon dioxide emissions.

Klaus Lackner makes artificial trees – but not the kind that decorate living rooms and lobbies. His artificial trees can capture carbon dioxide directly out of the air—and they’re 1,000 times more efficient than nature’s trees in doing so. These trees don’t look like natural trees – they don’t have leaves or branches. But they function in a similar way by absorbing carbon dioxide out of the atmosphere. Millions of the trees could eventually generate “negative carbon emissions,” meaning they could take more carbon dioxide out of the air than is emitted from fossil fuels. This can help to reverse the course of climate change. Learn more here.

Trained as a theoretical physicist, he has made a number of contributions to the field of carbon capture and storage since 1995, including early work on the sequestration of carbon dioxide in silicate minerals and zero emission power plant design. In 1999, he was the first person to suggest the artificial capture of carbon dioxide from air in the context of carbon management. He received his PhD in Physics from Heidelberg University, Germany.

Tonya Graham leads the Geos Institute’s ClimateWise program helping communities build resilience in the face of climate change. She has taken a lead role in developing the concept of Whole Community Resilience, which takes a holistic approach to addressing climate change impacts and develops solutions that are both ecologically sound and socially equitable. As a member of the ClimateWise team, Tonya has helped communities adapt to changing climate conditions in Oregon, California, Montana, Alaska, Texas, Kentucky, Colorado, and Ontario, Canada. In 2012 she co-organized with the Kresge Foundation the first national gathering of adaptation practitioners: The Practitioners Workshop on Climate Change Adaptation: Integrated Strategies for Human and Natural Communities.

Last year, she and her ClimateWise team launched Climate Ready Communities, an “assisted do-it-yourself” climate resilience planning program that provides affordable assistance to small, mid-sized, and/or under-resourced communities nationwide. She is a co-author of A Practical Guide to Building Climate Resilience, a free, step-by-step planning guide which serves as the foundation for the Climate Ready Communities program. Tonya served on the Project Advisory Committee for Community-Based Adaptation in the United States: Understanding How and Why Communities are Taking Action and is a member of the American Society of Adaptation Professionals. She holds a B.S. in Biophysical Environmental Studies from Northland College and a M.A. in Community Development from Goddard College. 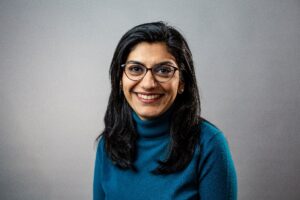 Akanksha Khatri is Head of Nature Action Agenda for World Economic Forum’s Platform for Global Public Goods. Ms. Khatri was the lead author of the report, “The Future of Nature and Business,” shows how 15 strategic transitions can halt nature loss by 2030 while providing economic growth and jobs which inspired the theme for our Awards this year.

Prior to this, she worked as Lead on Government Engagement for India and South Asia followed by an extended remit as Chief of Staff and Head of Strategy and Performance for the Forum’s Regional and Government Engagement globally. She has also had experience working at HT Media Ltd. which is the second largest media company in India. She holds a BA (Hons.) from Jawaharlal Nehru University, India and M.A. in International Affairs from Columbia University, USA. She was a Global Leadership Fellow with the World Economic Forum (2013-16). 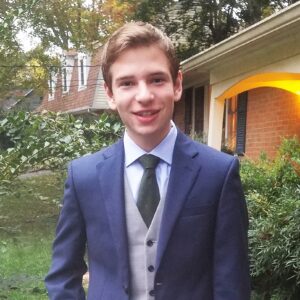 Jerry Achtermann attends Oberlin College studying Music Theory and Composition. As a 7th grader frustrated by the Fairfax County Public Schools’ use of polystyrene trays in the school system’s cafeterias, Jerry Achtermann decided to try to eliminate them. In 2015, he created a petition on change.org and thepetitionsite.com, garnering approximately 500 signatures from across the state, the country, and the world. He spoke on Arlington County’s Sustainable Scoop and created a Prezi presentation, then met with the FCPS school board to present his evidence on the environmental and health dangers of polystyrene. His efforts resulted in the county’s elimination of the trays and their replacement with compostable cardboard trays.

In addition to addressing the critical environmental, health, and sustainability challenges posed by polystyrene trays in FCPS schools, Jerry showed that kids can make a difference in our community’s environmental health and our way of thinking about our impacts on the environment. They can educate others and promote change in unsustainable policies. His initiatives can serve as a role model for others in Gen Z concerned about our environment and our sustainability, encouraging them to take action. 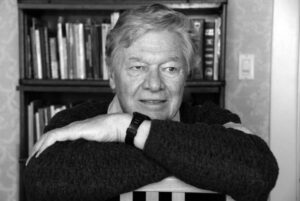 Peter Seidel is the author of the new book titled Uncommon Sense: Shortcomings of the Human Mind for Handling Big-Picture, Long-Term Challenges published by the Steady State Press.”   He holds a B.S. in Architectural Engineering from the University of Colorado and a Masters in Architectural Planning from the Illinois Institute of Technology.  Seidel has served as a faculty member at the University of Michigan and Virginia Tech, and he also taught at Central China Institute of Science and Technology.

After having been a farmhand, factory worker, Alaska salmon fisherman, and carpenter, Seidel became a student of renowned architect Mies van der Rohe and city planner Ludwig Hilberseimer.  Around 1960, while working in Chicago on office and institutional buildings that he came to realize were environmentally damaging, he read a book describing the dangers of excessive population growth and looming resource shortages. Disturbed by this, he turned to teaching (over time, at five different institutions including universities in China and India)

and developing ideas on environmentally and socially sustainable communities. This led to employment as master planner for a community of 60,000 outside of Cincinnati, Ohio. When this project was halted because of funding problems, he took up developing, designing, and building energy-conserving urban infill projects on vacant inner-city parcels. 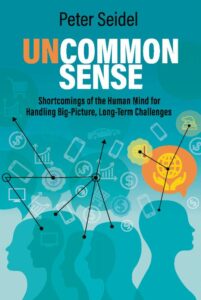 As public interest in sustainability evaporated after the end of the Arab oil boycott during the Reagan Administration, Peter started to investigate the troublesome question of why, when we understand the many environmental dangers we face, we don’t take meaningful action to deal with them. This led to publishing a number of articles in academic journals on this subject and three books: Invisible Walls: Why We Ignore the Damage We Inflict on the Planet…and Ourselves, Prometheus Books, 1998; Global Survival: The Challenge and Its Implications for Thinking and Acting, edited by Ervin Laszlo and Peter Seidel, SelectBooks, 2010; and a novel dramatizing the likely future consequences of environmental neglect and indifference, 2045: A Story of Our Future, Prometheus Books, 2009.