You are here: Home / 2019 Four Gen Awards and Holiday Program 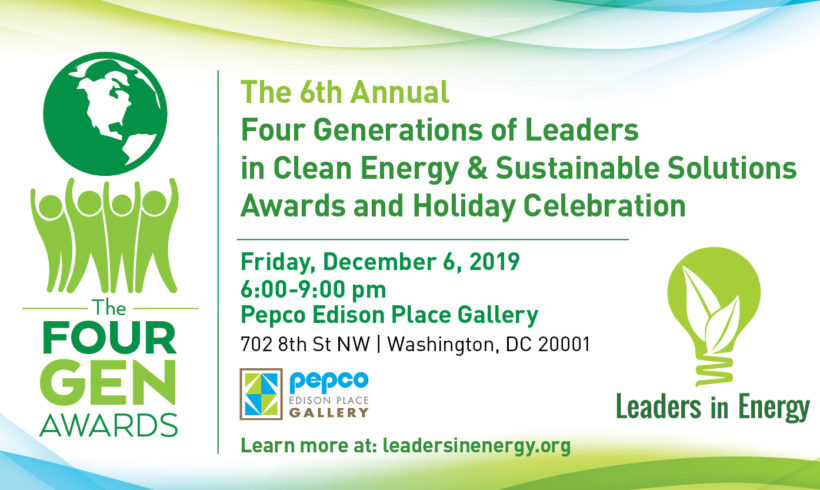 (Download event flyer HERE to help us pass along the word! — BECOME a Four Gen Benefactor by contributing a green good or service to our Silent Auction. Help us as a small nonprofit organization spread Big Ideas, receive a complimentary event ticket, and great publicity for your company or organization.  Learn more HERE.

NOTE: It’s Cyber Savings time – and we have TWO special offers for you to attend the Four Gen Awards Celebration this Friday! Now you can bring along a friend, or even two friends, and save!

How? Buy one ticket at regular price and then get up to TWO more tickets for half price! Even if you have already purchased your ticket, you can still take advantage of this offer! We’ll tell you how to do it below.
Here’s how to attend and take advantage of our CYBER SAVINGS special offers!

• Click the button below and you can register up to 2 guests and receive a 50% discount for them.
• If you have already registered and would like add up to two friends to join you, you can take advantage of this discount by registering each person and applying a LEGUEST50 promo code.

—LEARN and BE INSPIREDby this year’s honorees – whose ages span from teens to 80s.

–We are never too young or too old, or middle-aged, to make a true difference!These DIVERSE LEADERSare working in energy efficiency, clean energy, reducing plastics and food waste, and sustainable communities.

–Join in our SILENT AUCTIONwith its exciting array of opportunities! Bid on memberships and event tickets for environmental and clean energy groups; on green books; an environmental documentary;  and a Nissan Leaf 4-Day electric auto excursion – plus more!

–Everyone is needed to create the ENERGY TRANSITIONandRE-GREENING of our ways!

Our Four Generation of Leaders
in Clean Energy & Sustainable Solutions Awardees are:

Our 2019 Four Generations of Leaders Sponsors and Benefactors

Our 2019 Four Generations of Leaders Awardees 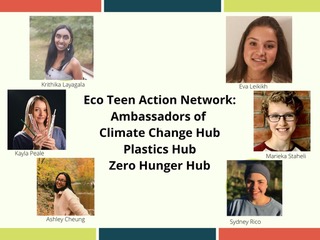 The Eco Teen Action Network is a collaboration between the Smithsonian Conservation Commons Earth Optimism Program and the Global Co Lab Network to empower teen leaders to take ideas to action. We focus on replicable, scalable solutions that also can serve as a catalyst for advancing other sustainability initiatives to address the myriad challenges faced by society due to climate change and the global environmental and societal crises. Young people are the engine driving intergenerational advocacy and action to achieve the urgent transformative change needed across sectors for a smarter and greener future.

The Network is being honored for the work being undertaken by its 3 Hubs in Climate Change, Plastics, and Zero Hunger (with a focus on reducing food waste).

As Co-Founder and Managing Director, Julia brings nearly three decades of experience to Plastic Pollution Coalition in leading executive, strategic, communications, fundraising, and outreach efforts for a wide range of government, entertainment, and non-profit groups. Julia is a founding collaborator of PPC and recently was the Senior Director of External Engagement at the Environmental Working Group (EWG). 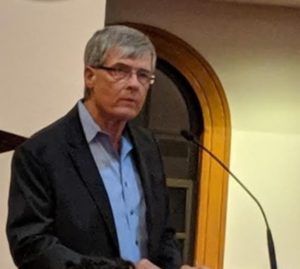 Dr. Eric Goplerud is a clinical psychologist, until his retirement in 2018 Vice President and Senior Fellow at NORC at the University of Chicago, and founder and chairman of the board of the Faith Alliance for Climate Solutions. Previously, Dr. Goplerud was a research professor in the Department of Health Policy at George Washington Medical Center, and Associate Administrator for Policy and Planning at SAMHSA. Professionally, he is a nationally recognized behavioral health policy expert and researcher.

Dr. Goplerud has a long history organizing and leading interfaith organizations focused on energy efficiency, energy conservation, and resiliency, much of this focused on low income and disadvantaged citizens of Virginia. In the five years since he founded the Faith Alliance for Climate Solutions, he has facilitated its growth to more than 75 congregations throughout Northern Virginia. He has helped start a sister organization, Montgomery County Faith Alliance for Climate Solutions, which focuses on advocating for local solutions to climate change. Dr. Goplerud was appointed to Fairfax’s County-wide Energy and Climate Action Plan taskforce, the County’s representative on the Air and Climate Public Advisory Commission (ACPAC) for the Metropolitan Washington Council of Governments, and the Virginia Department of Health’s taskforce on climate change and public health. He is leading the expansion of EcAction Arlington’s Energy Masters program to Fairfax, which trains congregation teams to help increase energy efficiency and energy conservation for low income, disabled and elderly residents. He is a board member of the Unitarian Universalist Association’s national Green Sanctuary program. Dr. Goplerud frequently testifies before federal, state and local elected officials on energy and climate matters. The Faith Alliance for Climate Solutions and Dr. Goplerud have received environmental excellence awards from Interfaith Power and Light, the Unitarian Universalists for Social Justice and Fairfax County Board of Supervisors. 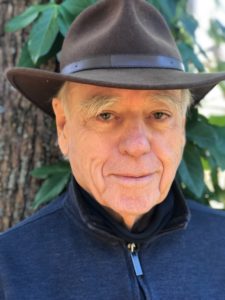 Under several Presidential administrations, Andrew Euston, Fellow of the American Institute of Architects (FAIA), led Community Sustainability federal policy reforms at the US Dept. of Housing and Urban Development (HUD). From 1966-2000, from within HUD, he conducted 34 annual Federal workshops on Urban Environmental Design. Andy introduced some of the first cross-disciplinary sustainability conferences exploring the importance of urban-rural connections, community energy programming, and environmental economics. He was the impresario for these efforts that brought together Mayors, energy scientists, and Architects, and many other actors to work together to enhance the exploration of Community Sustainability as a science.

• In the 1970’s he initiated US-DOT’s Transit Station Joint Development project that led to the creation of numerous urban multi-modal transportation centers and mixed use urban developments.

• In the 1980’s he brought about US-DOE’s multi-metro “Sustainable City Project,” led by the energy offices of San Jose, San Francisco, and Portland, Oregon.

• In the 1990’s he helped popularize the term “sustainability”. He helped promote the benefits of district energy systems, conduct working groups of the President’s Council on Sustainable Development, and continued to explore ways in which to improve communities.

Mr. Euston holds degrees from Yale and Harvard universities in Architecture and Advanced Environmental Studies. He has received numerous honors, including from the Secretary of the US Air Force, the Director of the Bureau of the Budget, the HUD Secretaries, and in 1998, the Lewis Mumford Environmental Award from Architects, Designers, & Planners for Social Responsibility (ADPSR). 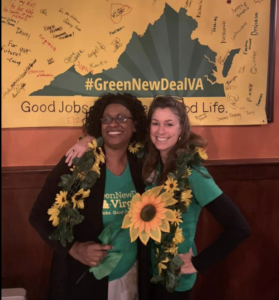 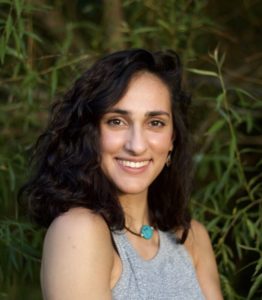 Why We Honor Four Generations: LE believes in harnessing the talents of all Four Generations – a collaboration across the ages – to advance clean energy and sustainable solutions for the environment, encompassing technology, economic and social innovation. The awards feature an honoree from each of the four generations, e.g., World War II, Baby Boomer, Gen X, and Millennial/Gen Z who exemplifies leadership in the energy and/or sustainability arenas.  Truly it takes a village to create and build a world where clean energy is the norm, where climate change has been reversed, where green jobs are the majority of the economy, and where humans live fully in cooperation with nature, for the benefit of the planet and of all life. Yes, this ideal world IS possible. It is happening as a result of Leaders in Energy members working along with countless others committed to a harmonious green world!

FourGen Awards Purpose:  We recognize leaders in the clean energy and sustainability arena from each of the four generations who can share their lessons learned and tips on leadership to our audience. This is Leaders in Energy’s sixth annual Four Gen Awards Celebration. Leaders in Energy is an inclusive organization promoting the interaction, partnership, and mentoring among all generations, with diverse backgrounds and work experiences.